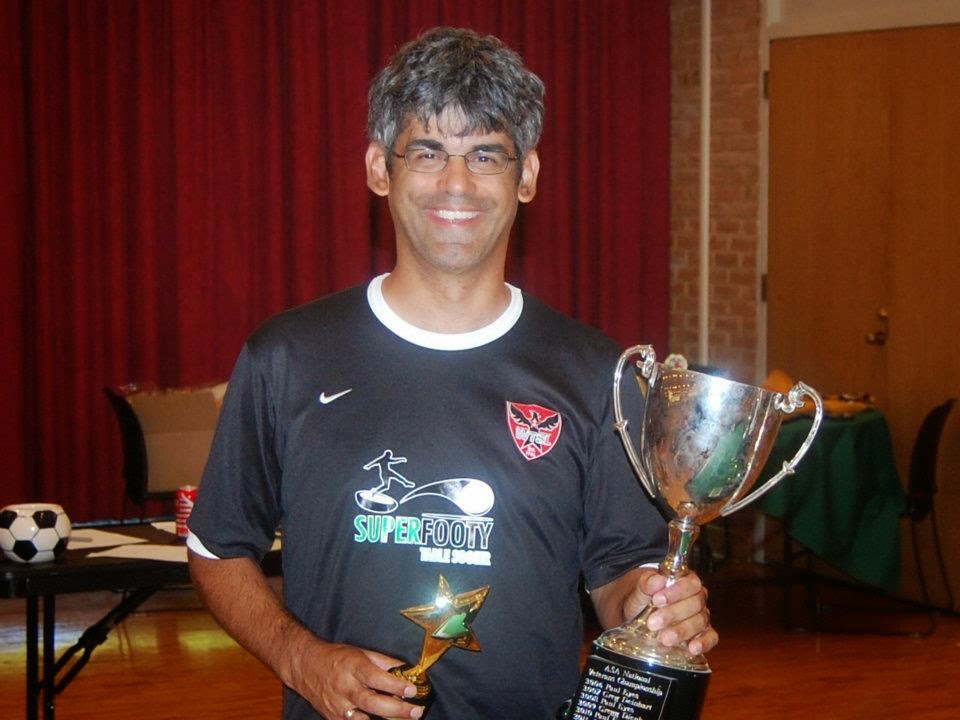 Gregg Deinhart is a legend of American subbuteo. Gregg was the first US player to attend a FISTF world cup, that was back in 1998 in Namur, Belgium. Since then, Gregg became national champion a couple of times and he's still flicking.


When did you first start to play Subbuteo and what was the first team you got bought?
GD: I got the Continental Club set for Christmas back in 1980 but we didn’t really know the rules and put the pitch on the pool table. My sister painted the “blue” team to look like Bristol Rovers because I liked that design. The first teams I purchased were a couple heavyweight teams shipped from England.

What is the best thing about this game and why would you recommend it to someone?
GD: It’s a great way to have intense competition (if you want) and still be able to go out for dinner and a beer with all the participants. The game itself combines concentration, quick decision-making, and a fantastic one-on-one mental battle with your opponent. It is the best sports game ever invented.

Your most memorable moments from this game happy or even sad?
GD: Winning the ASA National Championships are great memories for me. Participating in three World Cups was also great. Many of my best moments though came from meeting and getting to know so many great people from all over the world and having the opportunity of playing people from over 20 countries.

Who was your strongest opponent and who is your favorite player and why?
GD: My strongest opponent from my competitive days was Rick Wilcox and he is one (of so many) that I would call my favorite players. Rick and I battled for many, many years and any tournament I played, he was the one to beat. Now that I don’t play as much, EVERYONE seems like a tough opponent. There are a lot of good players here now in the USA. My favorite player list is quite long and too many to name. Of course, there is Vincent Coppenolle, Phil Redman, etc. from Europe plus all my great friends here in ASA, especially my club mates at WTSL. If I really start naming people, I’ll leave some out that deserve to be on the list!

Is it a sport or a game ? what is your opinion about this question that many people ask?
GD: I’m not sure it matters and I have not taken either side of this question, although it has been asked a lot. It is certainly an intense competition and brings out all of the mental toughness needed in other head to head sports. Physically it is not too demanding but mentally it is as draining as any sport I’ve played. If some want to call it a sport and others want to call it a game, I will not take sides.

What improvements would you like to see in the future and what would you suggest to improve things?
GD: In the USA, I’d obviously like to see more people playing. Here, I feel we need to get a better set of training videos available to all players. Also, I’d like to see us record more of our history. I don’t have much to say on the international level. I’m too far removed from it although I would love to see the folks at Hasbro work with the players again to make a competitive range of products. I think the game still could grow especially in Europe with a combination of a huge manufacturer like Hasbro working with the players of WASPA, FISTF and the National Associations.

What would you recommend to someone who starts the game now? What are the secrets for top performance?
GD: The first thing you must do is get out to a local club or travel to a tournament. There is where you get the best advice on building your pitch, selecting your bases, and getting started. By meeting up with other players you will also actually see and feel what it is like to flick properly. Without having regular playing partners, it is difficult to advance your skills although there is a lot of good footage online now to at least see how the game is played.

What are your feelings about how FISTF and WASPA are working and doing something for the game nowadays?
GD: I think both organizations fill a need. FISTF has grown and the competition is very intense now. The top players are so good that it is difficult for players starting out to even imagine the skill level needed to become a top FISTS player. Still, there are smaller tournaments where players can still be involved. WASPA is a fantastic idea and it came along at the right time. The promotion of the game needs to be done at all levels and WASPA really gives the all players a chance to be involved in this worldwide competition. It is great to see the reporting of scores from local clubs and small associations promoted by WASPA. This is a much needed link between the local clubs and the big FISTF events.

What would the WASPA rankings? Do they mean something for you?
GD: Rankings mean a lot less to me now than they did when I was really playing a lot of competitive matches. I really enjoy rankings points and like the feeling that you are additionally connected to other players through a point system. I think WASPA rankings will happen and will serve a useful purpose to further unify the players who do not compete in FISTF events. Many of the international football leagues have many levels and I think WASPA rankings would follow that model. More important than rankings, I see a need for new players to share technical and tactical information to improve the game as a whole for all players. It would be fantastic for top FISTF players to create a series of tips for the up and coming players.