The results of the Barcelona tournament and the new rankings are published in the updated version of the "Golden Book". Check the download section to see the recent updates and enjoy!
Publié par Vincentcop à l'adresse 12:32 No comments:

A great turnout for the Barcelona tournament

The club of Palomar Ateneu de Sant Andreu Futbol Taula organized their very first WASPA tournament on sunday. It was a great chance for many beginners to discover the atmosphere of tournaments. 30 players were competing in six groups of 5 players. After the first round,t he winers of each group qualified for the playe-offs. In that stage, Flavio Watzka and Luis Benito managed to qualify for the grand final. Luis Benito won on shots after a scorelesss game. Joan Galtés is 3rd, Daniel Muñoz 4th, Marcos Membrive 5th and Guillem Alsina 6th.

Tournament in Spain - The very first WASPA tournament will take place in Barcelona on sunday. Organizer Flavio Watzka said about 30 players will be competing in the different categories. 12 of them will have the privilege to play for the WASPA title. Good luck to everyone.

Fan of Lille? - Some football fans are also subbuteo fans. Don't miss the link of Florent, a guy from Lille who is also a big fan of the Lille football team. Check this great link at http://florent-subbuteomania.blogspot.com/

Top 10 nations this week on the blog - This week the bigger number of visitors were from Germany, Finland, the US, Russia, Ital, Greece, France, Spain, Sweden and Belgium.

Have a great week-end and keep on flicking,
Vincent
Publié par Vincentcop à l'adresse 17:14 No comments:

Today is a special day for our little community as Joseph M. Debono is celebrating his birthday. Joseph is the oldest player in activity in the WASPA circuit but also a great organizer at Attard Subbuteo Club! Happy birthday Joe!
Publié par Vincentcop à l'adresse 16:41 No comments:

Results of the survey - The huge majority of people who answered the survey think WASPA and FISTF should not merge. Only 16% of votes say both associations should merge. Thanks for your comments!

Subbuteo Art Print - If you like table football and art, this is for you. Thanks to Gareth Christie, you can now have beautiful subbuteo pictures on your wall. Check the links at http://presentspotter.com/presents/subbuteo-art-print & http://www.table-football-wall-art.com/

Top 10 nations this week on the blog - This week the bigger number of visitors were from Germany, the UK, the US, Finland, Greece, Italy, Russia, Spain, Belgium and Malta.

Have a great week-end and keep on flicking,
Vincent
Publié par Vincentcop à l'adresse 10:13 No comments:

Poster of the Barcelona tournament

The poster of the Barcelona tournament has been revealed. Well do to the organizers for preparing a great event! 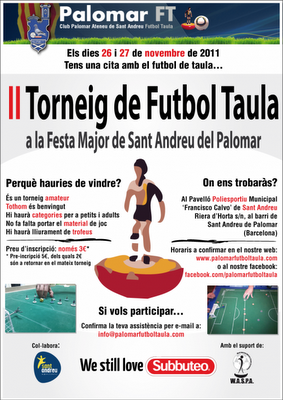 Is there an issue for FISTF? - Last week, I was ratjer enthusiast about the future of FISTF because the end of Piero Capponi's presidency and the hope to have elections in February was very positive for the future of the sport. Of course, many things need to be built again from scratch but there was a strong hope that good people could build a strong future by working hand in hand. Unfortunately, things change very fast and not always in the right direction. Laurent Garnier, the General Secretary of FISTF, was named President of FISTF and, by surprise, he was "confirmed" as being president till the next Congress... in 2015. The simple fact that there might be no elections in February proves the people int he FISTF Board only think about their own interests and not about the good of the game and the needs of the community. Having a Board working against the basic principles of democracy and against the expectations of the players and the national associations will prevent out community to work serenely.

In such a situation, WASPA might take more and more importance because I expect many disappointed players to look for "something else" and hopefully WASPA could give a positive answer to the questions of the players who are unhappy with FISTF. As several national associations have already written to Laurent Garnier to say they are unhappy about the latest changes, we hope that the FISTF Board will answer to the expectations of the players and that good sense will prevail. Until possible elections, a lot of things might happen. Wait & see...

Competion: create the new WASPA banner - I recently had several messages from players telling me the WASPA blog is fine but they don't like the picture on top of the blog. So there is an open competition to give the possibility to everyone to send proposal for a new banner. All ideas are welcome. The banner can just be a picture but the WASPA logo can also be included. All proposals should be sent by e-mail to Vincent.cop@rsca.com
Thanks in advance!

Top 10 nations this week on the blog - This week the bigger number of visitors were from Germany, the US, the UK, Spain, Finland, Greece, Belgium, Russia, Malta and Australia.

What future for FISTF? - Important facts happened in the last few days in FISTF. After the European cups played in Slovenia, president Piero Capponi decided to resign and he was followed in his decision by Sports Director Stefano De Francesco. Both men had an important role in the FISTF Board and their decision will probably involve a lot of important changes in the future. Piero Capponi said elections should be held in February at the Major of Mons but this has to be confirmed. Whatever happens, it will be difficult for FISTF to get back on the right track after all the mess of the last two years. Since a few people decided to take over things after the world cup in the Netherlands in 2009, a lot of promises have been made to change the main international body. The new Boards, firstly led by Malta's Silvio Catania and later by Spain's Piero Capponi, wanted to make a more professional game, to introduce professional rules and to get more media coverage and sponsors. Even if some ideas were good, they were probably not realistic and the community is not ready to change his attitude. It's not only about the game itself but new rules about the size of the figures have not been appreciated by many players and there were some incidents last week-end in Slovenia when players were told they were not allowed to play because the figures were smaller than 27 mm.

So what will be the direction of the new Board? Will people continue to dream about a professional game or will we get back to a more "human scale" where the game remains the priority? Should we insist on having large venue with perfect tables or should we just insist on having tournaments with many games for every player and a better organisation of games? There were no scoreboards at the Europa Cup and nowhere to have a drink or something to eat in the hall and this is certainly not what players expect from a major tournament, in particular when they travel thousands of kilometers to play.

It will take some time before elections are held and before new people take over things again from scratch. The fact the next world cup will be held in July in Greece involves it will certainly be one of the worst events in terms of attendance. The new Board has there to take the right options to make the world cup something special and a priority for all players who are qualified to play.

The future of WASPA will of course depend on the future options of FISTF. Some voices say both FISTF and WASPA should merge and an amateur circuit should be organized under FISTF banner. This will only be possible if the new Board is able to make a difference between the players who just play for fun and those who play to win.

For the moment, WASPA is still taking its own way with a small circuit of tournaments and hopefully more clubs and nations will join the circuit in the next few weeks. Ideas and suggestions are always welcome so please don't hesitate to send your views by e-mail at vincent.cop@rsca.com

Another tournament in Malta - The next tournament to be organized by Attard SC will take place on December 9 in the evening and details are available from Joe Debono at jmdebono@onvol.net

Congratulations Pisa and Bologna - The WASPA community wold like to congratulate the team of Black & Blue Pisa, winner of the Champion's League, and the team of Bologna Tigers, winner of the Europa League. Both tournaments took place last week-end in Nova Gorica, Slovenia.

Top 10 nations this week on the blog - This week the bigger number of visitors were from Finland, Spain, Italy, Greece, germany, Singapore, the US, Canada, France, and Malta.