Daniele Spadaro wins in Malta - The finals of the Attard tournament finally took place on tuesday. Daniele Spadaro had to wait the shoot-out to beat Simon Gauci in the semi-final. In the other semi, Hector Scerri beat Gordon Caruana and qualified for his first final. In the final, Spadaro gave no chance to Scerri and won the game on a clear 2-0.

On the picture, the Mayor of Attard Mr Stefan Cordina presenting the trophy to Daniele Spadaro. 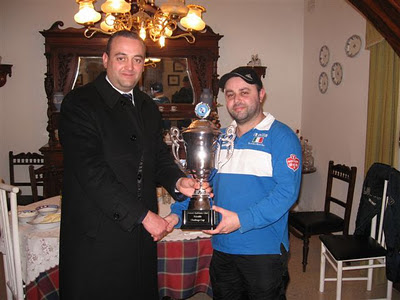 Daniele Spadaro back as number 1 - Thanks to his recent victory in Attard, Daniele Spadaro is the new leader of the WASPA ranking again. Daniele was already leading the table in August but he had to admit Darren Bezzina's supremac from September till December. The full rankings are available in the download section.

No luck for subbuteo in Connecticut - The bad weather had terrible consequences on last sunday's Connecticut Open to be organizd in Wallingford. Many players were unable to travel and therefore the number of entries dropped from 9 to 3. Andrea Gasparini won the trophy but unfortunately the tournament will nout get the WASPA status due to the low turnout (less than 4 players).

A Belgian in Singapore - Stéphane Lambert (SC Flanders) will be the first Belgian to travel to Singapore for table football in March. The guy from Antwerp will be playing the FISTF Satellite over there and will hopefully be able to play some WASPA games during his stay in Asia.

Big success for the Subbuteo relaunch in London - This tuesday was a great day for the beautiful game of Subbuteo as the spanish company Netcam officially presented the new version of the game. Former international football player John Barnes was there to present the new material that will be available in the shops in the UK in March. Hopefully many other nations will be able to find distributors in the next few months. The relaunch of subbuteo matches with the European Football championship to be played next summer in Poland and Ukraine. Youc an read an article from the Sun at http://www.thesun.co.uk/sol/homepage/news/4083286/Subbuteo-news-Footie-ace-John-Barnes-launches-game-comeback.html and some pictures of the presentation at http://www.flickr.com/photos/tomgrovesphoto/6755242867/

FISTF world cup cancelled or relocated? - The FISTF Board has decided to cancel the FISTF World Cup to be played on July 21 & 22 in Athens, Greece. The Board explained the economical crisis in Greece doesn't guarantee the tournament could take place in good conditions. Hopefully an alternative solution will be found in the next few days so that the world cup will take place in another country. Having no world cup this year would be a total disaster for the game and for those who are working with young players in order to be ready for the most important competition of the season.

Top 10 nations this week on the blog - This week the bigger number of visitors came from the UK, the US, Italy, Germany, Ireland, Singapore, Canada, Greece, Belgium and Cyprus.

Have a great week-end and keep on flicking,
Vincent
Publié par Vincentcop à l'adresse 11:14 No comments:

Rudy Norita has just announced that the WASPA tournament in Singapore has been moved from March 4 to March 25.
Publié par Vincentcop à l'adresse 09:02 No comments:

News from Malta - Two weeks ago, the tournament played in Attard had to be stopped due to the illness of organizer Joe Debono. The semi-finals and finals of the event will take place on January 24. Daniele Spadaro, Hector Scerri, Simon Gauci and Gordon Caruana are the remaining competitors and hopefully there will be many good games over there. Good luck to all of them.

News from the US - The second US tournament under WASPA banner is taking place this sunday in Connecticut. About 10 plaers will be competing including ASA President Massimo Conturso and Andrea Gasparini, winer of the Yokohama tournament (in Japan) in September. Good luck to all competitors.

News from Canada - This week we had good contacts with Steve Whitehead, organizer of the Eastern Ontario Subbuteo club based in Trenton. Steve said there is some interest to hold a tournament soon. The exact date and location should be announced shortly.

News from Australia - Ron Shipp (ronshippau@yahoo.com.au) is trying to set up a tournament in Adelaide, SA. Interested players should drop him a line.

Top 10 nations this week on the blog - This week the bigger number of visitors came from the UK, the US, Germany, Italy, France, Belgium, Finland, Australia, Canada, Malta.

Congratulations to the Netcam company for creating the "Subbuteo Official Site" on Facebook. The Subbuteo Official Site announces the game will official be relaunched in March and the official presentation of the new subbuteo products will be made in London on January 24. English football legend John Barnes will be present to support the relaunch of the beautiful game!
Publié par Vincentcop à l'adresse 15:49 No comments:

Quiet period - First of all, sorry for the delay. the newsletter is out a bit later than expected due to too much things to do at work. There is also a very calm period but hopefully there will be more great news soon.

A tournament in Connecticut - The Connecticut Open is going to have a strong field and Massimo Conturso was happy to announced the tournament could reach the double digit. Jim Taylor will be back in action after more than one year of the circuit and there will be players coming from Massachussets and New york. Good luck to everyone!

Sad news from Malta - Last week's tournament in Malta has been stopped due to Josep Debono's illness. Joe had to go to the hospital and we wish him a quick recovery. The last games of the tournament will be played shortly.

Top 10 nations this week on the blog - This week the bigger number of visitors came from Russia, italy, Spain, the US, Germany, Malta, Belgium, Singapore, Finland and Greece.

Have a great week-end and keep on flicking,
Vincent
Publié par Vincentcop à l'adresse 17:35 No comments:

Happy new year - 2011 wa a great year for WASPA but hopefully 2012 will be even better. We hope to have a growing circuit and we would be very happy to reach the number of 25 tournaments over the next 12 months. We wish all players a great year full of good surprises, renewed enthusiasm for the game and more importantly a good health!

A tournament in Connecticut - The Connecticut Open to be played on January 22 will be a WASPA tournament. There will be a good turnout and the local club will be meeting players from different States of the East Coast. Looks like it will be a great tournament!

Attard SC in great shape - Joseph Debono has announced that Attard SC Will be holding two more WASPA events in January and February. The event played on February 10th (Saint-Paul Day is a public holiday in Malta) will hopefully attract many players from different maltese clubs.

General States of Table Football - FISTF has announced that the meeting about the "General States of Table Football" scheduled in Paris this week-end has been postponed to March 17 & 18 due to the poor attendance of the representatives of the different national associations. We at WASPA are very curious to see what will happen during this meeting as several important decisions might be taken by FISTF.

Top 10 nations this week on the blog - This week the bigger number of visitors came from Spain, Malta, Germany, Italy, the UK, Greece, the US, Finland, Belgium and France.

Have a great week-end and keep on flicking,
Vincent
Publié par Vincentcop à l'adresse 11:06 No comments:

On the picture, Mr Stefan Cordina, Major of H'Attard (with the medal arround his neck), during a visit to H`Attard by the President of Malta Dr Goerge Abela seen with his hands on one of the football players of the nursery of H`Attard. (info provided by Joe Debono) 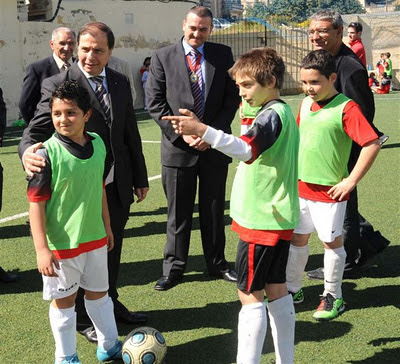