The second half of the month was a calm period but no totally inactive as we received results from Australia, Belgium and Italy.

Our friends at Sydney TFC had a small tournament this month with five players taking part. Local organizer Fabrizio Coco took the honors after defeating Eliot Kennedy (Northern Falcons TFC) by a single goal (1-0) in the final. Tony Credentino was 3rd, Paolo Credentino 4th and Kostas Barbaris 5th.
In Perth, six players met for the monthly tournament of the "Subbuteo Perth" club. Alan Kimber won four of his five games to claim the victory while Mick DeVincentis was runner up. At the end of the league format, the final standings were as follows:

Six players also met in Brisbane where experience made the difference in the final when Giuseppe Tardiota defeated Gus Gillespie on shots after a great game (2-2). Kevin Halliday and Gareth Whalley were the semi-finalists while Wayne Miller and Robert Seychell were also taking part. 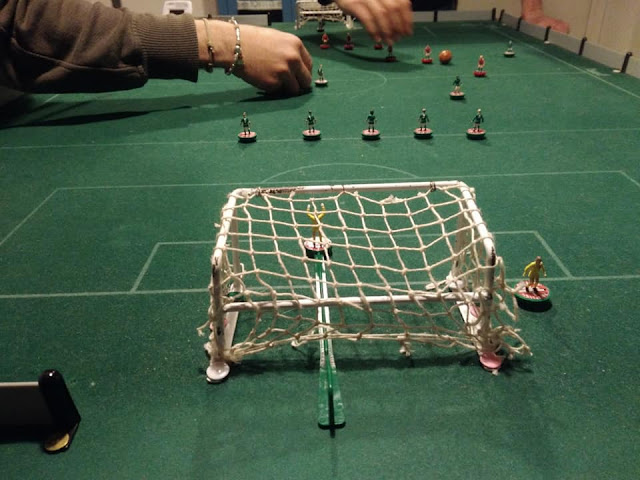 In Italy, the Ternana players met again on April 25 and Marco Perotti won another title in the end of the tournament played with the old rules. 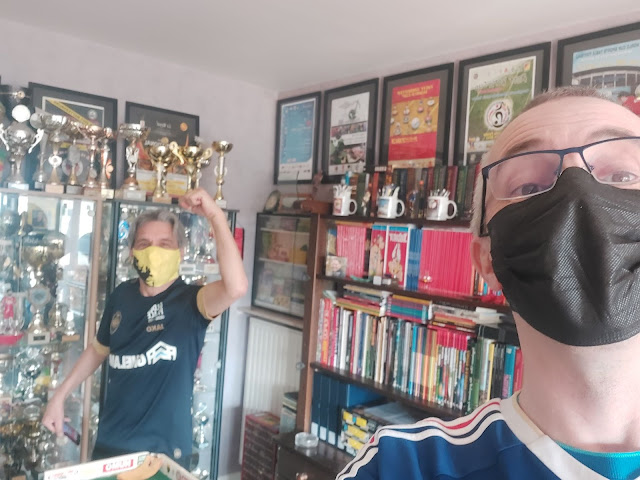 Finally, in Belgium, another "lockdown test match" was played in Antwerp between Jos Ceulemans (SC Flanders) and Stéphane Lambert (OSC Yokohama). After a draw in the first game, Jos won the other two matches to win the test-match. Congratulations.

Don't hesitate to send your WASPA results by e-mail to vincentcoppenolle@gmail.com

The updated WASPA rankings and statistics should be available in the next few days!

April 19: results of the week

Despite the restrictions in many areas, we continue to receive results from different countries. Here is a quick summary of results collected from Italy, England and Belgium.

Italy: Terni is the most active club in the world nowadays

We continue to receive results from Terni where the Perotti family is holding more and more gatherings under WASPA banner. The last few tournament saw victories for Emanuele (1), Simone (2) and Marco (1) in always close games. The club of "SC Terni 2014" has already held 11 tournaments with the old rules (and as a reminder, a club can hold a maximum of 12 tournaments with old rules per season). Thanks to the Perotti family for the huge support, considering the last tournament (held on April 17) was a way to celebrate the 10th birthday of the WASPA circuit. More tournaments should be played in Terni in the future and will count for the new Italian WASPA ranking run by Gianpaolo Abagnale.

In England, the Wolverhampton players are eager to play again and Justin Scott sent us results of a small tournament with just three players. Players met each other twice and Justin Scott finished on top with 7 points while Richard Badger had 5 and Mick Hammonds was third with 4 points. Hopefully the Wolverhampton club will be allowed to hold a real tournament in their premises soon.

Test-matches in Italy and Belgium

WASPA lockdown test-matches continue to be played and we have been glad to receive results from Italy and Belgium. In Teramo, the young Nicolò Bonomo defeated his father Massimiliano in a three games session. It's fantastic to see a young boy (8 years old) making a great debut in the WASPA circuit.

In Belgium, Geoffrey Marain (AS Hennuyer), former number 1 in the circuit, played 2 different opponents in the last few days. On Sunday, Marain defeated Vincent Coppenolle (Templeuve United) in a 3 games session and didn't even let his opponent score a goal.
On Sunday, Geoffrey's guest was Richard Boulanger (USC Huy). Marain won the four games played but it was great to see Richard travelling by train for two hours to meet his old rival.

We will be back in the next few days with more results from Australia as our friends down under had tournaments in Sydney, Perth and Brisbane in the last few days.

Even if the virus is still there, there are tournaments or Subbuteo games played under WASPA banner in different countries.

Here is a quick summary of recent event held in Australia, Italy and Norway. 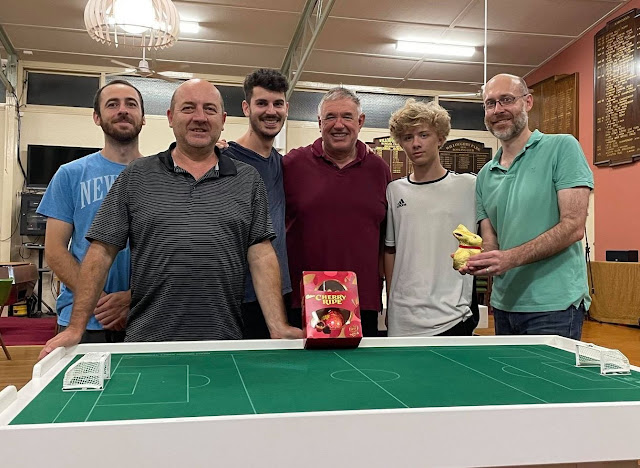 Steve Dettre reports: "Congratulations to Fabrizio on taking the Northern Falcons Easter Cup, and to Adrian G for making his second consecutive WASPA final, before losing to Fab 2-0.

Group 1 ended up being a true 'Group of Death' with Fab, Steve and Eliot. Steve took the lead against Eliot before being pegged back before the break, as they battled a 1-1 draw. Then Steve battled hard against Fab, surviving three shots that hit the post before registering only their third 0-0 draw since first meeting in 2015. Fab then decided the group with a late winner against Eliot.

In Group 2, Adrian continued his great form after resuming play, holding Tony Credentino 0-0, while Torben accounted for Paolo Credentino 2-0 in his first competitive match in a year. Adrian then beat Paolo, while Tony registered his second 0-0 of the night against Torben. Tony had a chance to progress, but was held 0-0 (again) by his son, while Adrian wrapped up the group beating Torben 1-0. 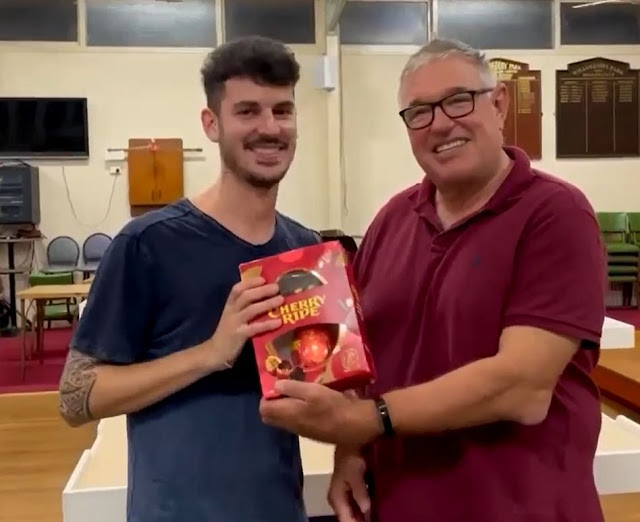 In the semis, Fab overran Torben 3-0, while Steve and Adrian battled to a 1-1 draw aet, with the tie decided 4-3 on shots after a marathon 13-shot effort.

Many thanks to all who came and the fabulous staff at Willoughby Park Bowling Club who continue to host us."

Some of you probably ignore there is a new club in Perth, Australia. The "Sports Table Football Club of Western Australia" organized a first WASPA tournament last week-end with a small field of four players but many interesting games.

The winner was Mick DeVincentis who finished on top of the group after winning two of his three games. Arjuna Hanafi (Melbourne TFC) was runner-up while host Hugh Best was third and Chris Thorn was fourth with one victory. 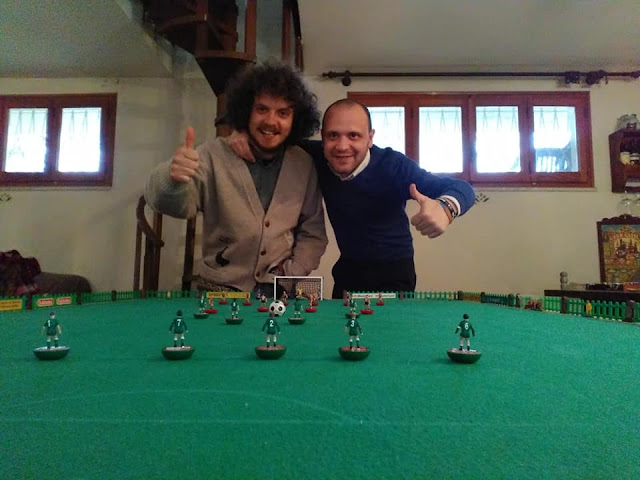 We also received results from Norway where a "WASPA lockdown testmatch" was played in Oslo on April 5, 2021. The results were as follows:

If you are kind to play games under WASPA banner, don't hesitate to send your results to vincentcoppenolle@gmail.com
The doors are always open for new players so feel welcome!

The Pelicans are back 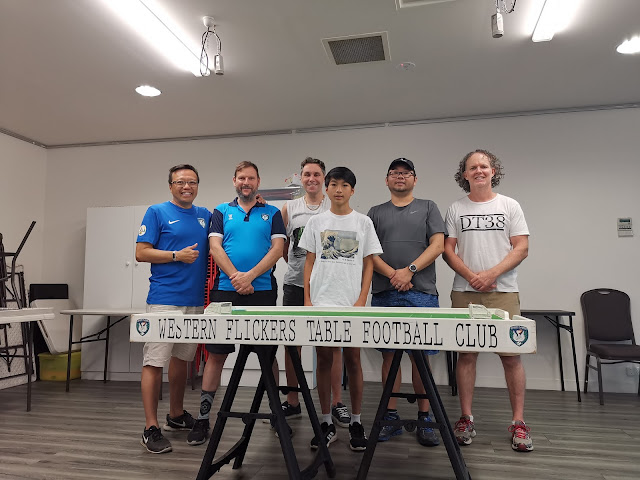 After more than a year since their last WASPA in February 2020, it was great for the Western Flickers to be able to host their 43rd edition on a Good Friday holiday.

The round robin competition took place at the club's new base venue - the Louis Joel Arts and Community Centre. Just a stones throw away from the Altona town village and its scenic beach, the centre is a fantastic venue with all the modern amenities and then some. Local players are definitely looking forward to hosting more WASPA / FISTF events here soon!

6 Pelicans took part in WFW43 and it was great to be flicking again. Everyone was naturally a bit rusty in the beginning, but before long it was just like we were never away. Cracking goals were being scored and the oohs and aahs of near misses mixed with laughter from friendly banter. It felt so good to be back!

Eventual winner was Benny who pipped Adrian Connolly in the last round after being neck and neck all day. Special credit to young Josh Tey who showed excellent progress in his game - definitely one to watch for the future!