Darren Bezzina is number 1 - The new rankings have been published (you can take a look on the "Golden book" available in the download section) and Darren Bezzina (right on the picture) remains the number 1 in the WASPA ranking. The player of the italian club SPQR Roma won last friday's tournament in Attard (Malta). He also became the first player to win 2 tournaments since the creation of the WASPA circuit. Well done. 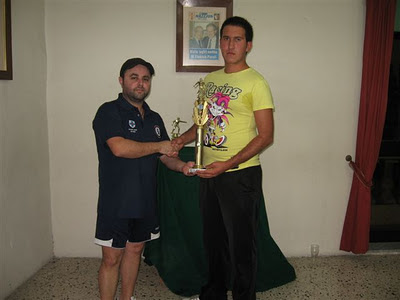 More projects in Malta - After the last tournament in Malta, local organizer Joe Debono confirmed Attard Subbuteo Club will host another tournament in the next few weeks. Details will be announced soon.

Results of the survey - It seems like there is no enthusiasm to try to play with different rules. Therefore the project to play a tournament using the rule fo the direct free kick will not come to reality.

Good luck - The WASPA community wishes good luck to all the plaers who will be travelling to Slovenia this week-end to play the FISTF Europa Cups. European Cups remain some of the most exciting events in the world and it's always an honor to be part of the show.

Top 10 nations this week on the blog - This week the bigger number of visitors were from Malta, Finland, Belgium, Italy, the US, the UK, Greece, Canada, Spain and Germany.

The updated golden book is available in the download section. Darren Bezzina has increased his lead on top of the ranking. He becomes also the first player to win two WASPA tournaments. Malta is still on top of the ranking of nations. Enjoy the reading.
Publié par Vincentcop à l'adresse 09:13 No comments:

Another great win for Darren Bezzina

The fourth tournament organized by Attard Subbuteo Club took place last friday and 16 players were competing. The tournament was not the most surprising one as the WASPA number 1 players, Darren Bezzina (SPQR Roma) came on top of his group and later qualified for the final. In the semi-final, he beat Daniele Spadaro (Attard SC) who is the number 2 in the ranking. Bezzina won the fainal against Nicholas Sciberras (3-2) and improves his lead in the ranking. 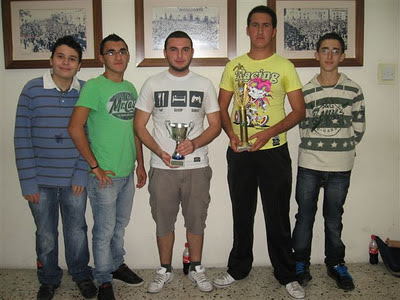 The finalists and some of the young talents taking part 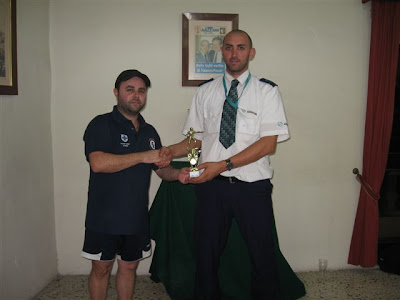 Hello everyone, here are the news of the week. There isn't much to say this week but hopefully there will be more soon!

News from El Palomar de Barcelona - The spanish club from Barcelona is now clearly promoting the WASPA circuit. The club run by Flavio Watzka will host their first WASPA tournament on November 27. Check more info at the club's blog: http://tablesoccerbarcelonapalomar.blogspot.com/

Top 10 nations this week on the blog - This week the bigger number of visitors were from Spain, Finland, Singapore, Belgium, the US, France, Greece, Germany, Italy, Portugal.

Updated results file - The results of the Stockholm tournament have been updated in the "golden book" that you can find in the download section.

Contacts in Cyprus - Stefanos Kouratzis is happy to announce that the club of Nicosia is thinking about organizing a tournament. More details will be announced soon.

Top 10 nations this week on the blog - This week the bigger number of visitors were from Spain, Sweden, the US, Finland, Belgium, Italy, Greece, the UK, France and Germany. We also ad some visitors from the United Arab emirates, Hong Kong and Russia :-)

A french winner in Stockholm

Second tournament in Stockholm is over! David Cremoux (France) won the final against Robert Green (Australia) with 2-0. Massimiliano Ria (Italy) took the third place when he beat Lars Löfgren (Sweden) with 1-0 in the bronze game. Ari Kainu from Kiruna took a nice 5th place. More info and stats will come later. Thanks to O´Learys and all the participants!
Publié par Vincentcop à l'adresse 14:13 No comments:

A tournament in Cyprus?

Stefanos Kouratzis has been in touch this week-end to say there was some interest from the club of Nicosia to organize a WASPA tournament soon. The club of Nicosia has a small group of players but they are trying to keep the game alive on the island so hopefully there will be further developments in the near future.
Publié par Vincentcop à l'adresse 09:44 1 comment:

A promising tournament in Sweden - There will be a good field of players this saturday in Stockholm for the second tournament organized by Lars Löfgren. 16 players are currently registered but even if a few of them don't show up, it will be an interesting tournament. This time there will be less "top men" from abroad but David Cremoux (France), finalist of the first Stockholm tournament, will try to confirm his job of favorite player.

Results of the survey - 20 people answered to the questions "What should be the main priority of WASPA?" and 9 people (45%) said "Have more tournaments in more countries?", 6 (30%) said "Make sure it becomes a registered non-profit organisation ASAP". Other answers were "Have tournaments with different age categories" (5%), "Have a better website" (5%) and "Have a better rulebook" (10%). 1 person had no opinion. Right now our priority will therefore to try to have more tournaments in more countries but we need to find ways to convince people to host tournaments. Despite we have very positive contacts in the US, Canada, Greece, Argentina and Australia, we struggle to find people ready to organize events. Tournaments in Malta, Sweden, South Africa and Singapore have been very successful while events in the US, Japan and Belgium had a poor turnout but a great feedback from the players. It seems like some nations like France and Italy are a bit scared to organize WASPA tournaments because the national associations just want to give a priority to national events. Spain will be our next guest. We struggle to find contacts in Germany, Portugal, Switzerland, the Netherlands, Denmark, Finland and the UK despite some players from these nations told us they support the WASPA movement. So if you have ideas to develop the WASPA circuit, feel free to contact me at vincent.cop@rsca.com or post messages on the WASPA section of the international table football forum at http://tablefootball.friendhood.net/

Top 10 nations this week on the blog - This week the bigger number of visitors were from Spain & the US (both as number 1), Finland, Germany, Russia, Belgium, Sweden, Greece, Australia, Italy.