Clifford Graaff has contacted us to say he will be organizing the first WASPA tournament in South Africa. The exact date and the locationw ill be announced soon. For more details about the game in South Africa, feel free to check the following website: http://premiersubbuteoleague.leaguerepublic.com/
Publié par Vincentcop à l'adresse 08:57 No comments:

Hello, here are some updates about what's going on in the WASPA circuit and int he international subbuteo scene.

Stockholm tournament update - There are now 9 confirmed players (from 7 different nationalities) for the Stockholm tournament and 21 "possible entries", which includes Denmark's Rasmus Lund. The event will definately be one of the most exciting ones this season.

Another tournament in Australia? - Brett Davies (wolfden@bigpond.net.au) is trying to organize something in October at the MOAB, one of the largest Wargaming events in the country. Interested players can drop a line to Brett so that he can arrange the location and the exact date.

Subbuteo back in the stores - One of the breaking news at the FISTF world cup in Italy was the announcement made by the spanish company Netcam, owner of Total Soccer, confirming "they have purchased Hasbro's subbuteo trademark rights for the next 10 years with an option for the next 10 years. They also purchased the right to manage everything concerning the material and they will produce do two samples for all, mold bases and the original Astropitch. The relaunch os Subbuteo will start next June at the European Football Championships in all countries of Western Europe and even in some of Eastern European nations." The bad news about this change is that Netcam intends to regulate the use of the name Subbuteo, which means everyone wanting to use the world subbuteo (in a subbuteo club, association, an Internet forum,...) will have to ask Netcam's permission. And that's not great....

Small nations at the FISTF World Cup - The FISTF world cup took place lastw eek-end in Palermon, Sicily (South of Italy). It was one of the smallest world cup ever with only 121 players (including 18 U12 players) from only 12 nations. 5 countries managed to have a strong team (Italy), Belgium, Malta, Austria and Spain) while Wales had 5 players, Germany and England had 4 players. The last 4 nations had only one player. Andrea Gasparini was the US representative and didn't panage to pass the first round int he Open category. Margot Diradourian, a young U12 girl, was one of the surprises of the U12 section. Some people comparred her to the Delphine Dieudonné, the legend of the ladies section, of 20 years ago (!) while Wendy Wang Yang, a chinese girl who is Austria's Worlfgang Haas's wife, was plying in the ladies section (with a swiss jersey as she's living in Switzerland). But the big surprise of the week-end was the peformance of Swiitzerland's Trisha Baumeler. The young girl of the Zurich club reached the final of the Ladies tournament. She lost to Giuditta Lo Cascio but she can be very proud of her performance. Well done.

Top 10 nations this week on the blog - This week the bigger number of visitors were from Italy (53), Australia, the United Kingdom, Greece, the USA, Germany, Finland and Greece, Belgium, and South Africa

Hello, nothing much to say this week as most people are concentrating on the the forthcoming FISTF World Cup to be held in Palermo, Sicily. Despite the tournament will be one of the smallest world cup ever due to the very poor number of players and countries taking part, we wish everyone a lot of fun for the week-end. We also hope that, in the future, the FISTF will listen to the needs of the players and chose beter locations and, more importantly, a beter date for the World Cup. There mere many voices concerned about the fact the WC is held in July, which makes things more difficult for everyone to travel. Instead of waiting how things are advancing, the Board has confirmed the next world cup will be held in July 2012 in Greece. And surprisingly, the Greeks have just announced they will not attend the world cup this week-end...

Malta - As you could read earlier this week, Simon Gauci won the first WASPA tournament in Malta and became number 1 in the new rankings. Congratulations Simon! We also expect Malta to organize another tournament in september. The exact date and locationw ill be announced soon.

England - A tournament mught be held in Kent on August 27 as Miguel Pereira is organizing the "Subbuteo Summer School" to try to attract more new players in the summer. More details will be revealed soon.

Surveys - Looks like the big majority of visitors of the blog like the WASPA project. 63% of visitors said they will attend WASPA events in the future.

Rankings - From what the survey on the blog revealed, most people think it's important to have rankings even if many of them think it's not a priority. Therefore the WASPA rankings will be edited every month and published in the "Golden boo" (see download section).

Top 10 nations this week on the blog - This week the bigger number of visitors were from Italy (100), Malta, Germany, the United Kingdom, Singapore, Greece, Belgium, the USA, Spain and France.

Simon Gauci is the new number 1

The finals of the "Summer Cup" organized by Attard Subbuteo Club finally took place on monday. The tournament had been stopped last thursday after the group stage due to the heat and the presence of the Mayor of Attard. Therefore, the semi-finals took place this week and both Daniele Spadaro and simon Gauci qualified for the final after beating Hector Scerri and Timothy Spiteri. Both games ended on 2-1. In the final, Simon Gauci won on a short 1-0. this was enough to claim the title and the become the number 1 player of the WASPA ranking.

The results file and the updated ranking are available in the "golden book" that you can find in the download section of the blog. 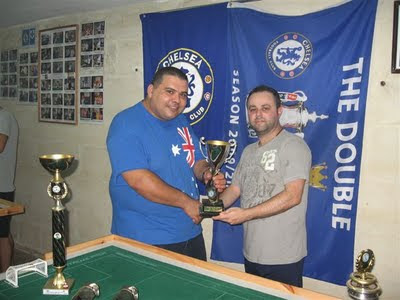 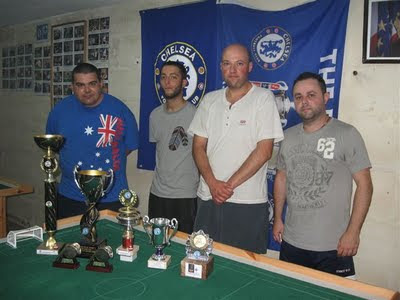 Here is a picture of Michele Lanzarotto's vist at the Leste' Aquila SC in Singapore. These are the players who played with Michele from club "OSC UfoRobot" of Verona, Italy. Players who played the friendly are from left to right: Rudy, John Ho, Kok Wee, Michele and Ezan. 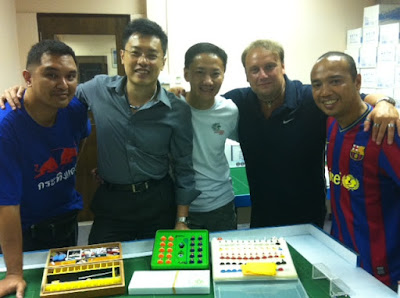 Hi there, here we go for some short news about table football and WASPA.

News from Malta - the tournament held by the club of Attard was played on thursday. At least the group stage was played by 13competitors but the tournament was stopped when the Mayor of Attard showed up and all players had a drink together with him. The semi-finals and the final will be played shortly.

News from Singapore - The club of Leste Aquila decided to move the date of their tournament to August 21. There will also be a ladies tournaments and a friendly team match between the local club and the team of Elias SC. Team matches are not yet very popular in Singapore but with the increasing number of clubs in the country, there will be more team matches for sure in the future! Also, the local club was happy to meet an italian player, Michele Lanzarotto, earlier this week and several friendlies were played. Local players are

News from the US - Congratulations to Daniel Cranston for winning the national title last week-end. daniel was not only playing, he was also the organizer of the National. Well done. Congratulations also to Paul Eyes for winning the veterans title and to the club of Maryland for being the team champion. Read more: http://americansubbuteo.proboards.com/index.cgi?action=recent#ixzz1RiU30UdM

Forthcoming events - Here is a list of the forthcoming WASPA tournaments. We hope many more will be added in the near future.
- August 21 - Tournament hosted by Leste' Aquila SC (Singapore)
- August 21 - Tournament in Stockholm (Sweden)
We wait for the exact date of the tournament in Australia (planned for January 2012) and we have had interest from South Africa, Denmark, Germany, England and the US. Who will come next?

Top 10 nations this week on the blog - This week the bigger number of visitors were from Germany (34), Singapore, Belgium, Greece, Finland, Italy, the USA, Canada, the United Kingdom and Malta. We were also happy to see visitors from Indonesia, Switzerland and Ireland ;-)

New date for the Singapore tournament

The tournament scheduled on August 14 in Singapore (and hosted by the club of Leste' Aquila) will finally take place on August 21.
Publié par Vincentcop à l'adresse 19:47 No comments:

Hi there, there isn't much to say this week but the news are rather exciting.

First of all, there are some good news from Malta as Attard Subbuteo Club will be hosting their first tournament next week. 13 players are registered and will be dropped in four groups. The club also announced another tournament might be organized in august.

Australia - There are discussion with Ron Shipp (ronshippau@yahoo.com.au) to organize a tournament in january during Cancon in January 2012. Cancon is Australia's biggest games convention. Ron is trying to organize the Australian championship as well but this still needs to be discussed. There are also plans to host a tournament in Sydney later this year.

Sweden - There are now 8 confirmed entries for the tournament. Francesco La Torre from Italy is also likely to take part. There are plans to prepare the future of the game in Sweden as hopefully this tournament will be the first of many more to come.

Singapore - The Leste' Aquila SC is also thinking to host a second tournament later this year as there is already enough demand from local players. More details coming soon.

United States - Massimo Conturso announced the Subbuteo Club Connecticut will celebrate next month the 10th year of activity with an ASA Open to be played in Salem, MA (1st choice location) or CT. Also, a second ASA Open (not approved yet) could be played in CT on Sunday, August 28th as part of the WASPA circuit. Details for both events will follow shortly!

Top 10 nations this week on the blog - This week the bigger number of visitors were from Finland (35), Germany, Singapore, Italy, Malta, Greece, Belgium, Portugal, the United Kingdom and France.

A tournament in Australia?

There are big chances a tournament will be held at Cancon in January 2012, this is Australia's biggest games convention and there are hopes it will be the Australian Championship as well. Contact Ron Shipp at ronshippau@yahoo.com.au for more details.
Publié par Vincentcop à l'adresse 10:40 No comments: