On July 21, six players met in Gouda to play the second WASPA tournament held in the Netherlands this season. Stéphane Lambert travelled from belgium to meet five dutch players. The group stage had a number of surprises as Henk Landzaat could not pass the first round. In the final, Cansey Van os defeated Rinaldo Van Dijk (3-0) to claim the trophy while Stéphane Lambert defeated Fabrizio Cavazza in the sudden death to claim the third place. Thanks to Xavier and his friends for organising a tournament under
WASPA banner.
Publié par Vincentcop à l'adresse 22:21 No comments: 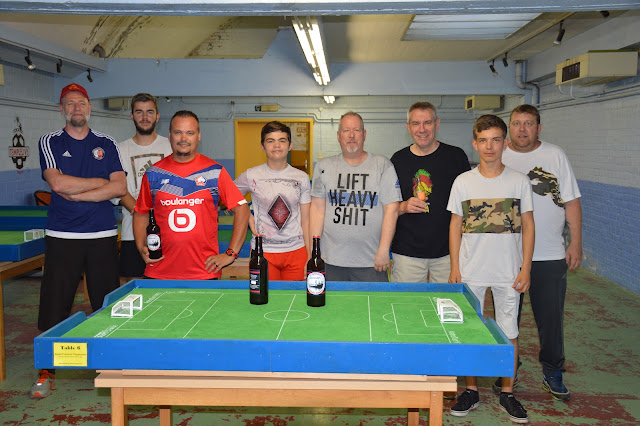 On July 20, the day before National day, the Templeuve United club held a 3rd WASPA tournament counting for the 2020-2021 season. 10 players from Belgium were competing with a special format of tournament to satisfy the aimes of the differen competitors. There were old faces coming like Geert Leys paying a visit to Templeuve and Eddy Beernaert who was back to the game after a long break and there were two new players attending a tournamen for the very first time. The Swiss system was played in four sessions but after 3 sessions, the winner was already decided as Geoffrey Marain was the only player to have 7 points. Considering he had to play his last game against his son benjamin, it was decided that Geoffrey would not play the last session so that the other 8 players still present could all play another game. That decision was good for Benjamin Marain who managed to beat Didier Moons and to finish the night with 9 points to finish runner-up. Vincent Coppenolle was 3rd and undefeated (8 points) while Geert Leys was 4th (7 points). More importantly all players had a great evening and were glad to meet again.

On July 20, 6 flickers played a Festive Hari Raya WASPA under Lions SC. A round robin format was adopted & the winner of the event was Michael Choong with full points with runner-up Bernard Lim.

Sorry for the big post but there are news from several countries in Europe and it will be easier to compile results we received from Northern Ireland, Belgium, Malta and Norway. 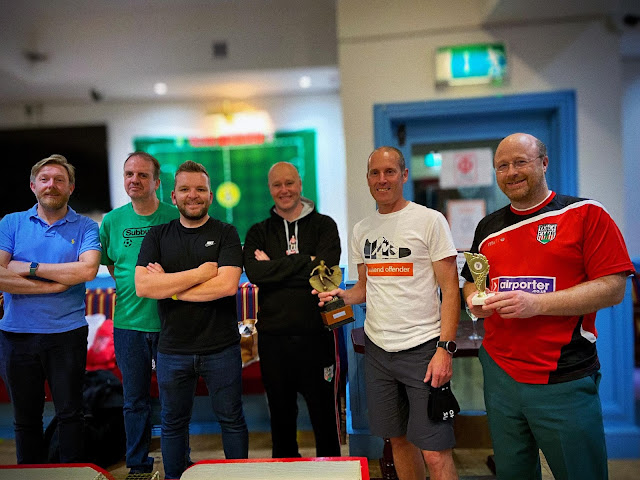 DCTFC are also thrilled to announce the 2021 ‘Derry Open’ will be held on August 14 (from 11 am to 6 pm). Registration is essential if you want to play. Check the club's Facebook page for details at https://www.facebook.com/DerryCityTableFootball

Draw will be made on the Friday 13th night.

Belgium: Second tournament of the season in Templeuve 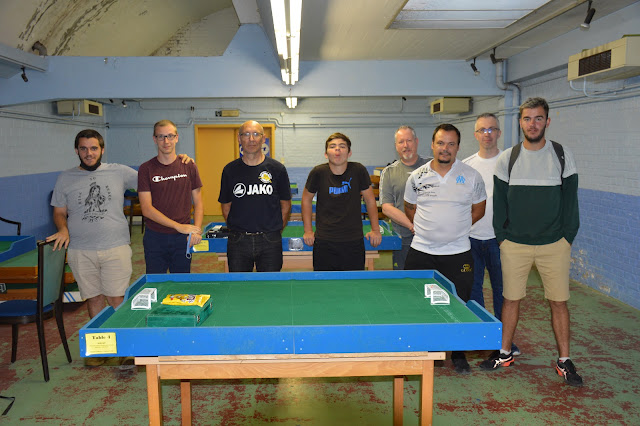 After the regional tournament and promotional event held in June, the Templeuve United club was back in action last Friday with 9 players competing in Swiss format. Sensation happened in the second session when Matthias Averlant managed to defeat Geoffrey Marain. Everything could still happen before the last game but the draw between Averlant and Vincent Coppenolle gave the win to the local organizer who won the tournament on goal-difference. Templeuve will hold another tournament on Tuesday, July 20 at 6.30 pm to celebrate the National Day! Details by e-mail at vincentcoppenolle@gmail.com 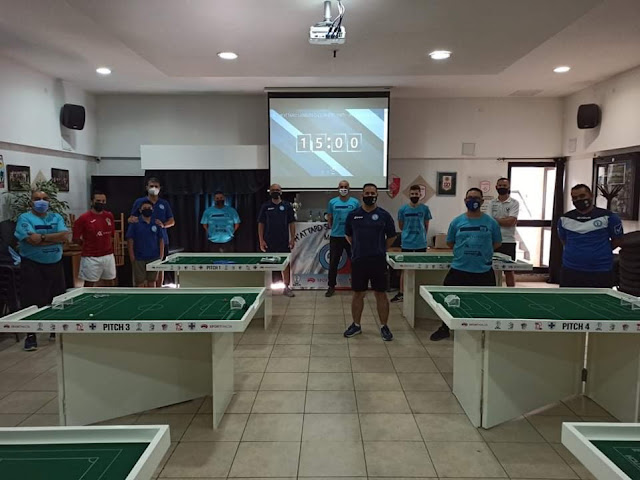 The club of Attard was back in action in the WASPA circuit with a great tournament attracying 12 players including a few famous names.
For his very first WASPA appearance, Samuel Bartolo (Valletta SC took the honors after defeating Bormla's George Ebejer (4-1) in the final. Semi-finalists were John Zammit (Bormla Subbuteo Club) and Jean Carl Tabone (Barcellona Mortellito). Huge thanks to the Attard club for supporting the WASPA circuit!

We are happy to see the Oslo playing continueing to play. We received results of a "WASPA lockdown testmatch" in Oslo, Norway on July 11, 2021. The results were as follows:

As both players are vaccinated, this time they appear without wearing the mask. :-)

Rudy still on top in Singapore 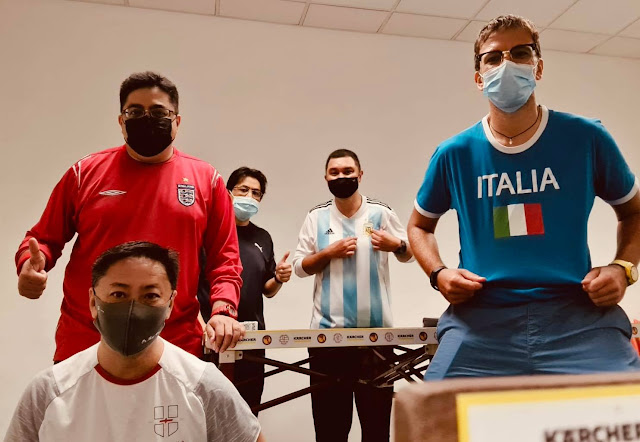 A very international tournament in Baden-Baden

After a long break, germany is also back in action and last week-end Milan Knezevic organized a WASPA tournament in Baden-Baden. Due to some restrictions the tournament was only open to six players but Milan had no pain to get six players together.

The tournament format was fantastic: a league system with home and away games som that every player had 10  between 11.00 am and 6.30 pm.

It was a very international tournament with Eric Lienhardt (France) taking the honors after being unbeaten, Milan Knezevic (Serbia) being runner-up and later in the table Peter Erb (Switzerland), Panagiotis Krommydas (Germany), Renato Parussini (Italy) and Maurizio Zironi (Italy) also taking part. there was a wonderful group from around Europe but more importantly there was a great fair spirit between competitors.

"Eric was the winner but the most important thing is that we met after a long time to spend time with our passion", commented organizer Milan Knezevic.
Publié par Vincentcop à l'adresse 20:11 No comments: 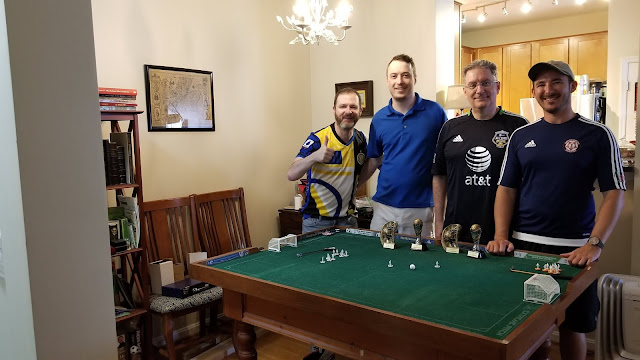 Four players of the American mid-Atlantic region met to contest the inaugural PlayHard-ist Times Trophy. Daniel Cranston, Benny Nuger, Andrew Zunino, and Bryan Arnold participated in this tournament, which took place on July 10th in Alexandria, Virginia. After two rounds amongst all four players, the final was a contest between Daniel Cranston and Benny Nuger. Daniel won the championship trophy in an exciting match, 2-1.
Publié par Vincentcop à l'adresse 21:17 No comments:

Dear Subbuteo fans, hope all is well. We are pleased to send you the updated records of the WASPA circuit after a busy month of June. Things are slowly back to normal and we had 26 tournaments added in the records last month.

We had results from South Africa, England, Wales, the USA, Belgium, the Netherlands, Northern Ireland, Singapore, Australia, Greece and Malta and it seems like more nations will be playing again soon under WASPA banner.
You will find in the enclosed files the updates results and rankings.

- Flicks for Kicks at http://shop.flickforkicks.com/

June 2021: results from around the world

Here is a brief look at results of events held in different countries in June.

Despite some problems related to the virus, some Australian clubs have been able to play some events under WASPA banner in June.

Perth was definately the most active region with three tournaments played in just 3 weeks. To celebrate the visit of FISTF president Steve Dettre, the Sports TFC of Western Australia held a tournament with 8 players taking part. Tan Yew Loy managed to beat Steve Dettre (3-2) in the final while semi-finalists where Brian Pearson and local organizer Hugh Best.

The same club later organized a smaller event with 4 players taking part. Mick DeVincentis won his three games to finish on top of the group table while Hugh Best was runner-up. 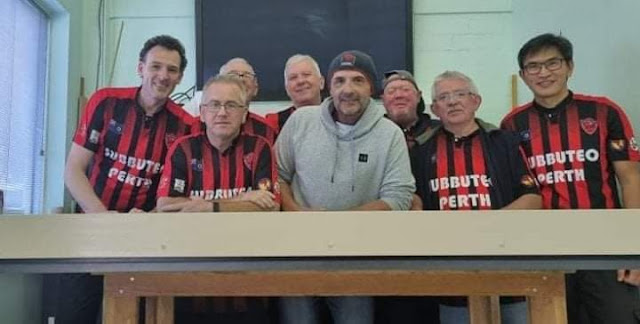 The other club in the city, "Subbuteo Perth", also organized a tournament in June. There was a great turnout of 8 players and Tan Yew Loy won his second tournament of the month after defeating Ross McNulty on shots in the final. Alan Kimber beat Noel Mani in the game for the third place and Mick DeVincentis won the consolation tournament. 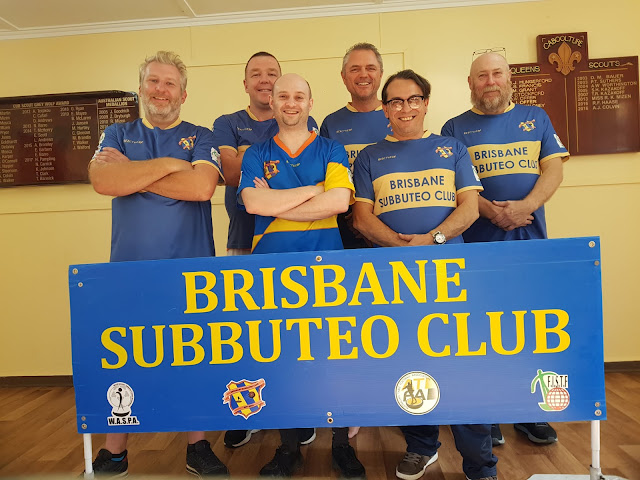 In Brisbane, six players attended the monthly event and there was no surprise as Giuseppe Tardiota won another final, defeating Gus Gillespie this time (1-0). Kevin Halliday won the game for the third place against Gareth Whalley.

Greece: Nikos Monos does it again

The Lions Zante had another tournament on June 10 with 8 players taking part. Congratulations to Nikos Monos for claiming another title. Nikos defeated Kostas Argiris in the final (2-1). 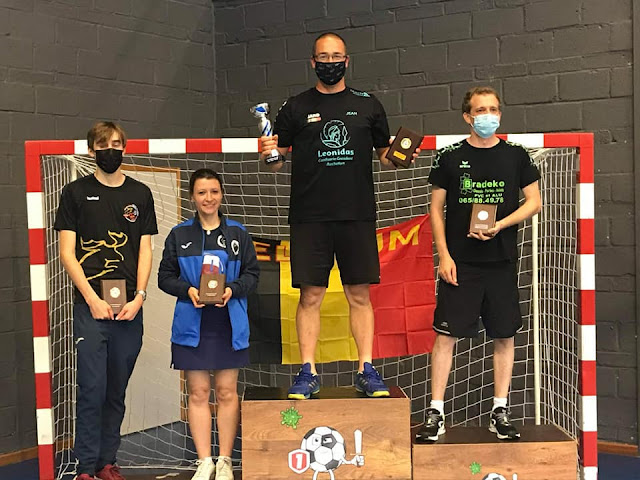 There was a tournament on June 27 in Theux, in the East of Belgium. The tournament had a fantastic turnout of 44 and 16 players were invivted to play a WASPA knock-out tournament in the afternoon. Jean-Grosdent (Wamme SC) defeated benoit Lagean (AS Hennuyer) while Stéphane Garnier from France (Tiburones) and Noé Scheen (Stembert) made it to the semi-finals. Thanks to organizers Sébastien Scheen and William Van den Houte for mking thing happen.

The Templeuve club had a small promotional tournament on June 25. Matthias Averlant won the tournament on goal-difference as both Matthias and Michaël Dupret finished the evening with the same number of points. French player Sébastien Sorge was third while Anthony Meireaux took the 4th place.

Templeuve will hold another regional tournament on Friday, July 9.

The Netherlands: Gouda is back in business

As several other countries, the Netherlands are slowly getting back to normal and three players met for a msall event in Gouda last week. Xavier Aret took the honors to claim the trophy while Fabicio Cavazza was runner-up and Rinaldo Van Dijk took the third place.

Another club in Malta, Attard SC, will organize a WASPA tournament on July 11.