2011 back in the mirror - 2011 has been a good year for WASPA, not only because it was the first year of the new association. We had 15 tournaments organized by 9 different clubs from 8 different countries and 135 players from 14 countries (from the 5 continents) took part in the tournaments. There were small events with 4 players but also larger tournaments with up to 30 players. The beginning has been very positive. It will be important to continue to work and to increase the number of tournaments in 2012. Hopefully more nations, clubs and players will join in the next few months.

News from Attard SC - the club of Attard recently organized their Christmas cup. Daniele Spadaro Spadaro won the final on shots against Hector Scerri.W ell done to both players.

Top 10 nations this week on the blog - This week the bigger number of visitors came from Spain, Germany, Singapore, Italy, Portugal, the UK, Malta, Sweden, Belgium and Finland.

Have a great week-end and keep on flicking,
Vincent
Publié par Vincentcop à l'adresse 10:01 No comments:

Merry Christmas - Just a quick note to wish everyone a great christmas period. Family and friends should have a special attention at this time of the year and we hope all WASPA players and friends will have a great Christmas. 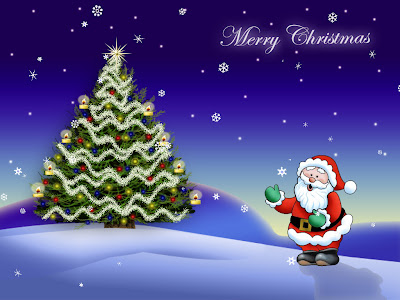 Updated results file and rankings - The "Golden book" is updated int he download section. Results from Attard and Singapore are included as well as the new rankings. 143 players are now involved. Darren Bezzina is still the number 1 in the individual table.

Templeuve tournament - It's Christmas period and it's a calm period for subbuteo players. The templeuve United club (Belgium) had a national tournament last saturday counting for the belgian circuit. 29 players took part, which is a poor turnout comparred to previous similar events. There were some good players taking part though and David Leroy (Rochefort TS) took the title after beating Alain Jadot (SC Charleroi) in the final. other winners were Stelio Tsangouris (Open B), Joffray Laurent (Open C), Jody Henrioul (U19), Kenny De Schuyteneer (U15), Corentin Bouchez (U12) and Olivier Dubois (veterans). 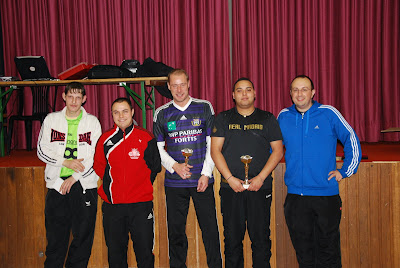 Top 10 nations this week on the blog - This week the bigger number of visitors came from Spain, Germany, Malta, Singapore, the UK, France, Sweden, Belgium, Canada and Italy.

Have a great week-end and keep on flicking,
Vincent
Publié par Vincentcop à l'adresse 13:17 No comments:

Rudy Norita won the Eastern Elias tournament on sunday. Rudy had to wait the end of the shootout to beat John Ho. Joel Long and Tan Kok Wee lost int he semis while the young Faruq won the junior event. Well done to all the competitors. 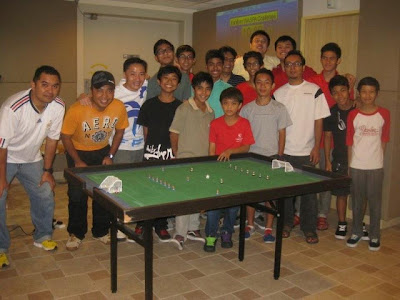 Some more pictures of the Attard tournament - On the attached pictures, you can see the young Nicolai Cini with his father Michael along with the Minister of Health Dr. Joseph R.Cassar during the presentation of the trophies. Congratulations also to the young players of the San Andrea School who took part to their first tournament. 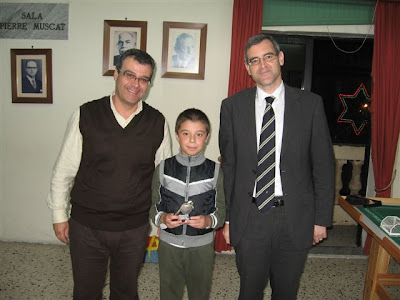 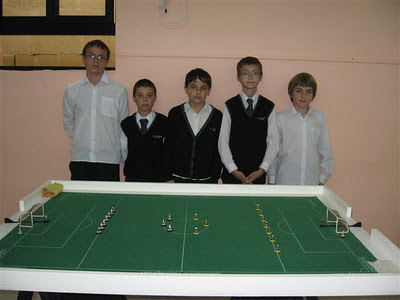 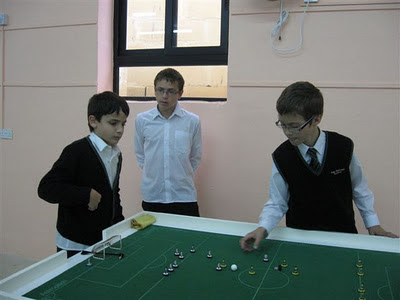 A world number 1 - The Attard tournament was very special because the winner of the event, Joseph Mifsud, is the current world number 1 int he FISTF ranking of the veterans. Congratulations to Joseph for his victory and a huge THANK YOU for taking part in a WASPA tournament.

Go ahead Singapore - The Eastern Elias club will host a tournament in Singapore next sunday. It's a last minute addition to our calendar but it's more than welcome. Well done to the Singapore guys for this great idea.

Top 10 nations this week on the blog - This week the bigger number of visitors came from Spain, Malta, Greece, Germany, Belgium, the US, Singapore, Sweden, Russia, the UK.

Some pictures of the Attard tournament

Here are some pictures of the Attard tournament played last friday. 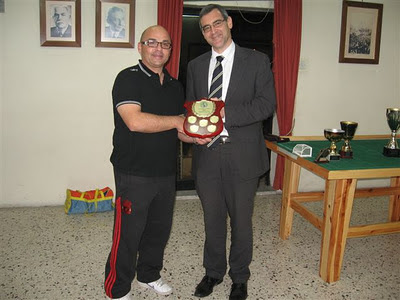 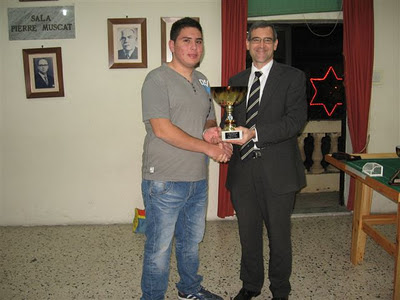 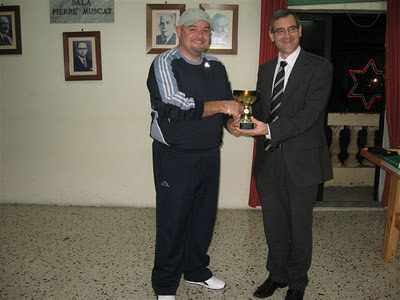 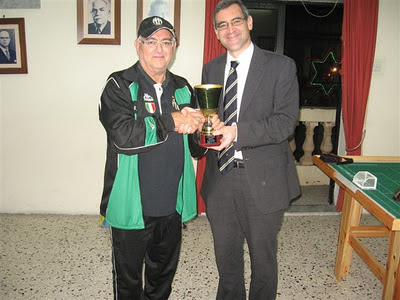 Another tournament in Singapore

Here is a last minute for a tournament to be played in Singapore on December 18. The Eastern Elias SC will be hosting a second tournament next sunday. Good luck to all players involved.
Publié par Vincentcop à l'adresse 09:37 No comments: 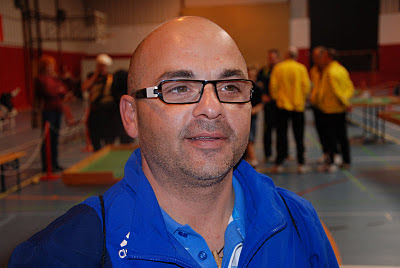 Congratulations to Joseph Mifsud (picture) for winning the 5th WASPA tournament in Malta. He beat Angelo Borg in the final. It's a huge honor to have such a great player as Joseph Mifsud taking part and winning a WASPA tournament. 16 players were taking part! Well done to those who made this possible!
Publié par Vincentcop à l'adresse 22:23 No comments: 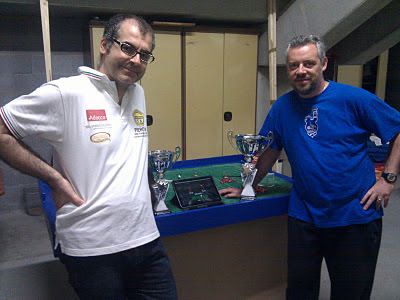 WASPA players in FISTF events - Several WASPA players took part in different FISTF tournamrents over the last few days. In the Grand Grix of Germany in Berlin, Marcus Tilgner (who won the first Stockholm tournament) was the organizer. Despite he didn't do well in the team event, he had the satisfaction to host a nice tournament with 68 players from 12 different countries! Saverio Bari from italy won the Open final.

In the Open of Msida (Malta), Angelo Borg (winner of the 3rd Attard tournament) won the U19 category. The finalist was Darren Bezzina (number 1 in the WASPA ranking). The club of Attard took the 4th place in the team event. Samuel Bartolo beat Massimo Cremona in the Open final.

In the Singapore Satellite, Hong Kong's Antonio Carabillo (finalist of the Yokohama tournament) lost in the semi-final. John Ho beat Mohd Ezan in the final.

Go 20000 - This week the blog passed the interesting number of 10.000 vists. Thanks to all visitors for contributiing to this success story!

Top 10 nations this week on the blog - This week the bigger number of visitors came from Spain, Germany, the US, Italy, Malta, Russia, Greece, Singapore, Australia and Finland.

Have a great week-end and keep on flicking,
Vincent
Publié par Vincentcop à l'adresse 10:02 No comments:

Hello, here is another newsletter

30 players in Barcelona - The very first tournament in Spain was more than successful as 30 players were taking part last sunday. They were dropped into six groups of five players and the winner of each group qualified for the play-offs round. In the final, Luis Benito won the title on shots against Flavio Watzka. Competitors were coming from three different clubs (Palomar FT, Lleons de Girona SC & Subbuteo La Selva) while 19 players were not member of any club. This was therefore a great day for the table football community and for WASPA in particular.

Big moves in the new rankings - After the Barcelona tournament, there are now 118 players in the ranking. Darren Bezzina is still leading the table with 70,50 points while Daniele Spadaro is second and Nicholas Sciberras is third. Luis Benito is the most improved player this month as the newcomer from Spain is already 4th is the ranking. Spain is also coming second in the ranking of nations while Malta remains the leader.

Top 10 nations this week on the blog - This week the bigger number of visitors were from Spain, Malta, Germany, Belgium, Italy, France, Finland, Greece, Cyprus, the US.

Have a great week-end and keep on flicking,
Vincent
Publié par Vincentcop à l'adresse 09:47 No comments: