Pictures of the 1st WASPA tournament in California

Next tournament on June 13 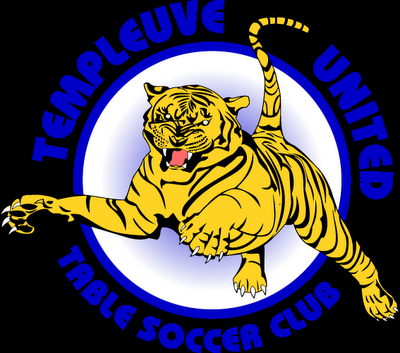 The 2nd WASPA tournament will be held in Templeuve (Belgium) on monday, June 13, which is a day off for most workers in the country. Registrations are open till the day of the tournament and information can be asked by e-mail at the address Vincent.cop@rsca.com

The tournament will take place in the templeuve sports center and will start at 10.00. Entries are possible till 9.30 and the draw will be made at 9.45. The tournament will count as "regional" and there are good hopes to attract a good number of players from the Tournai area.
Publié par Vincentcop à l'adresse 10:48 No comments:

You can now download the results file with all season results and statistics. The very first WASPA tournament took place last sunday in California and we hope many more events will be held in the near future. The file will be updated as often as possible.

Please note there are some slight changes in the Handbook. The new file is also int he download section.

We have a possible tournament to be held in Belgium in June and we have had messages from the US, Australia, Malta and... Italy (!) asking for details on how to organize tournaments.
Publié par Vincentcop à l'adresse 12:52 No comments:

The very first WASPA tournament took place last sunday in Simi Valley, California. If the turnout was low, the spirit was great as the four competitors agreed it was a great day. Wayne Smith came on top of the groupe stage to qualify for the final while Kevin Nieman beat Simon Hutchinson (1-0) in the barrage round. In the final, Wayne Smith gave no chance to Kevin Nieman and won the title. "This was a really fun tournament because everything that happened was a WASPA first. Great times were had by all. Everyone had some first. Dominic the first WASPA goal, Simon had the first WASPA win. Kevin had the first five goal WASPA match, and I won the first WASPA tournament", commented Smith.
Simon Hutchinson beat Dominic Hutchinson to win the "Lois Lane final".
Link and pictures: http://socalsubbuteo.com/competitions/waspa1.php 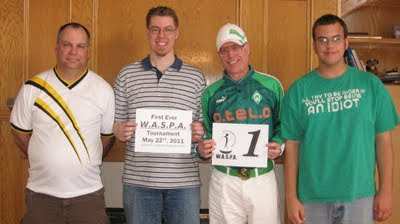 The WASPA project should not be a source of conflict

After reading comments from several people on the Subbuteo News forum, there are bad feeling from a part of the table community about the goal of WAPSA. In no way, WASPA will be against FISTF. Both WASPA and FISTF are different and have different goals. WASPA was created because there was a feeling from many players that FISTF was forgetting the small nations and the weaker players. Also, the lack of communication from FISTF has been a disaster for the game as many players thought FISTF was dead (!) or just taking care of the top players. Right now there is no perfect system and we are all aware that there is no way to find a perfect issue. FISTF has some priorities and WASPA has different priorities. Let me remind you that WASPA is still a project and not an official association yet. Even if there is interest from several nations (Japan and Malta are joining the WASPA project), WASPA will only be a reality when enough clubs and players will be ready to host tournaments. This might take time but that's how it goes when we start from scratch. Anyway, the very first WASPA tournament next sunday in California should be a source of inspiration for players around the world.

Whatever happens, please keep in mind that both FISTF and WASPA, despite they are not working with the same resources and the same ambitions, are there to promote table football and to get as many players involved as possible.

It was great to discover all the feedback received over the week-end. Players from Australia, Hong Kong and the US (Ohio) are thinking about hosting tournaments in the near future and there were also positive reactions from Canada and Singapore. Most european national associations, clubs and players haven't been contacted yet but it looks like there is a lot of interest for WASPA. Thanks everyone for your support!
Publié par Vincentcop à l'adresse 12:35 1 comment:

Thanks to Allan Thornton, we have a great logo that will be the image of the association. There will be a colored version of the logo so ideas of the best colors to fit the logo are more than welcome. Once again, special thanks to Allan. 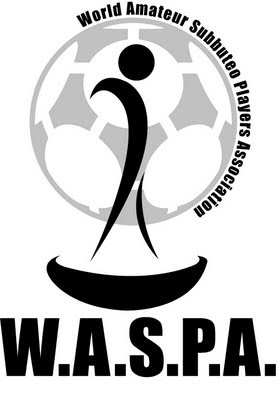 There are good news coming up since a couple of days. The first version of the Handbook has been released. Of course many improvements need to be added but it's a good start.

There are also news coming up from Malta and the US. In Malta, some clubs are willing to host WASPA tournaments and support the WASPA movement. In the US, a tournament under WASPA banner could take place in the next few weeks.

There might be several other tournaments in different countries (possibly Belgium, Denmark, Australia, Singapore) in the next few months, which is a good start.

WASPA is still under construction and there is no Board yet. Hopefully there will be more feedback from those who are interested to join and organize the movement soon.
Publié par Vincentcop à l'adresse 09:36 No comments: