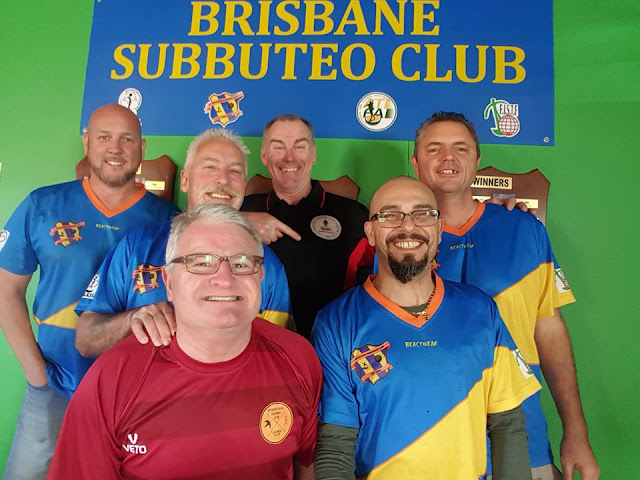 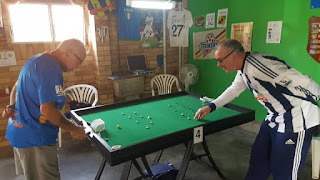 In addition we hosted two gusts. Hugh Best from Subbuteo Perth (really a true Queenslander!) and 10yo Finlay McNamara undertaking his first ever Subbuteo experience.
Hugh was great company and we were all honoured he came to share the day with us. Thanks mate!
James Gillespie provided Finlay with some games to demonstrate how to play. Thank you James. Finlay says he will come back next tournament day!
Tournament organiser, Giuseppe (Pino) Tardiotta chose a round robin with the six players, semi finals to follow and then final.
Round one involved Rik against Pino. Rik took the lead but Pino equalised before half time. That score remained until full time. Shane played Gus. There have been some close games between the two and this game was the same. Gus took the lead and Shane got back in the game, scoring before the break. After half time, the game was back and forth before Gus again took the lead. From the kick off Shane came up with an equaliser, 2-2. 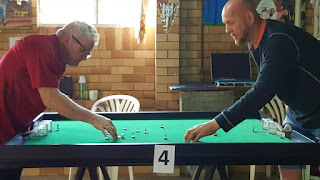 Andrew R. (Andy) played Hugh in the other game. Andrew used a Subbuteo heavyweight team for the tournament. He quickly took the game to our visitor and got to 3-0 before half time. The second half was better for Hugh but the match finished 4-0.
Round two Shane played Rik in an open style game. Rik created plenty of opportunities but somehow failed to score. Meanwhile, Shane created a couple of opportunities as well but this game had 0-0 written all over it! And that is how it finished.
Hugh was up against Pino in this round. He and Pino went to half time at 0-1. Pino killed the game off in the second half with a second..2-0.
Gus came up against Andy. Always a good game between these two guys. Gus led 1-0 at the break but Andrew R. came back into it to draw the game 1-1. 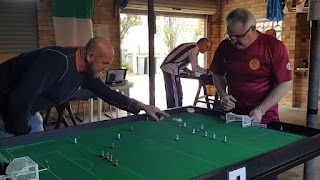 Round three and Rik played Hugh. Again Hugh fought valiantly but two goals before half time and another after saw the game go to Rik 3-0. Andy proved too strong for Shane in their game 1-0 at half time, Andrew R. scored two more in the second half, 3-0.
Pino played Gus to finish off the round. After scoring in the first half, Pino pushed for more goals and ended the game winning 3-0.
Round four saw Andy play Rik. This was a tight game and in the end, a second half goal to Rik was the difference. Gus met Hugh and after a scoreless first, Gus Scored three in the second half to win.
Shane played Pino in the other match. Pino was 3-0 up by half time and made it 4-0 in the second half. Shane scored a late consolation goal for a final score of 4-1 to Pino. 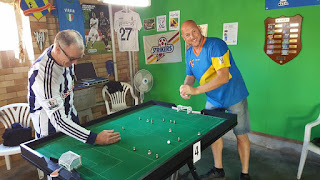 Round five, the last saw a couple of very close games. Rik versus Gus, second and third place potentially on the line. Gus scored first before Rik equalised before half time. In the second half Gus scored again but couldn't get enough goals to pinch second. Gus 2-1 over Rik.
Pino met Andy in a game that potentially could see Andy go second. This was a tight game and before half time, Pino scored, 1-0 and that was how it ended. Hugh played Shane in the other game. With nothing to play for they played out a 0-0 result.
The semi finals saw Pino play Andy in another good game. It was 1-0 to Pino at half time. Try as he might Andy just couldn't get on top and Pino eventually won 3-1. Rik played Gus in the other semi, a tight game and 0-0 at half time. Rik scored in the second half and it stayed 1-0. 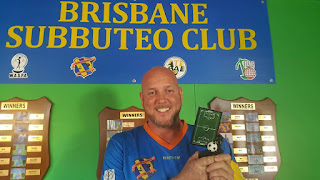 The final matched Pino against Rik and this game was a close contest. 0-0 at half time, neither player was able to score before extra time was required. In the end, Rik won 2-1.
Another great day, thank you everyone who attended, special mention Hugh Best.
The next tournament will be held on 20th August at the Woody Point clubhouse. Flick off 9.00am
Publié par Vincentcop à l'adresse 22:15