Great atmosphere plus superb venue, our club was blessed to have played in the Jurong Central Subbuteo Club 7th monthly league tournament at Kallang Wave in-conjunction to *Singapore Football Week*.
16 players of various age were pooled into 4 groups to battled it out with the finalist playing to a grand audience in the final with the game being live telecast at the venue big screen. The top 2 players from each group were to advance to the Cup Quarter Finals with 3rd & 4th placed group players were drawn into the consolation rounds. 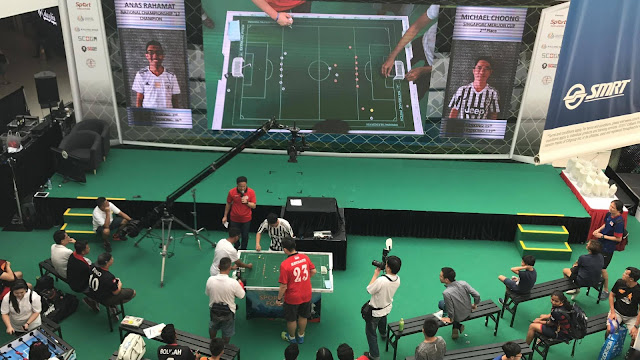 The seeded players all managed to qualify the Quarter Finals however the recent Singapore Asian Cup team Captain, Bernard Lim & Jurong Club Captain, Rudy with the latter having flicking issues after his flicking nail broke 😢 in the 1st group game, lost their games to Michael & Nic. While Rizal Taib narrowly lost an entertaining 3-4 game against Anas while our new groom Noor Haikal was still in his honeymoon zone, losing to Fauzi. 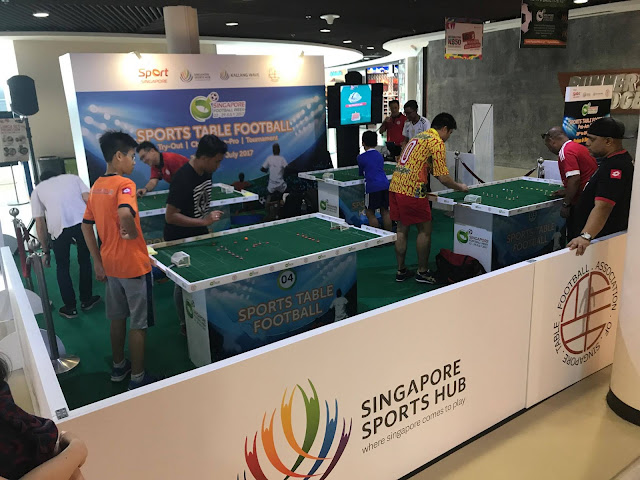 Cup Semis
Anas edged out Nic while Michael won on sudden death shoot out against Nic hence the epic final between Italian 'Catenaccio' defence of Michael against the ruthless German attack of Anas.

Finals
The final which was refereed by Bernard Lim was surprising open.  Michael striking the 1st blow but Anas came back strong & capitalised on Michael defending lapses.  Final score was Anas 4 - Michael 1.

Thank you to *Sports SG* & Table Football Association of Singapore (TFAS) for the opportunity for us to participate in this eventful event.