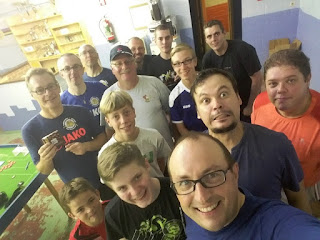 The great weather and the holidays didn't stop Subbuteo players to attend the latest Templeuve United tournament and there was a good turnout of 14 for the evening on July 18. Among the players there was a newcomer and two guys coming back after a long hiatus of over ten years. Michaël Dupret was the man on fire as he won his four games, including the big fight of the evening against Geoffrey Marain, to claim his fourth WASPA title. Dupret, who currently plays for the small club of Tournai, was a surprising but deserved winner. Congratulations to all the players for the fair spirit during the evening.