The first tournament at the new clubhouse proved to be a very good day for all attending. New tables and plenty of space, well organised and great fun.
The same 5 players from the previous tournament contested this one, with some different results.
The initial round of games had the much improved Gus Gillespie leading the league table, setting up a semi final with Rik Bland. Gus proved too good, and took the victory 2-0.
The other semi final between Giuseppe Tardiota and Andrew Bennett was a goal fest, with Andrew defeating the 3 time champion 4-2.
Rik finally beat Giuseppe after losing the previous 3 tournaments in the final, but on this occasion it was for 3rd place. 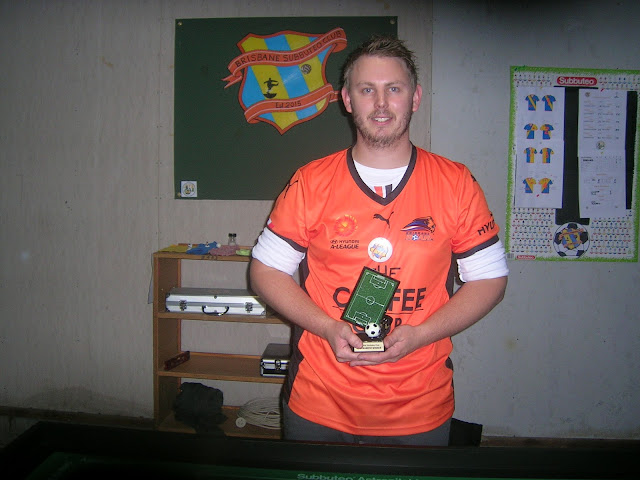 The final between Gus and Andrew was tight, and went into extra time. Gus drew first blood, and was within seconds of a fantastic victory, but Andrew showed his quality with a very late strike, sending this final to a shootout. Still level after 5 shots, they headed to sudden death, and eventually Andrew got the decisive goal, and with it the trophy!
Publié par Vincentcop à l'adresse 13:54