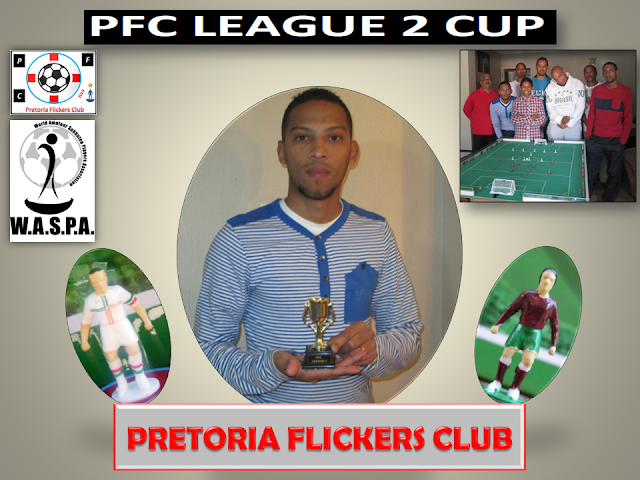 Saturday 13 June 2015, Pretoria, South Africa:
A day of great Subbuteo action in Pretoria as the event delivered a total of 37 goals over the 28 matches played, with only 8 matches ending without goals!
Kegan vd Merwe, playing in his beloved customised Portugal home and away kits, hit the ground running with a 2-1 win over Chessray Jooste in Match 1.
Throughout the event Kegan found himself in the top 2 positions and it was in Match 14 : Sherwin Reed (0) v (2) Bevin Reed, when Bevin went top of the
standings to threaten Kegan's hold on the top - this was largely due to a shock in Match 10 : Rowin Wilson (1) v (1) Kegan vd Merwe, where Kegan had to
fight back and earn the equaliser in the last minute of play after staring certain defeat in the eye to newcomer Rowin Wilson!
The match of the day came in Match 17 : Kegan vd Merwe (1) v (1) Jayden vd Merwe - after Kegan took the lead with a well chipped shot from just within the 18y area he adopted a very defensive approach which afforded Jayden the freedom to attack and Jayden equalised from an angled shot from wide in the
shooting area. The match was very tightly contested thereafter with both players going for accurate long range shooting, but neither could break the deadlock and alter the scoreline - a fair result for the day's most entertaining match! Jayden was making his way up the standings after a bad start - losing 1-0 to Julian vd Merwe in Match 2, and then a 0-0 draw with Rowin Wilson in Match 5.
When Jayden beat Bevin by 1-0 in Match 20 he suddenly found himself in 2nd position and challenging Kegan for the honours on the day!
Match 24 : Kegan (1) v (0) Bevin brought and end to Bevin's chances of challenging for the title as Bevin was looking to follow up on his success during the PFC League 1 Cup held in April 2015 !
Kegan secured 1st place in Match 25 : Kegan (1) v (0) Julian with a well deserved victory - a result which also ensured an unbeaten run on the day for Kegan. Well done to Kegan for capturing his second WASPA title for 2015, and his third WASPA title overall! In Match 27 : Rowin (0) v (0) Julian, a win for Julian would have secured 3rd place on the day - but Rowin showed good defensive play to deny Julian the win and at the same time earn himself a total of 7 points on the day!
Finally, a special mention must go to newcomers Rowin Wilson and Justin Thumbran - as these two players celebrated scoring their first ever goals in a
Subbuteo event ! Well done guys - hope that it is the start of many more to follow!
This was by far the most exciting event on the PFC calendar to date - let us get some more......please! 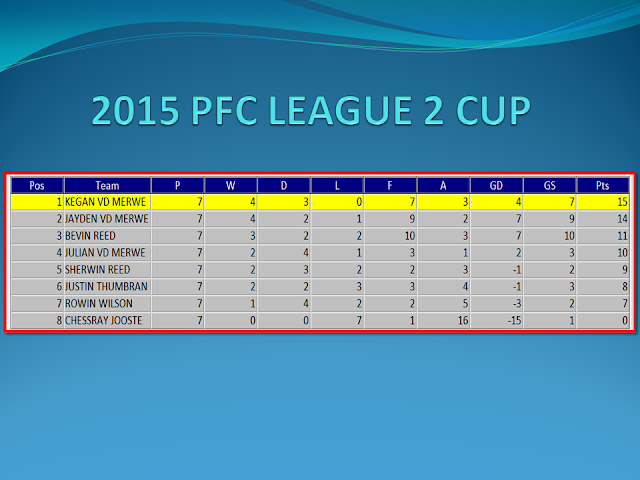