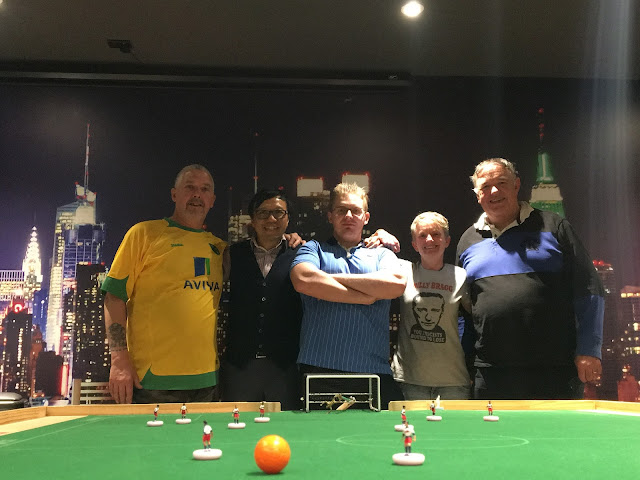 It was a simple round robin tournament with close matches all round. Beth and Kevin showed continued improvement again, keeping their match scores very respectable indeed. Beth in particular showed great dedication turning up even though she was ill. And she still managed to get a solid win over Kevin to score bragging right. Consistent with WASPA rankings though, it turned out to be a 3 way tussle for the title between Steve, Luke and Benny.
Nothing split Steve and Benny in the opening tie which was a tight 1-1 draw. Luke just managed to pip Steve (who was visibly tired after a flight from Sydney) by a single goal. This meant that Benny had to beat Luke in order to win the tournament; something he has not been able to achieve for over a year!
It was an exciting game as usual, but Benny managed to score a couple of quick attack goals to take a commanding lead. Luke never gave up and fought hard to get an unlikely comeback. But Benny managed to hold off the onslaught to get a rare win over arch-rival president Luke and secure the title. 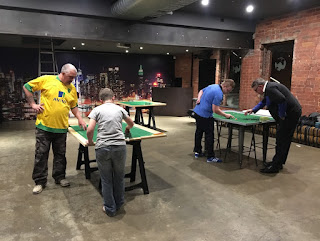 Most importantly, it was a fun night by all with delicious snacks & drinks in a cool venue. Another successful WTF gathering and a great lead-up to the Australian Open. Special thanks to the Zagame’s Caulfield venue and Masita Sportswear (the AO sponsors who was also in attendance).

It was fun but now it’s time for the Western Flickers to return to Melbourne’s beautiful West.
Veni, Vidi, Vici.
GO WEST !!

P.S. If anyone is interested in taking part in future Western Flickers events or just popping by for chat and look-see, please visit the Western Flickers Facebook page (https://www.facebook.com/WesternFlickers/) or send an email to bennidokk@yahoo.com
Publié par Vincentcop à l'adresse 14:32