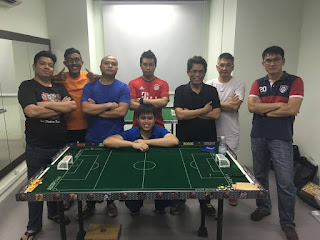 The Jurong Central Subbuteo Club had its monthly WASPA once again on 17th September. Nine players who participated in the tournament were drawn into 3 groups of 3. The top players from each group would proceed to another round robin in the Cup group. The 2nd from each group would proceed to the Plates group, and the remaining players would proceed to the Bowl group. Anas topped the Cup group with tight games, and edging out on goal difference. The winners of the Plate and Bowl are Nic and Fauzi Respectively.
Publié par Vincentcop à l'adresse 11:26