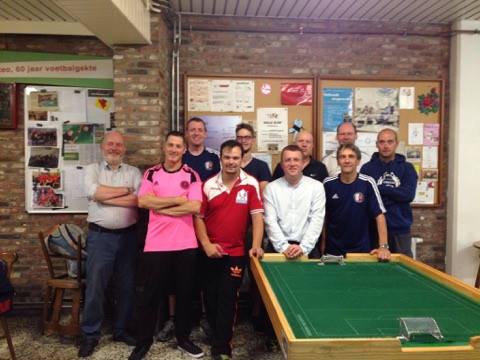 This monday the club of SC Flanders was starting their new season with the first WASPA event, the first of a circuit of 10. The club has a WASPA tournament every first monday of the month and for the first event, 10 players were showing up including geoffrey marain and Vincent Guyaux who travelled from the South of the country. In the end of the eventing, Vincent Guyaux (Bormla SC) took the honors, ending with 10 points in four games but more goals scored than Frank Lannoy (SC Temploux). Jos Ceulemans (London & Essex United) was third with 9 points while Goffrey Marain and David Wouters ended with 6 points. In the scond half of the table, the young Robin Somers ended with 5 points while Bart Van de Vliet had 4, Johan Lourdon 3, Geert Leys 2 and Willy De Bandt 1.
Publié par Vincentcop à l'adresse 13:11