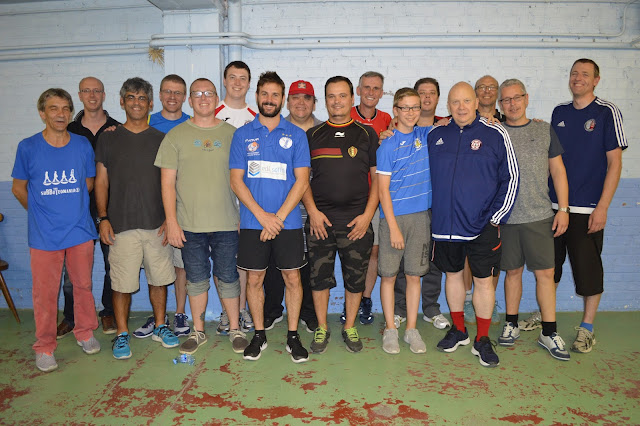 Just before the world cup, the US National team was visiting the premises of the Templeuve United club to practice and play a WASPA tournament. Besides the 8 Americans, 2 French players and 7 Belgians were playing in Swiss system. In the end of the evening, there was no hesitation to calculate the winner as Christian Filippella was the only one to win four games. He defeated Vincent Coppenolle, Geoffrey Marain, Rémi Soret and Michaël Dupret to claim the honors. Dan Cranston from Maryland Subbuteo Club was runner-up of the tournament with 10 points. The final standings of the evening were as follows:
1. Christian Filippella
2. Daniel Cranston
3. Geoffrey Marain
4. Michaël Dupret
5. Jos Ceulemans
6. Mike Tillman
7. Dario Passadore
8. Rémi Soret
9. Patrick Sheridan
10. Alain Flament
11. Paul O'Donovan Rossa
12. Gregg Deinhart
13. Geert Leys
14. Paul Eyes
15ea Matthias Averlant
15ea Vincent Coppenolle
17. Eric Caillaux
Publié par Vincentcop à l'adresse 13:50