2 in a row for Chessray Jooste 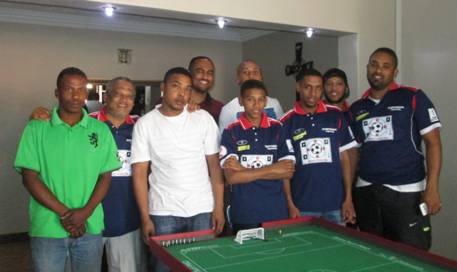 (report by Julian vd Merwe)
Saturday 10 September 2016, Pretoria, South Africa
The first ever September event in Pretoria attracted a field of 9 entries - included in the field was debutant Antonio Abdeziet. The event was played under the theme "MATCHDAY LIVE" as we played out actual scheduled fixtures from the BPL on the day. Round 1 saw the Manchester Derby ending Stonton Nortjie (Man Utd) 0 v 0 Conway Julie (Man City). Elsewhere Rowin Wilson (Watford) beat Antonio Abdeziet (West Ham) by 1-0. The other matches in Round 1 produced two thrillers which ended Kegan vd Merwe (Stoke) 1 v 1 Jayden vd Merwe (Spurs) and Bevin Reed (Liverpool) 1 v 1 Julian vd Merwe (Leicester). By the end of Round 2 matches, Chessray Jooste (Swansea) was top of the standings whilst Rowin Wilson (West Ham) beat Stanton Nortjie (Man Utd) by 1-0 to go 2nd only by way of goal difference !!! Rowin certainly looked confident in his opening 2 rounds of play & was raising some eyebrows with his play on the day.
Round 3 action saw Bevin Reed (Liverpool) beat Rowin Wilson by 1-0, with Rowin playing well all game and conceding with only 19 seconds left to play - much to Bevin's relief. That result keeping Bevin's title chances alive. Elsewhere, Julian vd Merwe (Leicester City) took the lead over Kegan vd Merwe (Stoke City) but Kegan done well to come back and win by 2-1 and also keep himself in the hunt for honours! Round 4 matches produced some massive results - firstly, there was a loud cheer as debutant Antonio Abdeziet (West Ham) scored to beat Conway Julie (Man City) by 1-0!
I think the cheer was mostly from the Man Utd fans - who had witnessed, in real time, how Man City had just beat Man Utd by 2-1 at Old Trafford !!??
Kegan vd Merwe (Stoke City) then beat Rowin Wilson (Watford) by 1-0 to go top of the standings on 6 points. Jayden vd Merwe (Spurs) then dispatched of Julian vd Merwe (Leicester) by 1-0 to go 2nd on the standings with 6 points too!
The final match on the day, Chessray Jooste (Swansea) v Bevin Reed (Liverpool) was a true decider. A draw would imply that we had 4 players ending on 6 points, forcing the event into a 4 way play off, as Jayden & Kegan had previously secured that potential play-off places. A win for either Chessray or Bevin would mean the winner would walk away with bragging rights as 2016 Spring Cup Champion ! The match saw Bevin adopt a "park the bus" approach - but surprisingly Bevin took the early lead. As was then expected, Chessray started crafting chances and soon found himself level midway through the allocated time. Chessray then capitalised on a rare defensive error by Bevin to make it 2-1 and thereby securing his 6th WASPA title to date! Finally, a debut to remember for Antonio Abdeziet as he managed to secure 6th place overall!
As always - thanks to all for attending and making the day a success once again.