Gareth Christie on top of the Scottish Circuit

Fourteen players gathered at David Lloyds in Dundee to contest the first of four national championship events and it was superb.

Here is a rundown of the day with some facts and figures.
The day got underway with the draw ,a very exciting moment as all the players gathered and waited to find their fate! 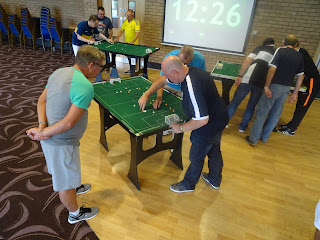 got underway and it pitched up a first ever matchup for the two latest recruits to the game as DUTFC's Dave Minty and John Mathieson of Glasgow TFA. To be fair to Dave this was his first ever competative game while John has been a regular at the Glasgow club for a while now, the experience showed and John won it 5-0, fair play to Dave as he didnt let it dampen his day.
There was a battle between Dave Baxter and Greg Dand and it was Dave who took the lead but conceded a late equaliser as Greg scrambled it back for a draw, a very good result for Dave.
Meanwhile the ever improving Craig Thom lost narrowly 1-0 to Baver Bari whilst Glasgow's John Halpin and Dave Gladman shared the points in a 1-1 draw.

Round 2
saw a real firecracker between Malcolm Lees and Tom Burns, at one point Tom was 3-1 up but the open style of play by both players meant that there was always goals in this one and Malcolm grabbed another two goals to tie the game at 3-3. The battle of Rannoch was eventually won by Rob Conway who beat Andy Beskaby 1-0 with a goal late in the second half, Mr Conway getting the better of his neighbour this time.
Greg Dand got himself back into winning ways with a 4-0 win over Baver bari, Baver competing well and a very creditable result for him.
It was a tough loss for Craig Thom as he went down 5-0 to Dave Baxter who was obviously on a role after his earlier draw with Greg.

Round 3
enter the current Scottish Champion Gareth Christie put an end to Andy Beskaby's hopes with an impressive 3-1 win, this was to be one of only two goals that Gareth conceded all day and that was curtains for Andy.
Then there was a piece of history created, Tom Burns finally beat Steve Bennett, this was coming as games lately have been closer and closer and Tom got the ten year old monkey off his back with a fine 2-1 win.
There was a GTSA battle as John Halpin found his shooting boots and dispatched John Mathieson 4-0 whilst Dave Minty lost 4-0 to the experienced Dave Gladman.

Round 4
saw Dave Baxter qualify from his group with an impressive 3-1 win over Baver Bari, Greg Dand was in full flow as he took no pity on Craig Thom and fired in seven without reply.
In a battle for top spot in group 1 and the bragging rights, there was a 2-1 victory for Gareth Christie over Rob Conway, Rob getting closer!
After Steve Bennett's loss to Tom Burns he was facing elimination as he went into the final group game against Malcolm Lees, Malcolm only needed a draw to qualify but crumbled 6-0 and went out.

Round 5
only saw two games to complete the group stages, John Halpin fired seven past Dave Minty without reply and a superb result for John Mathieson as he drew 1-1 with Dave Gladman, a great result for John!

Quarter-Finals
and down to the the serious knockout stages, and with the new random draw system implied by the STFA this season it has paid off as we see some new faces in the latter stages of a tournament.
Gareth Christie saw off any challenge from Dave Gladman with a convincing 4-0 victory. Gareth in control of this one and did a real professional job.
Tom Burns did likewise as he repeated that same scoreline over David Baxter but Dave will be kicking himself after all the hard work he put in in the group stages.
Next up was a real cagey affair between John Halpin and Rob Conway and this is one that Conway will want to forget, one goal up at half time and cruising with nothing coming from Halpin at all in the first half and this really was one of those games where you didnt expect it to end the way that it did. In the second half John began to apply a little bit more pressure and scored a brilliant equaliser which rocked Conway and put him off his stride and with only minutes remaining it was John who squeezed one in under the keeper, Conway Robbed!
The last quarter final was worthy of being a final as Dand and Bennett went at each other with real determination, a real end to end match with Steve opening the scoring and Greg replying soon after, Steve took the lead again and Greg fired another one past Steve. The match was on a knife edge and with two minutes remaining Steve got the winner, this thriller was won 3-2.

Semi-Finals
with Dundee United's Christie v Bennett and Glasgow's Burns v Halpin.
You couldn't get two games with as much rivalry as these and nobody wants to lose but as with all games someone has too.
Gareth Christie saw off Steve Bennett with a 2-0 victory in a quite hectic affair, Steve squandering plenty of chances whilst Gareth efficiently took two of his and dumped Steve out of the tournament.
Meanwhile on the other pitch it was Tom Burns who eased his way into the final with a convincing 3-0 win over John, was this to be Tom's day?

The Final
got underway with Tom's hopes high with the chance of a tournament victory only thirty minutes or so away but there was one snag, Gareth Christie!
A fairly even game for the most part but it was Gareth who fired in a long range effort after ten minutes to take a 1-0 lead into half time.
The second half got underway with all to play for.
Tom starting to get a bit more pressure on Gareth's goal but couldn't find the target, hitting the goal frame a couple of times but it just wouldn't go in and with five minutes remaining Gareth rounded off an emphatic day by scoring a second.