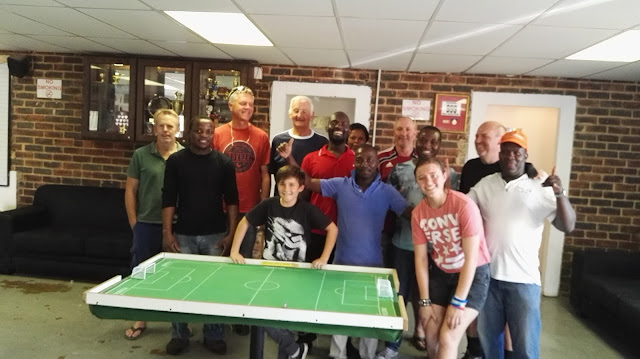 This past Sunday saw 11 year old, Jason Pienaar, continue his impressive recent performance at the Panorama Subbuteo Festival by making it all the way to the Final. On his impressive route he accounted for various senior players and received the plaudits from all attending players.

Although a smaller than expected crowd attended the tournament, 10 players were divided into two groups with the top 2 players qualifying for the knock-out stages.


The final qualifying position in Group B had to be contested via a barrage game as both Greg Green and Waynne Pienaar ended with identical points and goal difference. Greg defeated Waynne in a penalty shoot-out by 3 goals to one with Greg's winning goal coming from the most acute angle and nestling in the top corner.

There was a few interested onlookers from Malawi and Zimbabwe who are keen to partake at our next tournament. Abraham Siame from Tanzania, who recently received a full Subbuteo set from a kind benefactor, showed his much improved skill by storming to two early victories to claim top spot in Group B. Clifford and Jason qualified from Group A with the only lady present, Alyssa Green showing improvement with each game.


In the semi-finals, Clifford defeated Greg and Jason upsetting form player, Abraham Siame in a tense penalty shoot-out by 3 goals to 1 and showcasing his calmness under pressure against a voiceferous Abraham.


Greg Green found his shooting form in the Third place play-off by scoring three sublime goals without reply against Abraham, who easily won the prize for the player with the most 'passion' on the day.

The final pitted favourite Clifford against Jason who showed some deft touches way beyond his youthful age. Jason proved an extremely capable opponent, however a few defensive errors allowed Clifford to capitalize and score two unanswered goals and claim the title.

One of the highlights of the afternoon was each player enjoying pancakes and ice-cream from tournament sponsor and Clifford's vivacious spouse, Nita.
Thanks to all for attending and enjoying a festive tournament where laughs and friendship was the ultimate winner.