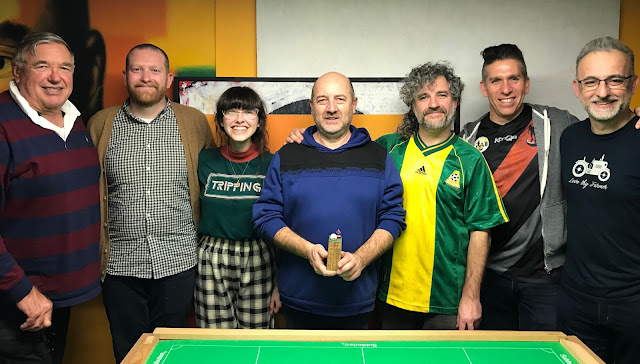 The September Cup has returned after two years of COVID cancellations! 6 players came along for dinner before the big event, with a 7th joining them in time for flick-off. The September Cup is famous for its 'Subbuteo only' policy - all games played on cotton and nylon pitches, all bases original Subbuteo, plastic goals and tiny little Subbuteo goalkeepers! With different base styles used as a handicap, and the unfamiliarity of how to use them, kept things open across the tournament. 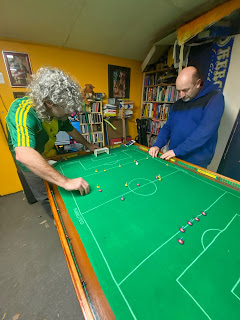 In Group 1, Franck and Steve battled out an excited 1-1 draw while Adrian managed a solitary goal past Antonio. The second round saw Adrian put two into Franck's plastic goal, while Antonio pipped Steve 2-1. In the final round's battle for places, Antonio eased to a 3-0 victory of Franck while Adrian had another close 1-0 win over Steve to top the group.

In the other half of the draw, draws were the order of the day! As the players battled with the ball changing directions on hitting nylon fluff, Imojjen drew 0-0 with both Costa and Ben, while a solitary goal to Costa in his game against Ben shot him to the top of the table.

In the consolation rounds, Ben struggled against both Franck and Steve, conceding two goals in each game but maintaining his position as using one of the tournaments most attractive teams in their Scottish red socks. 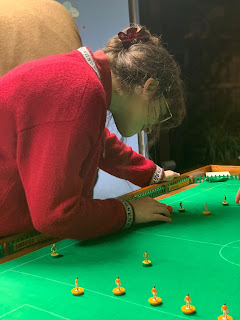 The semi-finals saw Antonio ease past Costa, thanks in no small part to Steve Dettre's unfortunately timed bad dad joke, distracting Costa just as Antonio pulled the trigger for his first goal. On the cotton pitch, Adrian took an early lead against Imojjen and seemed to be cruising until he left a big whole in his defense with 3 minutes to go, Imojjen obliging by marching through it and scoring for the second consecutive competitive match against her father. This time, however, she held on for the draw, forcing the game into shots. Adrian made a complete hash of trying to save Imojjen's first shot and, though tying the scores up midway through the shootout, choked when it counted, with Imojjen burying a crack for her 4th shot, and Adrian following this up with a miss in his final shot to see Imojjen through to her first ever tournament Grand Final.

In the 3rd/4th play-off, Adrian dominated possession but struggled to make any meaningful attempts on goal until late in the game, where he finally found a way past Costa's defense to take a victory.

In the Grand Final, Antonio scored an early goal which gave the impression he would cruise to the title. Imojjen, however, had other ideas and put on a fine display for the rest of the relatively even game. She couldn't, however, fashion any clear chances and Antonio was able to see the game out, reclaiming the title which he last won in 2018.

An excellent evening of Subbuteo, with tight tussles, upset results and frustrations with old equipment being the features of the evening. We now look forward to next year's 20th Anniversary edition of the September Cup.