It was with great pleasure that "subbuteo.ch" of Swiss-Subbuteo organised another Swiss-Cup with some good international participation on September 11. The tournament took place at the Rest. Hard in Birsfelden/Basel. Once again, fair play, fun and friendship were in the foreground.

Group A was won by Clinton Gähwiler (South Africa) from Cape Town City Subbuteo Club ahead of the Swiss crew. 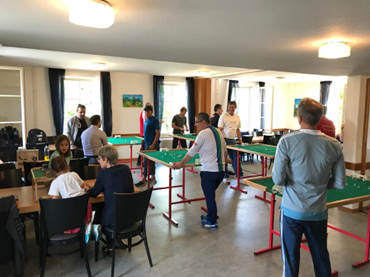 Group B was won by Eric Lienhardt (France) ahead of Renato Parussini (Italy) and Panagiotis Krommydas (Germany) aka "Pana".

In the semi-finals Renato was successful against John Imbrogiano (Switzerland) while Eric defeated Pana. The big winner is Eric Lienhardt who won the final (2-1) against Renato. In the small final Pana won.

More importantly, it was great to have 10 different players from South Africa, Italy, Germany, France and Switzerland taking part in a Subbuteo day all together under WASPA banner.

Special thanks from WASPA to Peter Erb for a great organisation!