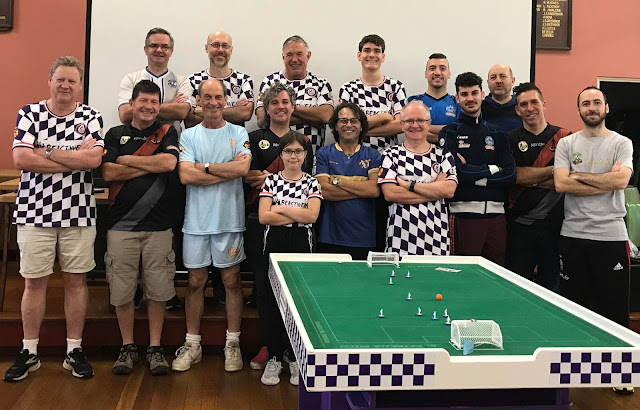 Fabrizio Coco claimed the 22nd AGFA Cup with a 3-1 win against Adrian Grunbach.

A change in format to have 2 groups of 8 players catered for our interstate visitor Giuseppe Tardiota (Brisbane Subbuteo) to give players as many games as possible.

With the lightning 15-minute matches, those 7 group matches equated to 3 1/2 normal games and then a final ranking match.

Special mention must be made to Paul Mercer who created a brand new competition sheet to run the event, and to Tom and Janice from WIlloughby Park Bowling Club for arranging the space.

Things got off to a cracking start with Tony Credentino on fire against Johnny Ball (4-0), and Giuseppe also 4-0 over Billy Koutzas.

By the end of round 3, things started to take shape, and then in round 6 a few surprises shaped the final phase.

The semi finals had two close battles, with Adrian Grunbach and Eliot locked at 1-1 before Adrian wom 3-1 on shots, while Fabrizio and Tony battled to a 0-0 draw before a marathon shootout ended 4-3 to Fabrizio.

In the final, Fab started like a house on fire and roared to a 2-0 lead before Adrian pulled one back, and then Fab finished things off with a 3rd.