Third stage of the Scottish circuit: the honors for Steve Bennett 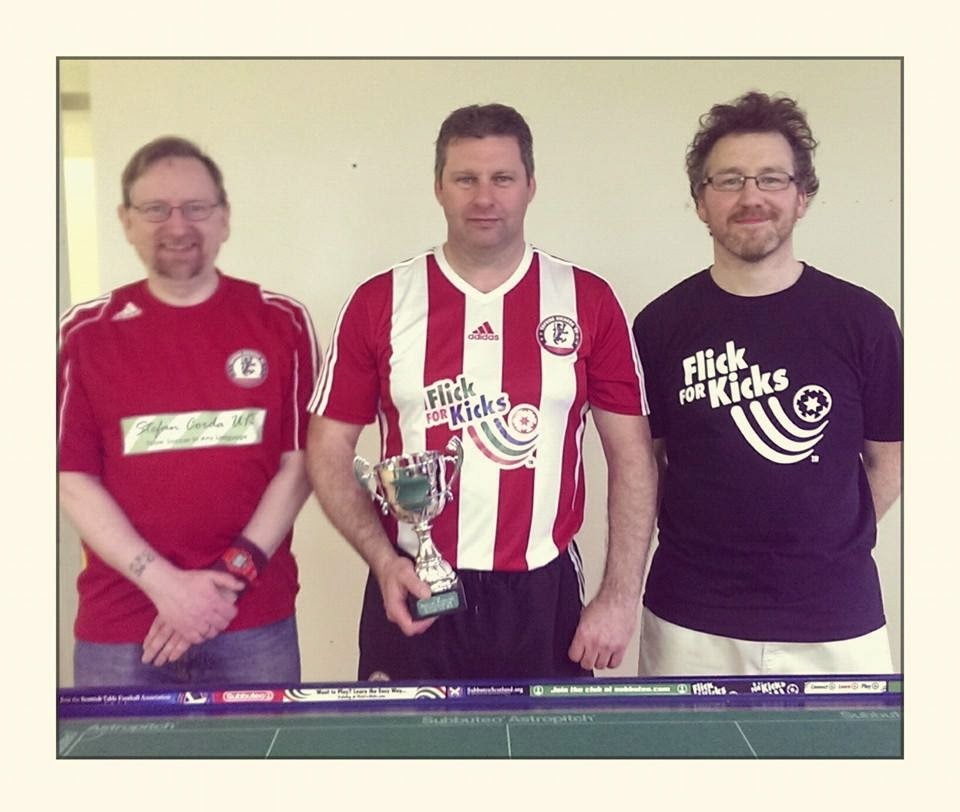 On May 4th, 11 players took part in the third and final Scottish circuit event of the 2013-14 season. Of the three tournaments, each players' best two event results counted towards their final Scottish Championship points for the season and were also all WASPA events.

Before play began on Sunday, Steve Bennett and Gareth Christie (both Tayside Kickers 91) were tied at the top, both with a win and a second place previously. The remaining positions were all up for grabs so every game had significance.

While numbers were affected by a surprise birthday party the night before for Willie Flemming's 60th birthday (Glasgow TSA), those that made the trip all enjoyed a good days play with many close matches and a relaxed atmosphere.

Congratulations go to Steve Bennett for both winning the tournament and clinching the Scottish title after closely fought key wins. Elsewhere Scott Fleming (TK91) and Dave Gladman (GTSA) earned their highest finishes of the season with 3rd and 4th place respectively, to climb the table.

There were some great matches of note, such as new player Rob Conway stealing a 2-1 victory against training partner Andy Beskaby, with a wonderful deflection shot goal in the dying seconds. Andy, also a recent new player later had his own success coming back from 3-0 down to draw with Ben Staples (NETFA). Baver Bari (HCE) had a tough day, but scored some excellent goals and was unlucky not to win after going 2 down against Martin Phee (GTSA). Tom Burns was disappointed on the day, but retained 3rd place in the Championship and vowed to "split the Tayside two" next season. Tom will undoubtedly be a contender next season after running close in many games.

A note about the venue: This was the first event to be held at the studio space of FlickForKicks, and as such was a trial for hosting the Tayside IO there on 14-15th June. With ample space, good on-site facilities (farm shop and restaurant downstairs, plenty parking) and with a picturesque balcony view across the hills and River Tay estuary, the feedback was positive. With a few tweaks, the IO will go ahead there.

Finally, members of the STFA would like to thank Ben Staples for making the trip from south of the border, and also to wish Willie many happy returns and all the very best!