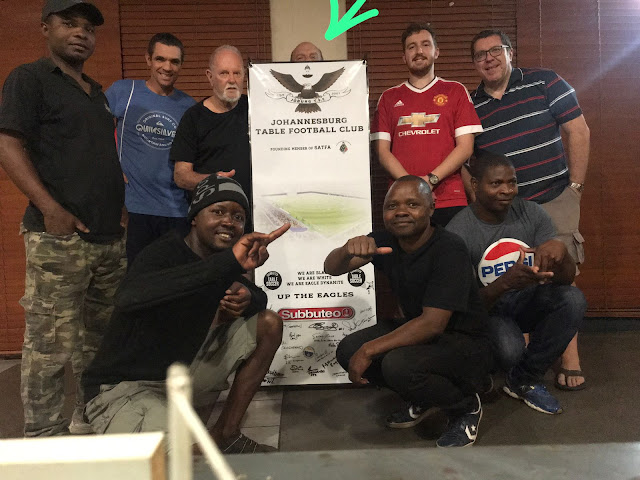 The Johannesburg Table Football Club aka 'Joburg Eagles' hosted their second in the series of 'Eagles Nite Series' Events on Thursday the 27th of October in their lavish and upmarket home venue of the Randburg Astro Hockey Club. The second series event was named the 'Floodlite Nite Challenge Cup'.

This is a new and exciting iniative by the Joburg Eagles in hosting numerous Nite Series Events during the season whereby points will be awarded to each participant for each event based on their finishing position. Overall Series Trophies and medals will be handed out at the end of the 'Eagles Nite Series' in August 2023.

The full list of Nite Series Events has been finalized and will be published on the Joburg Eagles facebook page shortly.

Once again 'Just for You Meals' sponsored delicious toasted curry chicken sandwiches and boerie rolls which were duly consumed.

Once again there were a lot of spectators watching resulting in great marketing value for the Joburg Eagles.

All players participated in the Swiss system format resulting in multiple games for all players.

Clifford, Ian and Fernando tied their respective games resulting in goal difference separating the three players in the closest

finish yet at a Joburg Eagles event. Clifford edged out Ian, who narrowly pipped Fernando in the final placings.

The next event in the Eagle Subbuteo Nite Series is the Remembrance Day War Veterans Cup to be held on the 10th of November at the Randburg Astro Hockey Club. A minutes silence will be held before flick-off in honour of all our fallen comrades.

Please wear a poppy to the event, if not, the Joburg Eagles will hand out poppies to all players.

See you at our next, very special event!