We are pleased to publish the report received by Andrew Martini, a New Zealand Subbuteo player based in Japan. Andrew played a WASPA test-match last week against Belgium's Stéphane Lambert and he's glad to share his experience. It's definately a great experience when two players from different countries meet for the first time, play competitive games and share the same love for the game.

"On October 27th I held a test-match series here in Kuki city, Saitama prefecture Japan with visiting Stephane Lambert of Belgium under the WASPA banner.

It was a great occasion to finally meet in person after 2 years of friendship on Facebook, and also it gave the both of us a chance to use and test some new bases.

We also had another reason to meet up, and that was to prepare for the upcoming Fistf Japan Autumn Satellite tournament which would take place on October 29th, I was eager to get some good solid games of Subbuteo table soccer in after being completely away from the sport for over a year, I hadn't even flicked once in around 14 months. 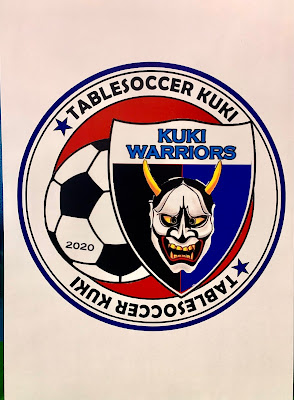 The bases Stephane wanted to try out for this test match series were the Tcha 2.0 arrows HW, Tcha 2.1 HW arrows and the Extreme works pro evo 1 bases.

I wanted to try the Astrobase cc5 tribases for the first time today under recommendation from Brian Andrews (United Kingdom).

The test match series was played on an Astrobase Astroturf pro pitch.

We assembled our teams, polished the bases, and got our beers ready...just before kickoff we cracked open a few pints of kirins classic Kirin Lager beer and commenced playing in the spirit of friendship and fun!

The games were indeed a fun-filled, good paced fairly close contest throughout that only became even more enjoyable as time went on, with the help of Japan's finest beers to keep the kovial atmosphere flowing, starting with Kirin lager classic before polishing off several more 500ml cans of Asahi Superdry.

The day belonged to Stephane though winning  1-0, 2-0 before I managed to hold him to a 0-0 draw, with the final game also belonging to Stephane by a slim down to the final minute1-0 margin. Although losing the series 4-0, I was quite satisfied with my defensive ability after such a long layoff away from the game, and the fact that I was able to pick up the game and get in the groove fairly quickly, with Stephane's help.

The most important thing though was that Subbuteo won the day in an atmosphere of light-hearted fun and good times had by both of us!

We were ready to head to the Fistf Autumn Japan satellite tournament on Oct 29th, where Stephane finished in the last 8 and I managed to surprise myself and go through to the last four and finish in 3rd place.

Oh, and I hope to have more test match series with visiting players...so ...

If anyone is planning on visiting Japan in the future, make sure to definitely visit me, and let's play some fun Subbuteo test-match series together too ( Japan beers will be free!) you can always reach me at andymartini1969@gmail.com.

Looking forward to seeing you for more games under the WASPA banner here in Japan!"