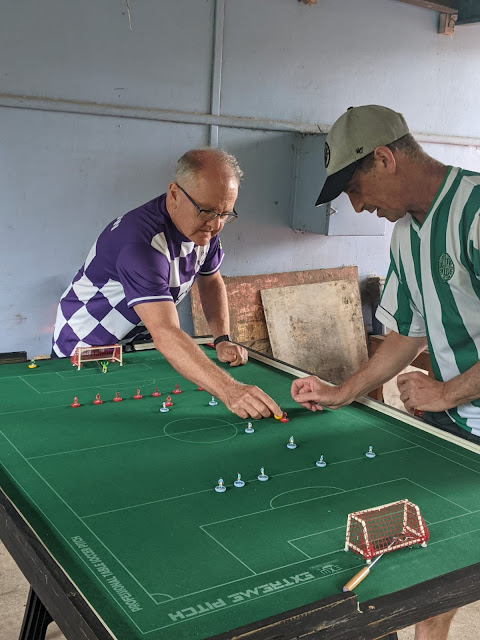 It has been a bad year for Subbuteo in Australia. For Western Sydney Subbuteo COVID-19 lockdowns and restrictions have meant that it wasn't until the final few days of the year that we could hold our first tournament of the entire year! The annual Christmas Binge WASPA Tournament saw its 4th incarnation draw a small but enthusiastic crowd. The 'Clubhouse in the Carport' was again put to use to minimise COVID risks, with some slight winds having effect at a few stages during the afternoon, but nothing this experienced bunch couldn't cope with. 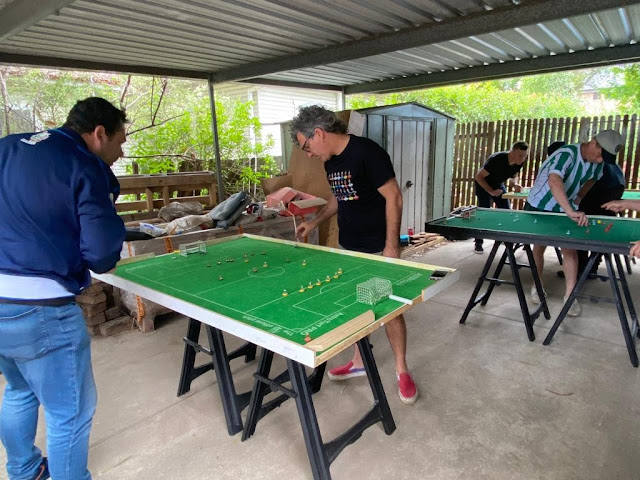 The day belonged to the only entrant from Northern Falcons TFC - Eliot Kennedy - who went on a ruthless goalscoring spree throughout the afternoon, dispatching his nearest three rivals 4-0 (Geoff Sirmai - Hipfingerz TFC), 4-0 (Adrian Elmer - WSS) and 3-0 (Costa Kamarados - WSS). There was no denying Eliot's claim to the title of the tournament, which used a Swiss System.

Further down the rankings, Geoff and Adrian finished on equal points and, not having played a head-to-head match to split them, took an equal share of second place. After their respective losses to Eliot, Geoff picked up a tightly fought win over Costa (1-0) before easing to victory against Stefanos Milatos (Sydney TFC). Adrian had an opening round victory against Stefanos before finishing up with a victory over his clubmate, Franck Cozzarin (WSS).

With his slim loss to Geoff, Costa had to settle for 4th place, going ahead of Franck based on their head-to-head match, which Costa won 1-0. Franck picked up a victory against Stefanos to slot him above Stefanos on the final table.

The highlight of the day, though, of course, were the Christmas leftovers (1 Panatone, 1 Celebrations Chocolate Box, 1 Box of Lindt Balls, 1 Packet of Gourmet Almond Shortbread, 2 Pear Ciders, 4 Cans of Coke, 1 Can of Vanilla Coke) consumed, the traveling fans (Franck's entourage being inspired to possibly enter the upcoming Sydney Open) and Eliot & Geoff's trading of ever more cringe-worthy puns.

A big thanks to all who attended and, very hopefully, here's to a LOT more tournaments in 2022! 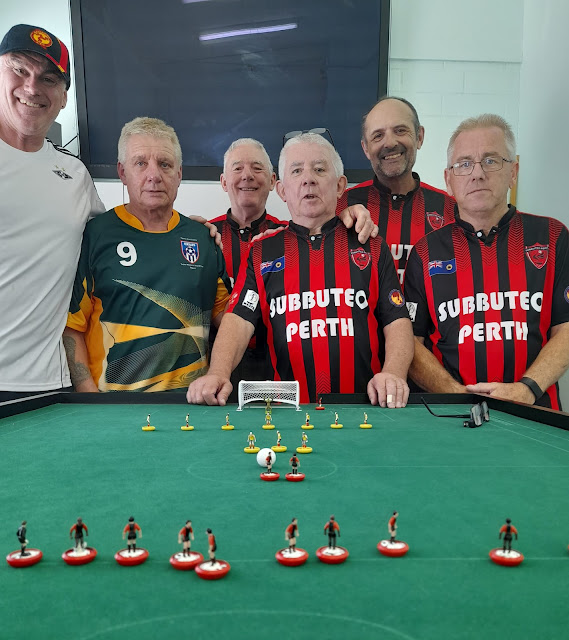 Earlier in the month, Alan Kimber finished on top of a group of 6 to win the last Perth tournament of the year. Brian Pearson and Mick DeVincentis were tied for place 2. Final standings: