Here is a quick look at results of tournaments held in the last few weeks in the UK.

During the Wrexham International Open in Wales, 11 players competed in the WASPA Plate tournament. Rudi Peterschinigg (Harrow Hawks) was in a great day and took the trophy after beating London Road's Brian Daley in the final.

The Liverpool club was back in action on October 17 and Royal 78's Elliot Bellefontaine finished on top of a group of 6. Here are the final standings:

The monthly London Road tournament in Wales had a small turnout of 5 players. No surprise this month as Brian Daley won his four games to claim the title.

The new club of Durham City TFC held a first WASPA tournament. Three players competed and had a lot of games. Graeme Gibson defeated Allan Ranson in the final, which was played in the best of 3 games. Welcome to Durham City TFC! 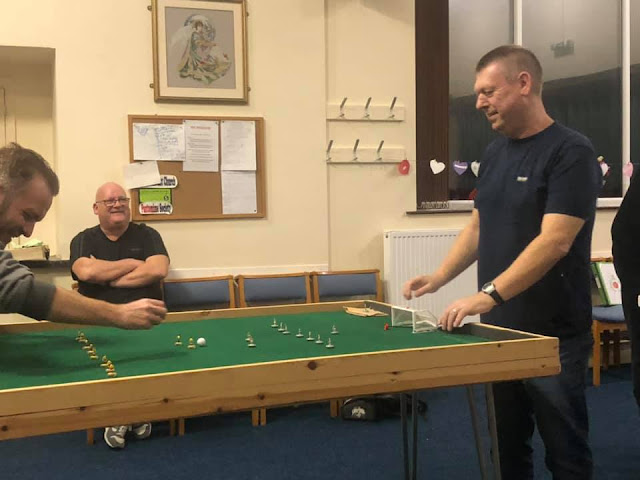 The last tournament in England in October was played in the premises of the East Lancashire Subbuteo Club. 10 players were divided in 2 groups before the knock-out rounds. Brian Daley defeated Manchester TFC's Danny Lilley in the final while Shaun Dunne and Dave Scholes were the semi-finalists and Gavin Roper beat Lucasz Whittle in the Plate final.

We are also pleased to see a new club in Oxforshire. Sport Vale TFC held a first tournament in November 1. Steve George, who is also the local organizer, won the tournament. Paul Ridler and Mark Lyne were the other players taking part.

Our friends in Dudley-Kingswinford also held another tournament on November 2. Due to covid restrictions, only three players were present. Derek Air was unbeaten and won the event. Campbell Air was runner-up and Ryan Marsh was third.