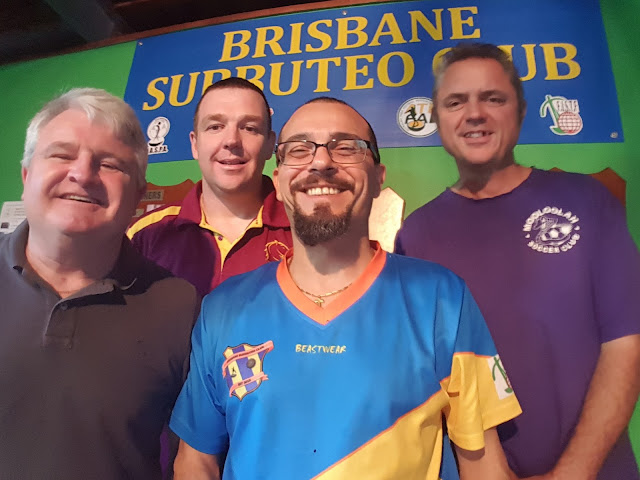 10 June 2017 and our 28th tournament was held at the Woody Point Clubhouse. We started at 1.00pm on a pleasant "winter's" day with host Giuseppe 'Pino' Tardiota, Gus Gillespie, Gareth Whalley and Shane Robinson.

A 'home and away' round robin was put in place and commenced with Gareth against Gus and Pino playing Shane.  Despite a high pressing game by Gareth, Gus played his methodical game to score three times without reply. In the other game Pino was always in control of a relaxed 2-0 result against Shane. 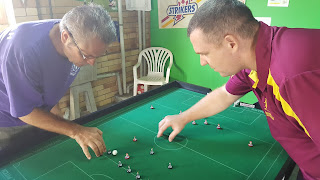 Next up Pino played Gareth and again looked relaxed as he controlled the game winning 2-0. Gus and Shane continued their ongoing run of close matches, this game highlighted by opportunities and saves at each end. At full time, Gus took the game 1-0.

Game three matched Gareth against Shane. This match was very close and was only sealed 2-0 with a late goal by Shane. Gus took on Pino in a game that would possibly decide a clear group leader. It was played with their usual competitive cut and thrust tactics, Gus using method and close touch versus Pino and his direct approach. In the end a 2-1 result to Pino placed him top after the first round was completed.

Match four saw Gus hit top form by beating a shell shocked Gareth 5-0. In the other game, Shane managed a creditable 1-1 draw with Pino, both goals having been well worked. Match five results were interesting. Gareth again allowed a bunch of goals with Pino winning 5-1. Scoring goals is something Gareth has been working on and it was a positive in this game. 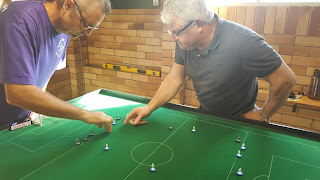 The other match was interesting....Shane took a two goal lead to halftime against Gus with a couple of nice chips. Within minutes of the restart, Gus chipped in from the same spot and was level after about five minutes. Then, minutes later, a stray shot from Gus across the box brushed the underside of Shane's hand on it's way to a goal kick. In the spirit the club, Gus was awarded then penalty which he duly scored. Shane hit the underside of the crossbar twice in the remaining time but Gus won 3-2.

In the final matches, Shane lost 0-1 to Gareth who deserved his win after some great pressing and probably the goal of the day. After leaking a few goals in earlier games, Gareth was determined to get a result and threw everything into blocking. The goal was much deserved due to the opportunities he has been creating.

The final game was between Pino and Gus. Gus needed to win, Pino only needed to draw. In another fine match, both players stuck to the task and in the end, Pino got the result 2-0.
Overall, there were more great games and close results. Gareth has continued to adapt to the "new style of figures and tactics' and admitted it was nice to win a game after being belted a couple of times.