Danny Lilley is not only a subbuteo player from England. He's also the organizer fof the Manchester club, the manager of Supaslide (WASPA partner) and the guy who launched the Sliders Tour in England. 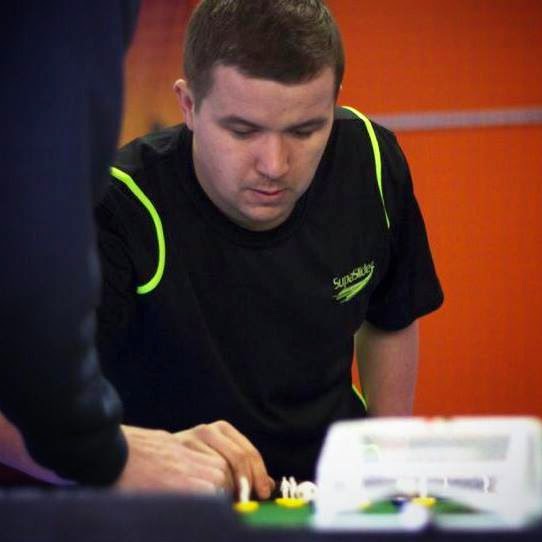 When did you first start to play Subbuteo and what was the first team you got bought?
Danny Lilley: I played when is was 8 and my first team was Blackburn Rovers

How many years have you been playing and what are the main titles you have achieved in any level?
DL: Been playing for 3 years now and slowly progressing.

What is the best thing about this game and why would you recommend it to someone?
DL: The pure energy it creates around a small table. Plus the tactics.

Your most memorable moments from this game happy or even sad?
DL: Best moment is scoring top goals against top players

Who was your strongest opponent and who is your favorite player and why?
DL: Vasco Guimarães, Simply the best

Is it a sport or a game ? what is your opinion about this question that many people ask?
DL: It’s a sport, sport is a competitive action that brings mental techniques and fitness, this as the lot.

What improvements would you like to see in the future and what would you suggest to improve things?
DL: Keep it as is now, perfect, maybe all EW pitches

What would you recommend to someone who starts the game now? What are the secrets for top performance?
DL: Relax, Go as fast as you see fit too. The game can be won with technique rather than speed.

What are your feelings about how FISTF and WASPA are working and doing something for the game nowadays?
DL: Amazing! The game is growing day by day and FISTF/WASPA are the focal of that.

What about the WASPA rankings? Do they mean something for you?
DL: Yes, Another great idea to progress in rankings without disrupting the FISTF side.

You are involved in other sports. How are these other sports be important in your life?
DL: I play Golf and Darts too, Both sport relax me.

The Sliders Tour 2015 has been dropped off. Everybody thinks it's very sad. Can you let us know how hard it was to take such a decision?
DL: Yes, The Sliders Tour was a success in my eyes and many others. The English Association as more event this year and didn’t want to disrupt that in any way. I respect the association in England, Being a former Chairman, I know how hard it can be to run.

What are the plans for the future of the Manchester club?
DL: I really want to grow Manchester TFC, We have money to back any project, we now just need the quality players to compete across Europe, it will get their, Manchester Is the biggest football city in the World, It needs a Subbuteo Club.