Fabrizio Coco wins the first tournament of the Northern Falcons 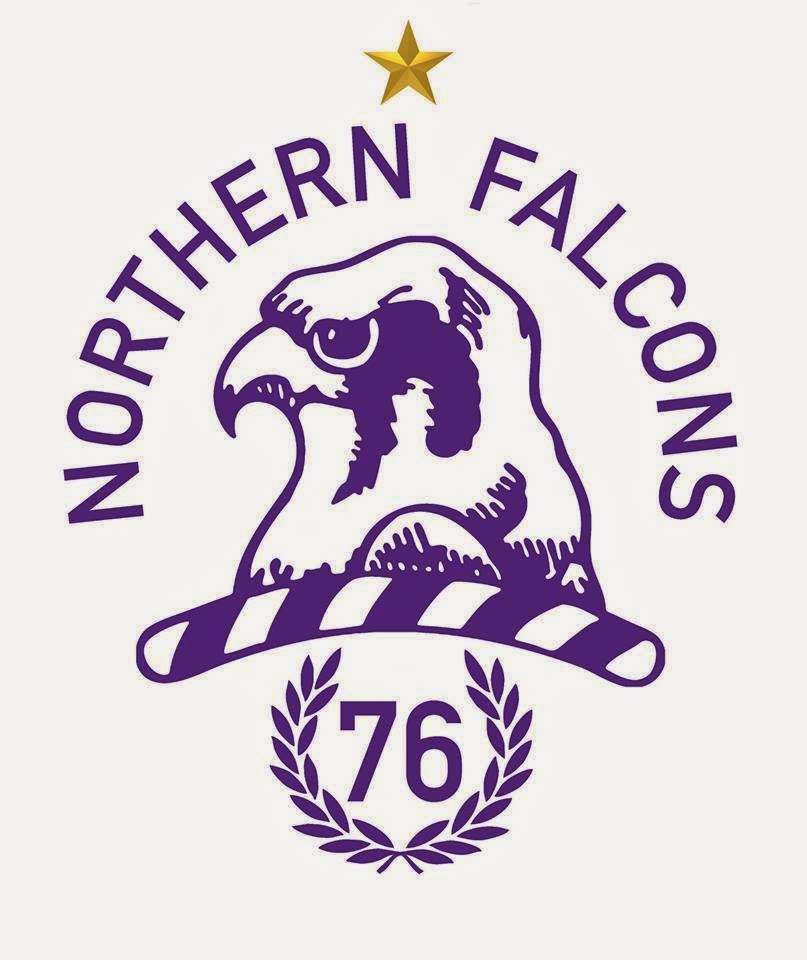 Chatswood. The ‘lower north shore’ of Sydney. Not far from where the Northern Falcons were born in 1976 in Roseville, as well as from where many of the players hailed: North Sydney Boys High School, appropriately located on Falcon Street. 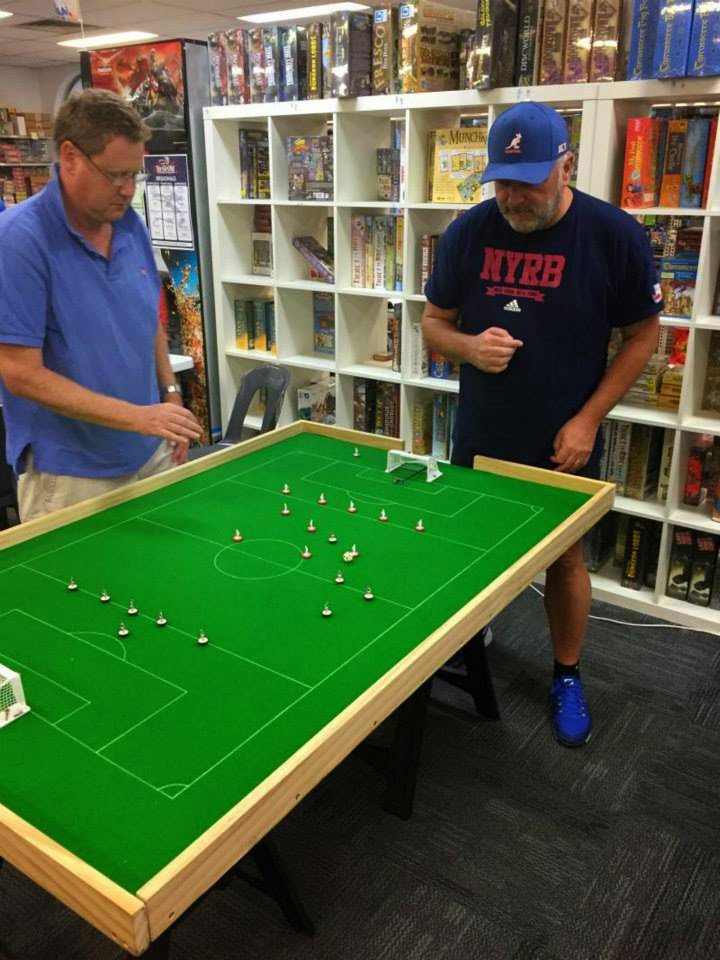 And now some 39 years later, another gathering of Subbuteo aficionados, slightly thicker waists, dodgier backs and knees showing the effects of decades of football injuries, but still having the passion.

Some younger ones as well: shock, horror, two born in the 90s, three in the 70s.

Mere interlopers for the main game that revolved around talking about past glories, catching up on lost decades.

Twelve hardy souls out on a balmy summer night in Sydney, tackling the first of the Northern Falcons Mk II competitions, a regional WASPA event.

A great venue, Good Games, a haven for all types of board gamers, role players and competitive card games. 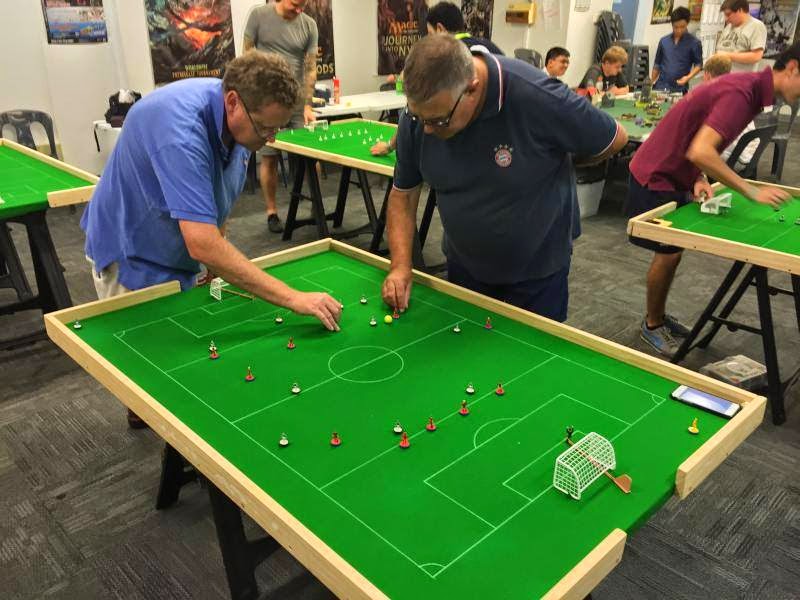 Four tables with classic Strachan 6811 snooker cloth pitches, which admittedly took a match or two to ‘settle’ after a month of inactivity.

Three guests from Subbuteo Parramatta, or should that be Calcio Tavolo Parramatta? Stalwarts Daniele and Raffaele Lombardi along with Fabrizio Coco, all quality players, joining the old mates: Steve Dettre, Eliot Kennedy, Johnny Ball, Simon Cole, Stuart Codling from the days of action in the 70s, and then Dominic Grenot and Will Johncock from the 80s. Added to that was Steve’s son Louis, a recent convert to the game, and Hermann Kruse, a recruit from Germany. For Simon, Stuart, Dom, Hermann and Will, it was their first taste of competition in the ‘new era’ of the Australian game.
The action started with one upset: Will beating Daniele 1-0, which cost Daniele a place in the Qfinals. Eliot and Fabrizio battled to a 0-0 with a range of shots failing to produce a winner. Steve once again drew his son in a competitive match, and Louis responded by pushing him all the way, missing with a glorious shot on the run that skipped just wide as Steve fumbled for his keeper.  Johnny and Stuart experimented with Sniper 2.0 as well as their traditional 00 figures, and Stuart scored a creditable 1-1 draw with Dom. 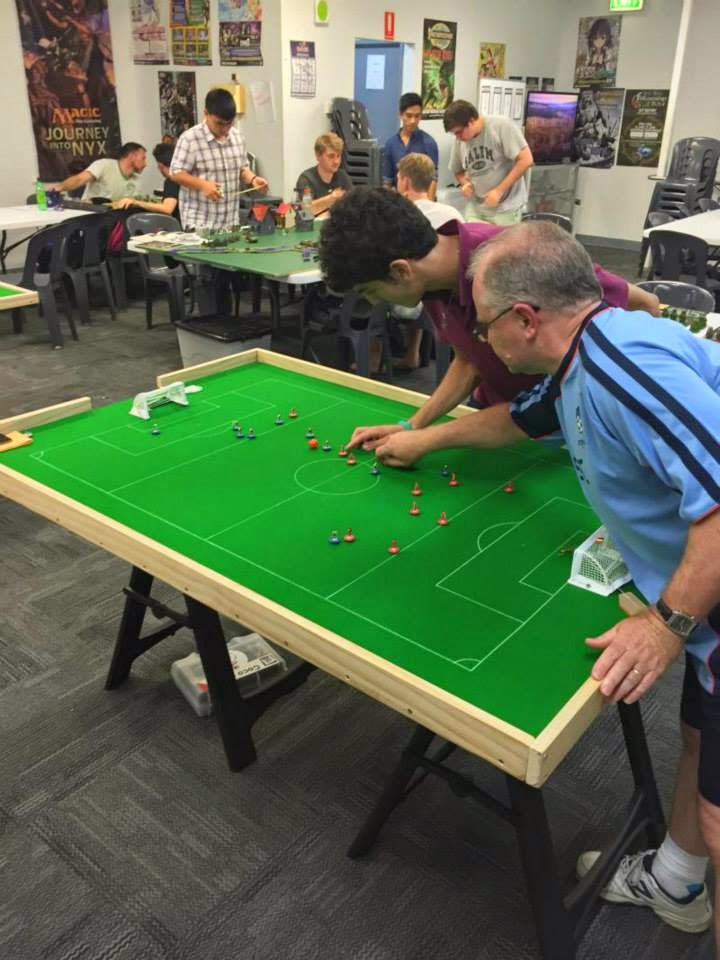 To determine final placing, Steve and Louis had to resort to a shootout as they finished level in their group, and Steve prevailed 4-3.

In the quarter-finals, Johnny had to fight all the way to beat Louis 1-0, who was lining up for a possible equalizer when the buzzer went. Fabrizio and Eliot scored comfortable wins, and then met in the semi where once again shots were Eliot’s downfall. Steve beat Johnny by a comfortable 3-0, but the long range shooting deserted him in the final, where the precise, accurate build-ups by Fabrizio stretched his defence. So at 0-0, it was down to shots, Fabrizio claiming the prize 2-1. And then it was off to the pub, to analyse “that flick”, “that shot” and “that curl”.

And to agree that Subbuteo really was the winner.