Sunday the 21st of February saw the playing of the annual Johannesburg Open Subbuteo Tournament.

This is the oldest official Subbuteo Tournament not only in South Africa but Africa, and dates back to 2008 when the newly formed Johannesburg TFC aka The Joburg Eagles hosted the first official tournament under the auspices of the South African Table Football Association (SATFA).

Unfortunately due to the persistence of the lasting Chinese Covid pandemic, numbers were down. However 8 players joined in the fun with a big welcome to Samora Adams who was playing in his first tournament. 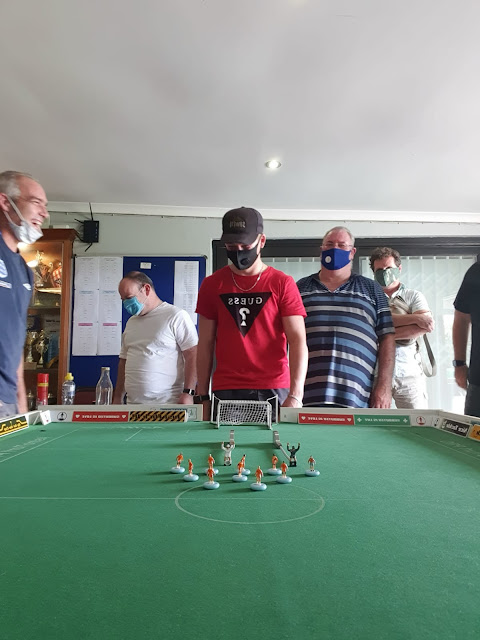 The 8 players were drawn into 2 groups and the top 2 progressed to the semi finals with the remaining players competing for positional places.

Group A saw home town favourite, Clifford top the group by narrowly pipping Gary Downs, who has recently formed his own Subbuteo club in the East Rand area of Johannesburg, namely the Easterns TFC on goal difference.

Group B was a much tighter affair and was called the Group of Death as three top players, namely Angus Begg, Liam Chapman and Jason Kennedy battled for the top 2 positions.

The last group stage game between Angus and Jason basically proved to be a quarter-final tie as the victor, Angus, claimed top spot and relegated Jason to third spot.

The semi finals saw Clifford eliminate the ever improving Liam Chapman by a single goal after a defensive lapse by Liam. The second semi-final was a cracker of an encounter between Angus and Gary. Gary got off to a great start and held a slim lead until minutes before the full-time whistle when Angus carved out an opening and netted a very good equalising goal. Penalties resulted and this was a topsy turvy affair whereby both players took the lead only to allow their opponent to come back. After a marathon penalty session, Gary prevailed by 4 goals to 3 and advance to his maiden tournament final as an Easterns TFC player.

The 3rd place play-off once again produced a tight game between Angus and Liam which was only settled via penalties. Angus got a slight measure of revenge by losing in the semis by penalties to pip Liam by 1 goal to 0 and claim 3rd place.

The final saw Clifford from the 'Joburg Eagles' take on on Gary from the Easterns TFC. Their earlier game ended in a one-all draw and once again a tight final was expected. The spectators were treated to an exciting game whereby Gary had two great opportunities in the opening few minutes only to see the ball fly wide. This presented Clifford with a few chances to open up the scoring. Gary overshot a defensive flick to let Clifford in for the first goal. Gary then threw everything up front for the equalizer, however he was caught on the break and Clifford netted a second goal to claim another Johannesburg Open title.

Once again, all entrants were treated to some great food in the form of waffles and ice-cream, courtesy of Nita!

Suffice to say, the waffles were greatly appreciated on a very hot February Sunday in Joburg.