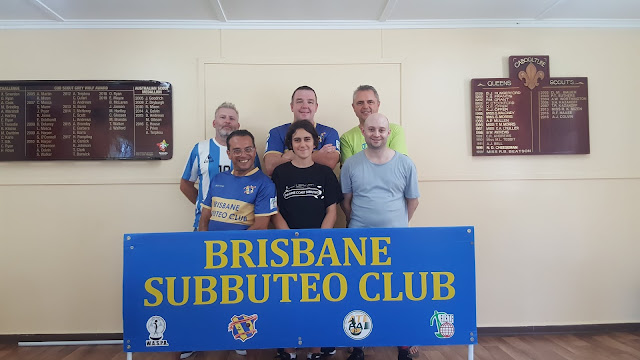 Brisbane Subbuteo Club held the on Sunday the 6th Club Anniversary/ WASPA Tournament postponed last month due COVID. Six Players turned up at the new venue in Caboolture. There were many goals and many exciting matches. Giuseppe Tardiota defeated Gus Gillespie in the final. Gareth Whalley won the game for the 3rd place against Kevin Halliday and Wayne Miller defeated James Gillespie to take the 5th place.

In Perth, the tournament played on Sunday attracted seven players cometing in a round robin. Alan Kimber and Ross McNulty finished with 15 points but Alan won the decisive game against Ross (2-1) to win the tournament. The finals standings were as follows:

Finally, it was great to see the Sydney boys back in action at the Northern Falcons game night on Monday. "Some rusty players but a fun evening. The highlight - or possibly the lowlight - was the almost interminable shoot-out in the semi final between Tony and Geoff, which was 1-1 at full time. We had earlier decided to go straight to shots in the event of a draw, rather than extra time, to "save time".... little were we to realise the multi-part drama that was to follow! It was 0-0 after 5 shots, with the keeper, the post and the fans behind the goal kept busy by our two protagonists. Tony finally broke the deadlock with his 9th shot, only for Geoff to bloody equalise, of course. The drama of non-scoring continued until the 14th shot, when Tony finally got a second and Geoff narrowly missed. Phew!! It had only taken about 15 minutes!", reported a very enthusiast Eliot Kennedy. Eliot won the final against Tony Credentino (Sydney TFC) to claim the trophy!