Several small tournaments have recently been played in Australia.

Nick Brill and Martin Kennedy shared the first place in the Canberra tournament held last week. The event was played in home and away games and both Nick and Martin finished the group stage with 10 points and the same goal-difference. Ryan Farrall was 3rd and Bruce Millar was fourth.

On July 1, Steve Dettre finished on top of a group of 4 to win the event co-hosted by the Northern Falcons and Subbuteo Parramatta in the premises of "Good Games Bella Vista". Adrian Elmer was runner-up, Ray Micallef 3rd and Vince Micallef 4th.

On July 19, Adrian Grunbach won a small tournament hosted by Subbuteo Parramatta. Adrian finished on top of a group of 3 while Adrian Elmer was runner-up, Mathew barrie was 3rd. 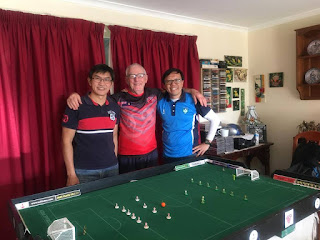 The format was a double round robin where the players faced each other twice. Carrying his recent hot form, Benny won all his matches to take out the WASPA title. Marc finished runners up while Chris Thorn completed the placings having picked up valuable tips from the more “experienced” players.

Most importantly, it was great fun day and everyone had a fabulous time ! And special mention to Barbara Thorn for the most beautiful vegetarian pizza ever. 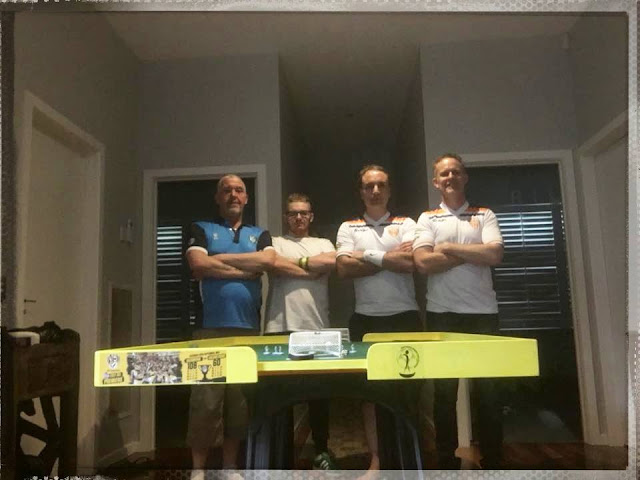 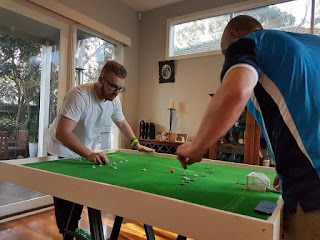 Hobart TFC tournament (report from the Facebook page)
With two Western Flickers members in Perth for the FISTF IO, and several Melbourne based players having competed the night before in the NPTFC WASPA, it was a small gathering that participated in the HTFC WASPA held for Yago Dzelalija’s trip to Melbourne. Yago was keen for some competitive action in the lead up to a European holiday that will include some WASPA action in Holland.
The format was a round robin league with each player playing one another twice, once on Astrobase and once on Extremeworks.
Kevin Grant surged to an early lead in the standings with a win over Yago whilst tournament host Adrian Connolly held Luke Radziminski to a scoreless draw. Luke soon worked his way to the top of the standings and looked set to build on his excellent results in the NPTFC WASPA the night before by strolling to the title. However, Adrian took advantage of his home advantage in the return fixture held on his Extremeworks pitch and caused the upset of the day with a 1-0 win. This meant the competition would go down to the wire with Luke, Kevin, and Adrian only separated by a point with two games to go. Luke held his nerve and took the title. Adrian remained undefeated but a further three points behind by virtue of drawing all his games on the Astrobase surface.
There was some side interest in the Tasmanian rivalry! Yago and Adrian were the founders of the Tasmanian Table Football scene 30 years ago. There was still nothing between them in their first competitive head to head clashes since the early 90s, with both matches ending in draws.
It was great to see a HTFC player in competitive action and holding is own in a small but strong field. Plans are being discussed to bring an event to Hobart if enough interest from interstate players can be generated.

New name for Parramatta
Following discussions amongst the active members of the "subbuteo parramatta club", they have decided to return to their roots and rebrand back to the name we started with in 2013 "Western Sydney Subbuteo". They feel that, with a move of the clubhouse away from Parramatta to Bella Vista, and because the name better indicates the diverse region from which we all come, "Western Sydney Subbuteo" best represents who the club is.

Agenda
As Herman Kruse is back in Sydney, people should not forget the next events:
- Friday, 3. August 7 pm Herman's monthly WASPA will happen in 27 Bertram Street. Panzerotti this time and white wine.
- Club's juniors international game AUS vs GER at 18th Aug.
Western Sydney Subbuteo will have a WASPA tournament on August 2 at Good Games Bella Vista (7.00 pm)
Publié par Vincentcop à l'adresse 22:34