May and June 2019: news from around the world

Here is a quick look as some of the events held around the world in May and early in June. 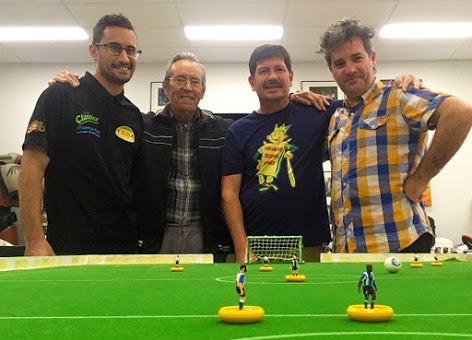 An all Western Sydney Subbuteo saw two of the Micallefs, along with Paul and Adrian, do battle at Good Games Bella Vista. A simple round robin, with each player playing the other was run. In the opening round, Paul put two goals past Louis while Adrian scored three against Vince, his new bases adding some chipping to his shooting. The same scorelines followed in the next round, with Paul slotting two past Vince and Adrian three past Louis. The final matchups were much more even affairs. In the father and son battle, neither could take the advantage with a 1-1 final result. Meanwhile, Paul conceded his first goal in his last six competitive fixtures to also finish with a 1-1 draw against Adrian, leaving them ties at the top of the points table to share the honours.

Giuseppe Tardiota winner in Brisbane
Brisbane had a small turnout of three for their monthly tournament but there were many close games with Giuseppe Tardiota finishing on top of the group after home and away fixtures to claim his 17th WASPA title. New Zealand's Gerry Vickers was runner-up while Gareth Whalley took the third place!

Christos Agrios does it again 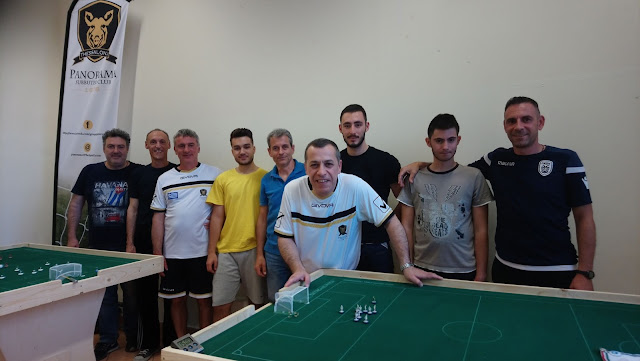 In Thessaloniki, Greece 9 players competed in the club's monthly tournament. Christos Agrios defeated Stavros Giapoutzis (2-1) in the final and Ilias Galanopoulos won the game for the third place against Constantios Giapoutzis.

First trophy for Nathan Urbaniak
In Melbourne, the consolation tournament of the recent FISTF tournament was played under WASPA banner and Melbourne TFC's Nathan Urbaniak took the honors after defeating local player Anthony Madiona in the final.

Eliot Kennedy on fire
The Chastwood players had a small WASPA tournament with 6 players taking part.

Great event in Liverpool
Liverpool TFC keep on developing with some very motivated players. The club's monthly tournament had a good turnout of 8 players. Brian Daley defeated Anthony Dry in the final while Steve Santo won the consolation tournament. 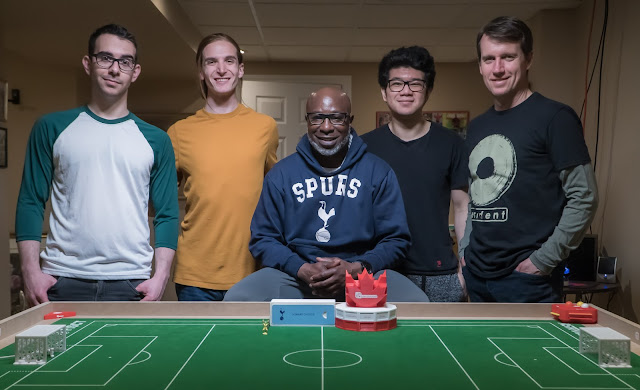 Finally, the monthly tournament of the Toronto Subbuteo club saw five players competing with group games and knock-out games. Howard Christie defeated Richard Ruffolo in the final to claim the trophy. The next Toronto tournament will be played on June 15.

Bristol WASPA Tournament
The Curtain closer to the season was a WASPA tournament. In an attempt to level the playing field players were seeded and then the higher ranked players were handicapped with less players on in their team. Thought it did not seem to slow Aaron down as to romped, Manchester City like, to 16 goals scored in 3 games without reply to pick up the latest WASPA tourney.
Outstanding result of the WASPA event was Barry’s 1.0 win over Malcolm and 2 narrow 1 goal defeats which underlines the progress that he has been making on the arena of baize.
Peter Marshall's 1.1 draw with Adam was a fine result and earmarks him as a dark horse contender for Division 3 next season.

WASPA Tournament Final
2 of the top 3 finishers qualify for the final both had 100% records.
Aaron Skinner 5.0 Bob Fairbrother

In tonight’s games Aaron had rattled in 16 WASPA goals and 5 ‘retro’ goals – that is some going and makes him a hot favourite to improve on this season’s finish in the BSFC Division 1 - could he bring the title home? As for tonight’s Final it bore some resemblance to the FA Cup final at Wembley, like Watford Bob played quite well had did very little wrong but, like Man City, Aaron just had the mood and the knack of opening up Bob’s tight defence with skill, speed and a deft touch. It was 1.0 at half time and Bob was still very much in it...then the floodgates opened! 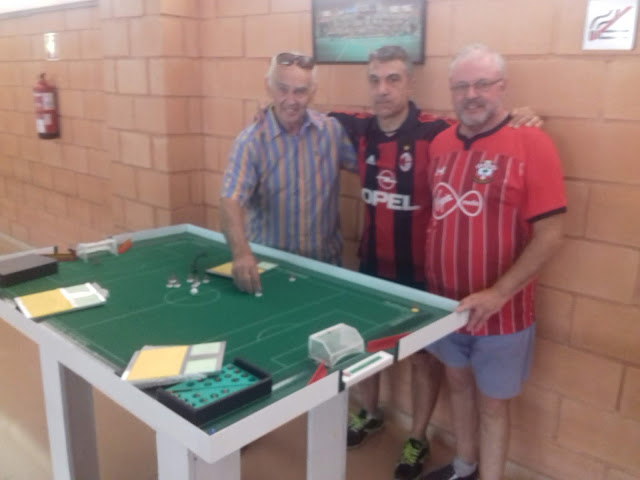 The Marina Citerior club in Spain played the "13th Tea Time tournament" on June 1. Pasquale Carrassi won once again but this time there were many close games and after home and away fixtures, Pasquale took 7 points in four games, just enough to win while David McAulay had 6 points and Bill Dunham 4.
Publié par Vincentcop à l'adresse 13:21