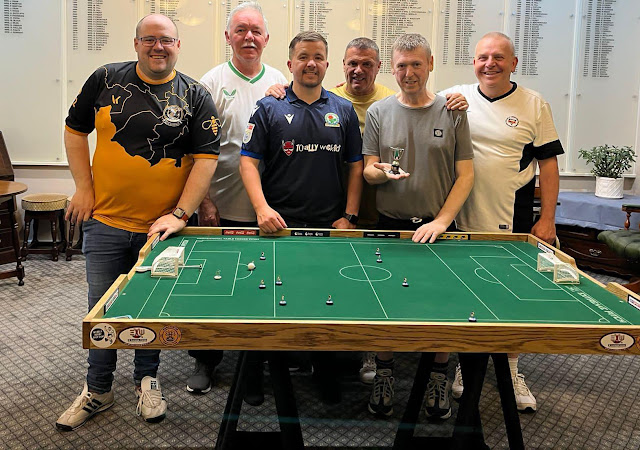 Manchester Subbuteo Club monthly WASPA event was held at our club home of Tunshill golf club and was well attended this month.

Danny and Shaun were joined by Brian Daley, Luca Lanzini and from the North Shields Club, Nick Pearson and Tom Heslop.

Some fantastic matches were to follow and a lot of close results across the board.

The event was won by Brian Daley showing that although he is still on the road to recovery, he is still the excellent player he always was.

Danny edged out Shaun in the final game of the evening 1-0 to take 2nd place. Although he was referred to as dodgy Danny due to a couple of controversial goals throughout the evening. We have been reliably informed that said goals were legitimate on VAR!

Shaun finished third after a fantastic win against Nick but letting a two goal lead slip in the 2nd half in an enthralling encounter with Luca.

Nick finished fourth with Tom fifth and Luca rounding off the table but it was a very close affair with many close games throughout the night.

We would like to thank Nick and Tom for travelling down to support our club night and we look forward to seeing them again soon and visiting the North East to return the favour.

As always we thank Brian for his support of the club and welcome Luca to the club and hope to see more of him going forwards.

Our next club night is confirmed as Wednesday 28th September with all welcome. As always we ask you to contact us as numbers will be limited due to table and space.