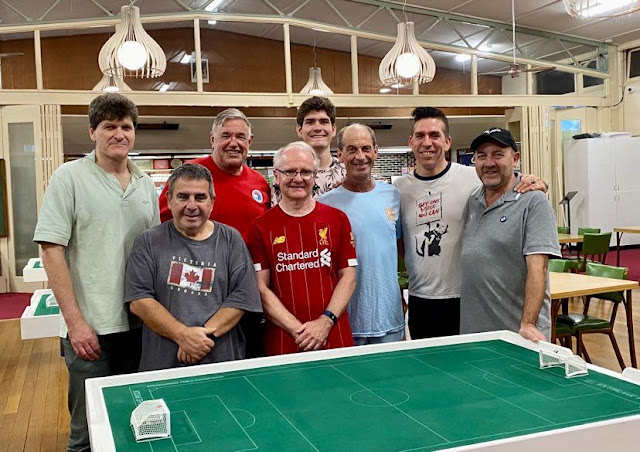 Eliot Kennedy claimed the chocolates when he won the April WASPA at the Northern Falcons, this time played on a Thursday night with the club packed with patrons.

Quite a bit of interest was generated and some calling cards handed out, so the extra vision might be useful.

Eliot started on fire, winning his group, but was pushed all the way by Western Sydney's Franck Cozzarin. Representatives of all four Sydney clubs were in attendance, with Geoff Sirmai (Hipfingerz) and Tony Credentino (Sydney TFC).

Old Falcon Frank Spanyik made his WASPA debut, pushing Geoff all the way in a 0-0 draw. Jonty Brener recovered from an opening 4-0 thumping by Eliot to qualify for the semis.

In another tense match, his semi against Steve went to shots, with Steve uncharacteristically holding out for a 4-3 win.

Tony recovered from his 2-1 loss to Geoff to scrape into the semis.

In the final, Eliot took a 2-0 lead with two great shots, before Steve fought back with a late goal, but Eliot held on to claim the Easter chocolate!