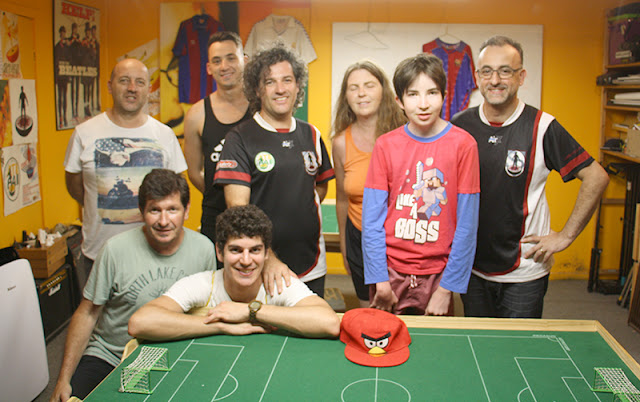 After a holiday hiatus, Subbuteo Parramatta got back into the swing of things with a New Year’s WASPA Tournament on the evening of Monday, January 9, at the Subbuteo Parramatta clubhouse. With newly placed air-conditioning, the normally sweltering in summer clubhouse was cooled to just ‘warm’ and, from all reports, no perspiration was dropped onto any of the pitches. A field of 7 players, representing 4 of Sydney’s clubs, came together to battle it out.

In the opening games, Costa, struggling with strapped knee and elbow (a mix of the stresses and strains of Subbuteo and slot car racing) lost a hard fought match against David. Adrian took a 2 goal lead against Tony before Tony pegged a late one back to make the final couple of minutes uncomfortable. Fabrizio proved too experienced for the improving Heidi on the al fresco pitch in the summer breeze on the verandah.

By the time the pool games were finished, Fabrizio had come out on top of the larger group undefeated, followed by David, then Costa, then Heidi. Paul Magee also remained undefeated, topping the smaller group with wins over Adrian and Tony. So Fabrizio went to the first semi to face Adrian, Paul squared up against David, and Tony and Costa headed outdoors for the Consolation Final. Tony made light work of Costa who was, by now, flagging terribly under his body’s protests, taking the game 3-0. Meanwhile, the major semis went to form with Fabrizio putting 2 unanswered past Adrian and Paul edging David by the lone goal.

In the 3rd/4th play-off, David owned the first half and was finally rewarded with a swiftly moved goal in the dying seconds. In the second stanza, Adrian threw everything at David but he, with some help from the woodwork, stood firm to claim his first competitive victory over Adrian and 3rd place in the tournament. Meanwhile, the grand final proved to be one of the more open games of the evening with both players pushing for goals. At half time, Fabrizio held a 2-1 edge and, in a tighter second half, held on for the victory and his 2nd WASPA title in the space of a month.

An excellent evening of friendly play. Special mention to Heidi’s son Angus who came along and had his first introduction to the game with some friendly flicks with Paul. With the Australian Grand Prix fast approaching, most of the players will all be using the evening’s tournament as a starting point for their intensive training for the next month, while Costa will be heading for some intensive sessions on the physio couch.