Test-match and tournament in Cyprus

Cyprus was in the spotlight this week-end with two very different WASPA happenings taking place on the island.
On Friday local organizer Giorgos Zangylos had the chance to host the first WASPA test-match of the season against Italy's Massimo Dalprà. Massimo lives in Bucharest, Romania and travels a lot for business. The Italian won the series 1-2 (scores were 2-0, 0-1, 0-3) and it was a special game as both players had already played a test-match together in May 2017, which Zangylos won. This is also a great way to remind everyone that test-matches are a great way to create links between players when there are not enough players to organize a tournament. 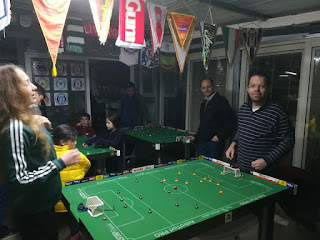 On Saturday, the 5th tournament of the season took place in Limassol. There was a very good field of 13 players taking part with some new faces compared to the previous events. This time it was Marios Nikolaou (Phoenix) who took the honors after defeating Giorgos Zangylos (Famagusta) in the final. Marcos Kalopsidiotis (Salamis) and Demetris Bekos (Erimi) reached the semi-finals. In 5 events 24 different players have already competed in the domestic circuit, which proves the good health of the game in Cyprus.
Publié par Vincentcop à l'adresse 17:55