Last sunday Singapore was hosting a third tournament under WASPA banner. It was a great time for the 12 competitors even if "Mr TFAS" aka Tan Kok Wee could only be a spectator due to a back injury. Nevertheless, players enjoyed their day and many of them gained valuable experience, especially when playing the European player, Stéphane Lambert from Belgium. The group stages ended with the favorites going to the next round. The games became a bit more intense and there were some great matches. The local 'Dark Horse' Henry beating 'top gun' John Ho while 'Leste Home Boy' Rudy Hesty lost the shoot-out to Stéphane Lambert who qualified for the big final.

In the final, it was like David vs Goliath. Mr 'Cool' Henry Peh was to meet the favorite Mr 'Hot' Stéphane. The tough fight began with Stephan pressing from the start causing Henry to make several heroic saves. Stephan striked first blood but the happiness was short-lived when Henry equalized. The match went full circle without any more goals and at the end of full time the game ended with a score line of 1-1. Extra time also did not bear fruits thus the dreaded shoot-out had to settle the game. The shoot-out was tensed with only 2 goals to show for and again both were tied 1-1. The sudden death needed two turns before one had to give in and in the end, Stéphane was victorious. Rudy Hesty finishes third, John Ho is fourth while Faizal won the consolation tournament. 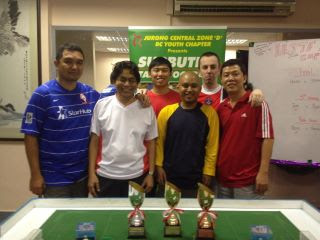 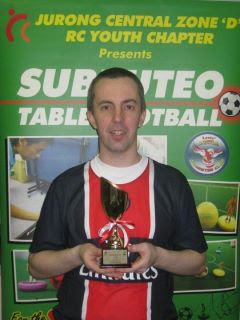 (report written with the help of Rudy Hesty)