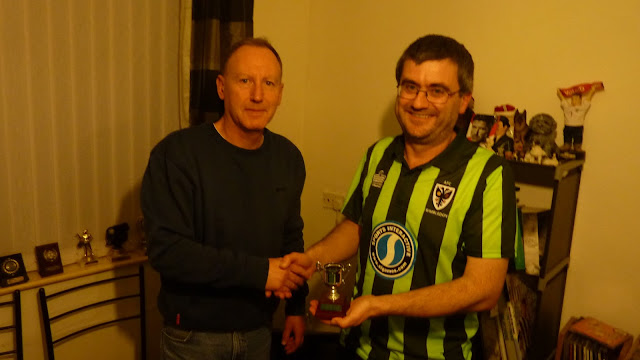 Shock waves rumbled down Trinity Street last night as Nigel Lamond picked up his first WASPA title.  Maybe not as shocking as the language used by the drunken lady who invaded the venue before flick-off!  She was quickly dispatched by taxi to another part of Shields and with the swear box bulging, the action began...

The opener between Andy and Dave was another tight affair.  The pace was hot from the off which resulted in frequent changes in possession and a lot of huffing and puffing.  After half time Andy started to take control and scored a real cracker that looped into the top right hand corner. Despite working hard, Dave could not find that recent good form and Andy edged it 1 - 0.
Dave played Nigel in game 2.  From the off it was apparent that Nigel meant business.  He kept his defence well organized, kept good possession, created good chances, passed well, flicked well and was cool with his finishing. Dave just could not find that touch and was frustrated by Nigel's possession play. 2 - 0 to Nigel.
The decider between Nigel and Andy was a great game.  Both players really went for it but never lost their shape.  Some aggressive attacking play from Andy, thwarted once again by Nigel's cool possession play and some great flicking all around the pitch.  Both players had chances to win this game but it was Nigel who took advantage of a defensive error to slot home.  Andy really pressed hard for the last few minutes but couldn't find that final pass he needed.  1 - 0 to Nigel.

Another great little tournament in Shields. Thanks to Chris Kaberry for refereeing and Andy Mill for his hospitality.  Well done lads!
Publié par Vincentcop à l'adresse 22:07