The WASPA results file is now updated. The ranking of May is included. You can from now on download the file from the DOWNLOAD section (right column).
Publié par Vincentcop à l'adresse 12:30 No comments:

Attard Subbuteo Club held a local tournament on May 23 (which didn't count for the WASPA ranking). Eight players were competing and after the group stage, the semi-finals were very exciting games. Nicholas Sciberras beat Darren Bezzina on shots after a 3-3 draw while Angelo Borg beat Daniele Spadaro on shots after a game with no goal. Spadaro later wont he 3rd place final while Angelo Borg easily won the final against Nicholas Sciberras (3-0).
Publié par Vincentcop à l'adresse 09:46 No comments: 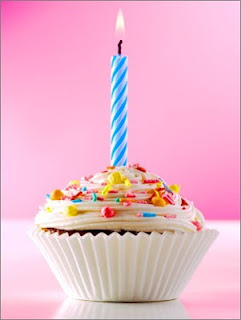 Just one year ago, the very first WASPA tournament took place in Simi Valley, California (USA). After 12 months, many things changed and 27 tournaments were played in total, attracting 160 players from 15 countries and from all continents. Daniele Spadaro (Malta) is currently the number 1 player in the WASPA ranking and Malta is the reigning nation. Geoffrey Marain (Belgium) is the only player to have won three tournaments.

So what can we expect for the next 12 months? Let's hope many more tournaments will be held if possible also in new countries, many new players will be involved and more importantly the spirit of WASPA will remain with key words such as fair-play, respect and passion. We can also hope the people who had a negative feeling about WASPA will change there mind and see that having different associations can only be good for the beautiful game of table football.

With the relaunch of the brand SUBBUTEO in the stores, there will be new potential players in many different countries and WASPA will be there to give them something. Let's play on!
Publié par Vincentcop à l'adresse 08:58 No comments: 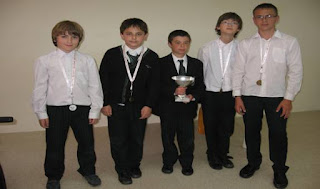 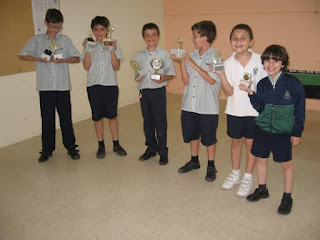 Here are some pictures of the presentation of the trophies at the San Andrea Subbuteo School league, the development league of Attard Subbuteo Club in Malta. Congratulations to all the people involved for trying to get fresh new players playing the beautiful game. 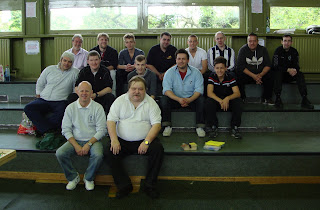 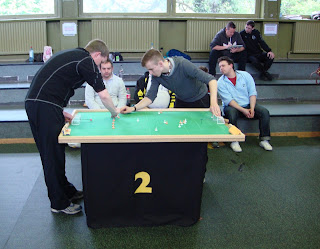 There was a lot of fun and excitment last week-end in Berlin (Germany) where the local club of Sparta Spreeathen 74/82 was organizing the 27th Berliner Bären Pokal. Players were not only coming from Germany but also from England and Denmark. The Berliner Bären Pokal is a very special that is played with the old German rules, with large ball and without referees. The main event attracted 16 players and there were a lot of close games. In the end, Anders Buhl Hansen (Denmark) beat Björn Kegenbein (Germany) in the final (5-3) while Michael Stolzenberg was third and Marcel Kwiatkowski was 4th. Phil Holmes (England) won the 50+ tournament while Björn Kegenbein won the U20 event. Rasmus Lund won the tournament organized for the players who were there only on saturday. There was also a small tournament for national teams where germany was 1st, England 2nd and Denmark 3rd.
Publié par Vincentcop à l'adresse 09:41 No comments: 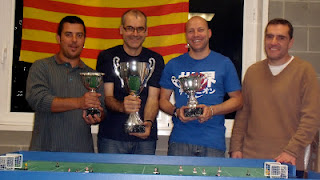 In a great tournament with 15 players from the local club of Palomar FT, local organizer Flavio Watzka proved to be also a good player as he lifter the trophy of the second WASPA event held in Barcelona. The competion had a very special format with 5 groups of 3 players and then a barrage between two of the group winners to decide who would qualify for the final round. The last stage of the event was a group stage between the top 4 players of the evening and in a very close group, Flavio Watzka managed to win the tournament after winiing two games and drawing against Dani Muñoz. The event ended in a nice atmosphere and there are hopes that more players will joing for the next event.
Publié par Vincentcop à l'adresse 11:10 No comments: 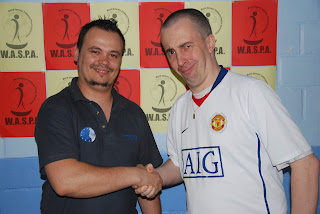 We had a nice tournament in Templeuve. There was a low turnout of 6 after we had a few late dropouts but there was fun anyway. Geoffrey Marain won his third tournament, beating Stéphane Lambert in the final, Vincent Coppenolle beat Elodie Bertholet in the game for the 3rd place. Vincent was using a liverpool set of the brand new subbuteo range. Renald Deloose is 5th and Samuel Verriest 6th. The Templeuve gys hope to have another tournament with more players involved in June. Picture: Geoffrey Marain and Stéphane Lambert congratulate each other after the final.
Publié par Vincentcop à l'adresse 07:27 No comments:

There were a lot of comments in the last few days about the possible change to have WASPA tournaments with only three players instead of four. A mail has been sent to several tournaments organizers and players and, apart from two people who didn't really know if a change like this would be a good thing, everyone gave support. The idea is not to lower the standards of organisation but just to help smaller associations and isolated groups of players. In countries such as Australia, Canada or the US, it's difficult to get players together for a tournament because of the long distances between cities. Also, in the last few months some tournaments were held with only three players. Despite of the efforts made by the local organizers to have something great, the tournaments could not count for the WASPA ranking and archives. Hopefully the change will motivate more clubs and players to organize tournaments under WASPA banner. The idea is to have more nations involved in the near future. The decision is therefore taken with immediate effect. 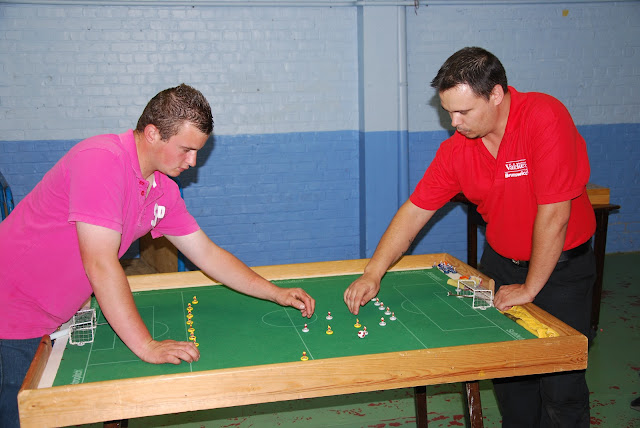 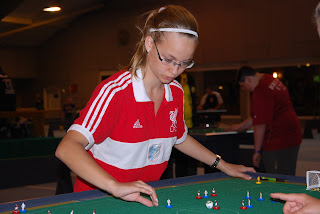 On Saturday, July 28th the Southern California Subbuteo Club will be honored to host the Baumelers' in a Subbuteo gathering, probably a tournament of some kind. Wayne Smith is shooting for WASPA and ASA. The Baumelers are from Switzerland and are very good players. Trisha (see picture) is the top ranked woman in FISTF's world rankings and her dad, Thomas is maybe a little better. Who is planning on being there? Hopefully many players from California will make it.
Publié par Vincentcop à l'adresse 15:08 No comments:

A second tournament in Barcelona

After the success of ther very first tournament, the club of Palomar Futbol Taula will play the "1er Torneig Waspa provincial de Barcelona" on May 10 at 7.30 pm at the "Pavelló Municipal Esportiu F. Calvo de la A.E. Sant Andreu - Pere Manyanet s/n - Barcelona". To be noted that Flavio Watzka, the organizer, will also host a tournament for childrens between 9 and 12 at the "CEIPM Turó Blau - Carrer Sant Andreu, 2 - Barcelona" on May 13 at 11.00 am. Good luck to all the spanish players involved. Details from Flavio at flavio@parada13.jazztel.es
Publié par Vincentcop à l'adresse 16:47 No comments:

A great Super 8 tournament in Singapore 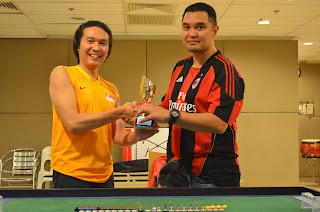 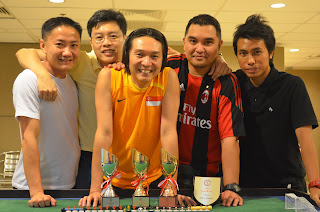 The Super 8 tournament on May, 2012 managed to attract 10 of the best available Singapore players. The tournament did not start as planned, as one of the players, Rizal from Elias Subbuteo Club had to abruptly stop his game due to illness while playing the 1st match. Thank god! Our boys managed to get help and he was rushed to hospital. Rizal was eventually discharged from hospital a day after and now is recuperating at home.
Well, the game had to go on and the 10 players which were divided to 2 groups battled the day away. Group 1 tagged as group of "death" had several intense game. However in the end Kok Wee managed to crawl to the top of the group while John Ho and Christopher Soh secured the quarter final slots. Group 2 games were tight and only could to be settled in the last game where Rudy just managed to pip Henry to the top by a single point.
The barrages round saw Henry and John Ho progressed to the semi-finals while Joel and Haikal secured placing in the consolation finals.

The first semi saw Kok Wee, fresh from winning the Hong Kong WASPA open, beating his opponent by two goals. While the second semi saw Rudy claw back from a goal down to draw level with John in full time before winning in the shoot-outs.
The third placing was won by John Ho by a 3-0 score line while the consolation prize winner went to Haikal.

In the end, the stage was set for the final between Kok Wee and Rudy. Most predicted a low scoring game however both players did not follow their script and dished out an avalanched of goals making the finale to be the game of the day.
The first half saw Rudy racing into a two goal lead but the second half saw a rejuvenated Kok Wee suddenly scoring three goals. The game was set to be over as the clock was ticking down, however with 4 minutes left, Rudy digged deep and equalized bring the full time score to 3-3. The game was thus brought to extra time and again the finalist did not disappoint, as two more goals were scored ending the game 4-4 thus it had to be decided by shoot-outs. In the end, lady luck was smiling at Rudy, as he managed to win the shoot-out (2-1) in sudden time.

Rizal was awarded a point for participation of event even though he had to abandon play during the first game. He had a sudden heart seizure due to the excitement of game play but luckily nothing serious came out of it. The Singapore association is looking forward to organise more WASPA events and hope more players outside Singapore could join.

(Report made with the help of Rudy Hesty)
Publié par Vincentcop à l'adresse 11:35 No comments:

Marg Gauci is a WASPA winner

Mark Gauci (Atlas TFC), one of the best players int he world, won the "Local Council Cup" organized by Attard Subbuteo Club on May 1. The Maltese champion defeated Angelo Borg (Pireas Lions) in the final (2-0) while Alfred Fenech and Simon gauci reached the semis. 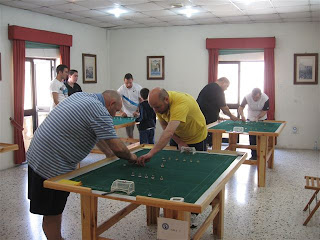 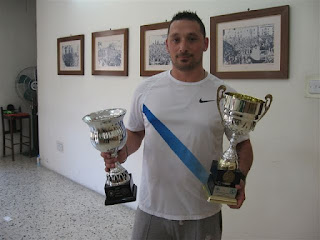