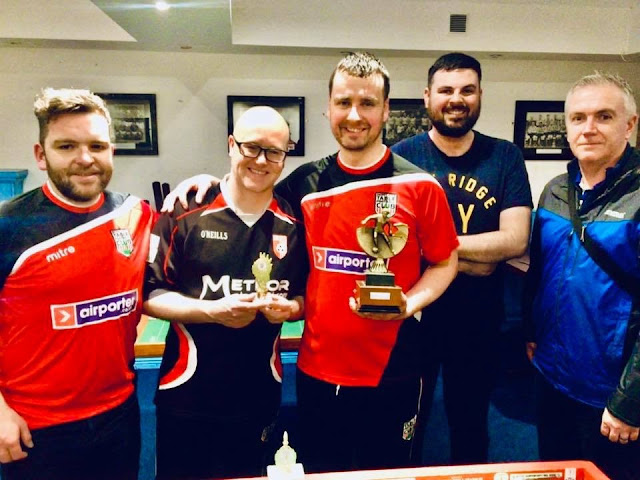 Well the winter cup lived up to its name , with a significant snowfall on the eve of the competition in Derry the event looked in doubt , but 5 hardy souls finally assembled at the DerryCity SocialClub to contest the WASPA event .

Stewart (Belfast) Mór and Rodgers (Donegal) all made the trip while local lads Morrow and Watson (Derry) completing the line up it was all set for a cracking event .

The first round of fixtures threw up the arch rivals Stewart and Watson to contest the Stand Firm Cup a competition played between 2 rival Scottish football fans of the old firm. Stewart the current holder was under the cosh for most of the first half but a one of counter attack and his first shot on target was enough to seal the win and retain the trophy despite a second half of sustained pressure that seen Watson have 10 shots on target, in the other game Jude Morrow and his Melchester Rovers side took on competition favourite Brendan Rodgers and it was a early statement from Rodgers with a 3-0 victory for the Donegal man.

The next round of results seen a brace of Draws with Watson and Mór tie 0-0 and Morrow and Stewart also opting for the bore draw.

Round 3 seen a thrilling 1-1 draw between Stewart and Rodgers enough to see Stewart go top of the table and a 1-0 victory for Mór against Roy of the rovers Jude Morrow .

Round 4 was seen Watson revive his title ambitions with a 1-0 victory over Donegal subbuteo’s Brendan Rodgers while Oisin Mór held on for a 0-0 with Craig Stewart to put the final round of games into a exciting climax .

With Stewart playing all his games he sat top of the table going into the final round of games , a draw for Mór against Rodger would be enough for a shootout with Stewart for the win with both having the same goal difference , a win for Rodgers would be a
Enough to walk away with another title , while in the other game a win for Watson against Jude Morrow and a draw in the Rodgers Mór game would hand Watson the title . Despite efforts by all it was a double 0-0 draw that seen Mór and Stewart both finishing top on same points and same goals to head to a penalty shoot out , both players have never won a monthly WASPA so it was going to be one hack of a shootout.

A early goal for Stewart was followed by a early miss by Mór which  would be one of 4 misses that would see Craig win 2-0 on shots and take his first ever WASPA completion proving his experience in the Europa league as a guest player for Wolverhampton was good enough for the Belfast to take home the top prize . Oisin Mór will go back to Donegal happy with his first runners up prize and them vital WASPA points while Brendan Rodgers took 3rd spot on goal difference to Lawrence Watson and Judd Morrow took 5th place with 2 fantastic draws against Watson and overall winner Stewart to back up in amazing 2-2 draw with Mark Farrell earlier this month in the championship round 2. Morrow is starting to prove his Roy of the Rovers side are the real deal.
Publié par Vincentcop à l'adresse 20:27