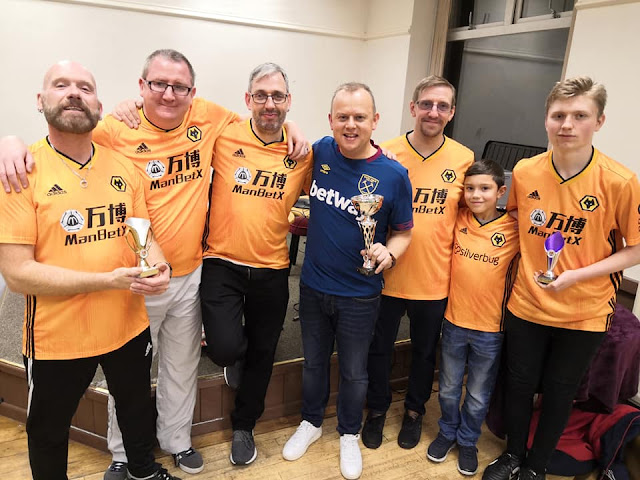 The 2nd Wolves Open event saw Wolves Table Football Club join forces with the English Subbuteo Association for the first time.. Twenty-two players from all over England (and even some from Wales) came together for the event at the Electric Club in central Wolverhampton.

The quality of players was probably the best at any event held by the Wolves Club to date and included a number of top youth players too.. The main event started with 4 groups of 4 players and two groups of 3 players.. It meant that the top two from each group qualified.. Most groups finished as expected, with the top 6 players seeded across the 6 groups - all qualifying. The second round was 4 groups of 3 teams.. The non-qualifying players played for the plate.

In the plate event, the final was between Wolves TFC's own Mick Hammonds and Darren Barnes. Mick ran out 3-1 winner in another tight game..

On a tough day for the youths, mainly due to the quality of opposition, it was again a Wolves TFC player, Gage Badger that scored the most points in the group and progressed the furthest in the competition that won the Best Youth Trophy.. This was particularly impressive as Gage was also playing with a broken left hand and found it difficult to control his goalkeeper.
All in all another very successful event, at a brilliant venue in the heart of Wolverhampton - that once again provided a fantastic lunchtime meal for all... The Wolves TFC Team all sported their old gold Wolves Sponsored Kit to give the event some colour..