October was another busy month for table football players in Australia. After the Sydney TFC tournament (https://waspa-circuit.blogspot.com/2019/10/fabrizio-coco-wins-october-tournament.html), six other events took place in the last few weeks.

The Northern Falcons Table Football Club had a great day of table football with 8 players taking part. Congratulations to Eliot Kennedy who won the event. "A good night of action, some great play, and some stunning results. In Group 1, Fab edged out Steve in a tight tussle 2-1 while Daniele did the same against Jonty 1-0. Steve and Daniele then battled to a 1-1 draw, while Fab went crazy against Jonty. To his eternal credit, Jonty bounced back against Steve, absorbing some serious pressure before striking twice on counterattacks and then knocking a third one in for good measure, while Fab overcame Daniele 2-0. In group B, Eliot beat Tony 2-1 while Adrian and Neil fought a tense 0-0 draw. Eliot stamped his authority on the group with a 3-0 win against Adrian, and Tony beat Neil 4-0. Adrian had a chance to make the semis, but fell 2-1 to Tony, while Eliot claimed a 2-0 win against Neil. In the semis, the upset of the night was Tony's 2-1 win over Fab, while Eliot and Daniele played some lovely stuff before Eliot won 2-1. In the final, an early goal within three minutes was enough for Eliot to claim the event", reported local organizer (and FISTF president) Steve Dettre.

There was a Western Sydney WASPA tournament on October 10 with 5 players taking part and competing in a league format. Vince Micallef finished on top with 10 points while Ray Micallef (8), Costa Kamarados (5), Ben Gilbert (3) and Louis Micallef (1) also took part.

In Brisbane, the October tournament had a small turnout of three players but it was a memorable time. It was Giuseppe Tardiota's last tournament before temporarily going back to Italy for a couple of month. Giuseppe won the tournament after home and away fixtures while Gus Gillespie was runner-up and Gareth Whalley was third. 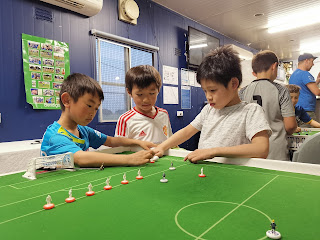 In Melbourne, the Western Flickers played their "Ocktoberfest Cup" in a special way. With many of the "Pelicans" galivanting around Australia and the World, they held a WASPA for their newer Flickers. The tournament was run in a simple Round Robin format.

We welcomed Brinley Ang and Ben Ong who were playing in their first tournament after rediscovering the game at the recent successful Singapore Community Day table football promotion. Congrats to the ever improving Peter Benholm who secured his maiden WASPA win.

Still seeking his first WASPA victory, unlucky Benedict had to settle for his third consecutive WASPA runners up finish - and all to different winners too!

October saw also the first tournament of the newly-born Central Victoria TFC. The event took place in Ravenhall on October 31. Steve Wright took the honors after finishing on top of the table while all three players played home and away games. Arjuna Hanafi was runner-up while Kevin grant ws third. There will be another event on November 23 and interested players can contact Kevin Grant for details.
Publié par Vincentcop à l'adresse 14:49