The honors for Raffaele Lombardi in Singapore 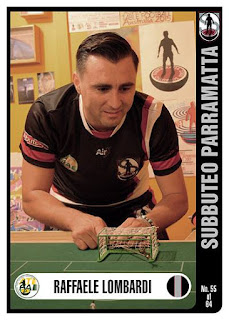 Congratulations to Subbuteo Parramatta's Raffaele Lombardi at the Asian cup over the weekend. Drawn into a group of death alongside eventual tournament winner David Ruelle and one of Singapore's top players, Den Mulia, he bowed out at the group stage but then successfully manoeuvered his way through the WASPA tournament to take the title with a 2-0 win over Steve Dettre in the final.

16 players from Singapore, Australia, Belgium and Japan attended the WASPA event. Results were as follows: