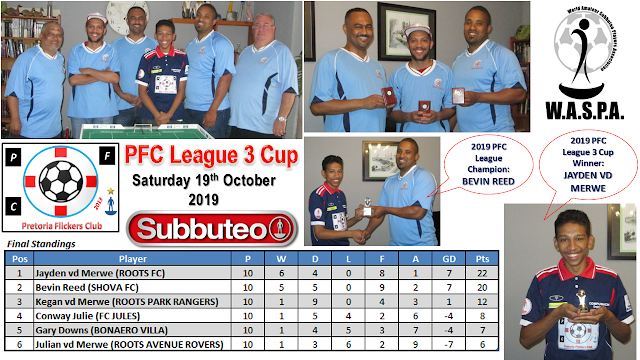 Saturday 19 October 2019, Kempton Park, South Africa :
Pretoria Flickers Club travelled to Bonaero Park for the staging of the 3rd and final leg of this year's League Championship. We had 6 players competing for the PFC League 3 Cup.
Pre-tournament favourites Bevin Reed and Jayden van der Merwe appeared to have laid the ghost to rest of their respective dismal runs during the League 2 Cup back in August. Indeed it was these two players who set the pace from start to finish, with Bevin leading the standings right up until Match 29 and Jayden constantly occupying the 2nd spot all day.
Kegan van der Merwe had a big say in his four scheduled matches against Bevin & Jayden, as Kegan managed a draw against them in all four those matches.
Those draws ultimately cost Bevin the individual honour of 2019 League 3 Cup winner, whereas the draws cost Jayden the honour of overall 2019 League Champion.
In the final match (Match 30), Jayden was only 1 point behind Bevin. A calm and patient approach by Jayden was rewarded as he triumphed by 2-0 over Conway Julie, and in so doing Jayden managed to retain his League 3 Cup title. This latest triumph also marks Jayden's 22nd WASPA title to date!
Although Jayden emerged as winner of the 2019 League 3 Cup, the triumph was not enough for him to retain his title as overall PFC League Champion. In the end Jayden only accumulated 39 points over the three League meetings. The honour of overall 2019 PFC League Champion was bestowed upon Bevin Reed as he managed to accumulate a total of 40 points over the three League meetings! Another closely contested League campaign in the end!

Individual acknowledgements on the day :
"Goal Blitz" : Bevin Reed ended the day as the top scorer
"Player of the Day" : Kegan vd Merwe for his 3rd place finish, boasting an unbeaten run on the day as well
"Fighting Spirit" : Conway Julie for his 4th place finish

A big thanks to Gary Downs and his wife for hosting us, and the serving of a wonderful lunch on the day.

As always, a big thank you to all who attended to make the day a great success. Next - the PFC Scudo Campioni event.