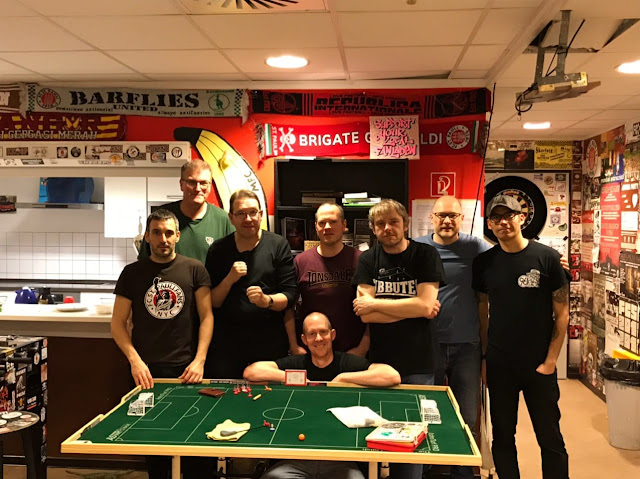 Subbuteo Sankt Pauli hosted our 5th monthly WASPA of the season with 8 players travelling from as far away as Hannover to compete. For the first time this season we deviated from our league or Swiss ladder format with two groups of four battling it out for the title.

Group 1 hosted previous winners Sven & Marius along with Marcos and Fred. After two round of games Marius topped the table with 4 points, Sven and Marcos on 3 apiece and Fred on 1. Marcos and Fred played out a 1-1 draw while Sven claimed top spot in the group with a tight 1-0 victory over Marius who claimed 2nd spot thanks to his win over Marcos.

Group 2 was more pedestrian with the winner of the two previous competitions Simon winning all three games against Philip, Andre and Ralf to finish 1st. Philip beat Andre and drew with Ralf to finish 2nd.

In the plate Marcos beat Andre 2-0 to set-up a 5th place playoff against Fred who triumphed over Ralf on shots after a goalless draw. There were no goals this time following their 1-1 group game and it was Fred who took 5th place with a comprehensive 3-0 win on shots. Andre avoided the wooden spoon thanks to 2-1 shots victory over Ralf.

Group 1 winner Sven edged a tight encounter with Philip 1-0 while Simon overcame Marius 2-0 to set-up a final between the two seeded players. In the 3rd place playoff the oldest rivalry at Sankt Pauli was rejoined with Marius coming out on top against his oldest rival with a 2-0 win.

The final itself was a tight affair with Sven having the best of the early chances but unfortunately shooting wide when he should have hit the target. Simon came more into game and forced a good save from Sven before he saw the last chance of the game crash off the crossbar and post to roll harmlessly out for a throw-in. And so it was to be shots once again that decided the victor. Simon won the toss opting to shoot first, but the toss was all he was to win as his first four efforts were all saved by Sven with Sven scoring 2 of his four to win his second Sankt Pauli WASPA.
Publié par Vincentcop à l'adresse 21:25