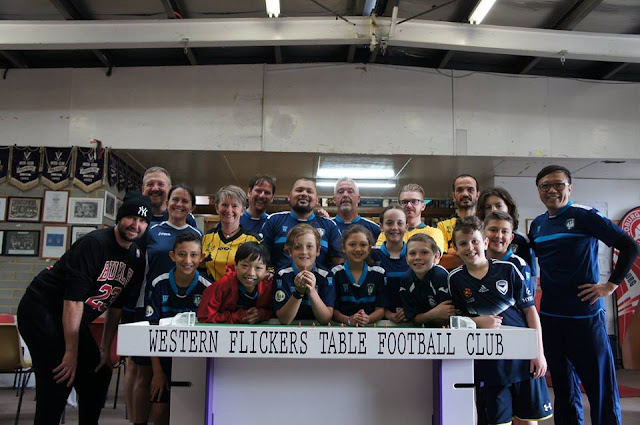 The Victorian Championships returned for its 2018 version with The Ngs, Benny and Benjamin, looking to retain their Open and Junior titles. They were joined by 9 other Open players and 7 other juniors making 18 players in total at the Coburg Athletics Track clubrooms.

The Open players were split into 3 groups. Group A comprised defending champion Benny Ng, Kevin Grant and Anthony Madiona from Western Flickers. With Benny defeating both players, it was left to the other two gentlemen to provide the game of the tournament. Anthony swiftly took a 3 nil lead, but true to the form of the Liverpool team he plays with, he choked and by half time Kevin had pulled back 2 goals. The 2nd half promised so much and delivered a tighter contest with neither player able to add to their first half tally. Thus Benny advanced to the semi finals and Anthony to the Barrage, with Kevin going to the Plate. 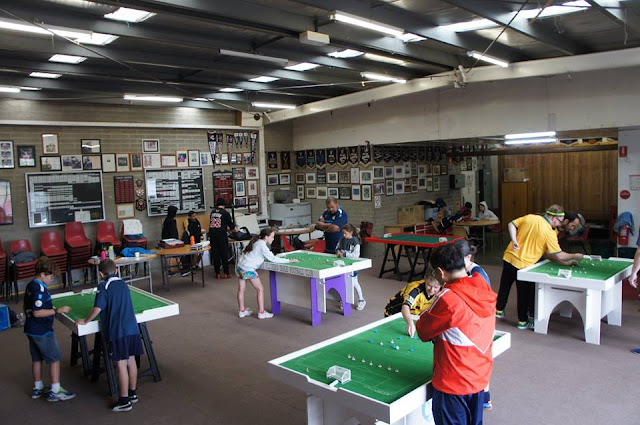 Group B comprised Luke Radziminski from Melbourne TFC, Christos Garagounis from Northern Phoenix and Arjuna Hanafi from Western Flickers. As with Group A, Luke won his 2 games advancing to the semi finals. Arjuna and Christos battled for 2nd place in the group and another tense battle ensued. However, neither player could break the others defence down and a 0-0 result meant that Christos advanced to the Barrage based on his 1-0 loss to Luke.

Group C was a 4 person group with seeded Simon Briffa, Steve Wright and new lady Juliette Littlewood from Western Flickers and Beth Eveleigh from Northern Phoenix. 6 games, 6 results, 4 by the narrow 1-0 score line.  At the end of the group Simon and Steve progressed with Simon topping the group courtesy of a 1-0 win over Steve. Beth finished 3rd and Juliette in only her 2nd tournament performed admirably with some really close games.

The Barrage round was set with Simon against Anthony and Christos against Steve. Simon cruised to a 2 nil victory, while Christos and Steve played a tense 0-0 draw that could not be settled after a further period of extra time.  A controversial shot shootout ensued which Steve eventually won 2-0.

The competition moved into semi finals. Luke outclassed Simon 4-0. Steve took a 2-1 half time lead but could not hold on in the second and Benny came from behind for a 3-2 win.

The final was another tight affair, with both Luke and Benny having their chances. However, Benny managed to take 2 of his and ran out as a 2-0 winner and secure his 2nd consecutive Victorian Championship. 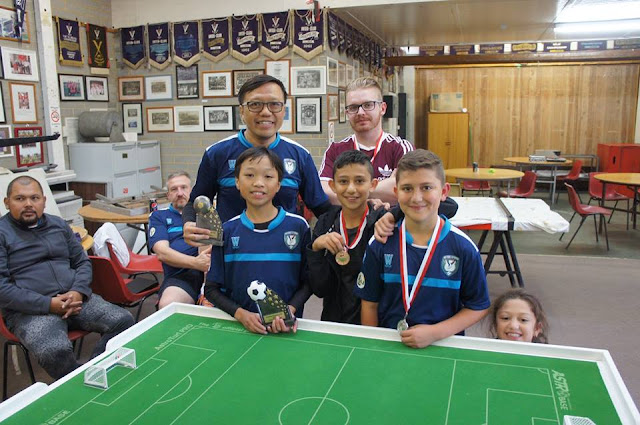 The 8 junior players were split into 2 groups of 4. In group A, Benjamin secured 3 wins to top the group without conceding a goal. Billy started with a 2 nil win over Liam and a 2 nil loss to Benjamin. With Liam defeating Jayden 1 – 0, it left Billy needing a point with Jayden to secure advancing to the semi finals and he achieved that with a dramatic goal. Newcomer Liam secured his first win in a WASPA and played well in his other games.

In Group B, The Briffa brothers once again met in the qualifying rounds and they played out a 1 – 1 draw. With Charlotte losing to Alex 1-0 and both players defeating Crystal, it left Alex qualified and Charlotte needing to beat Harrison to advance to the semi final. Despite a tense game, she was unable to break the deadlock and Harrison advanced. Crystal managed goals against her two brothers and played really well and is developing her game.

Semi finals matched Alex and Billy and Benjamin and Harrison and both group winners eased through 2-0. The final was another tense affair with many chances but no opportunities taken. A 0-0 result meant that the game went to sudden death extra time, first goal wins, and after about 2 minutes, Benjamin managed to craft himself an opening and take the game with a 1-0 win.

So both father and son Ng managed to defend their Victorian Championships in 2018 and we await another exciting chapter next year.

I must thank the following for their assistance in running the championships; Kevin for his tireless efforts with boards and Tony for bringing mini-Anfield; Arjuna and Kevin for the interval BBQ; Simon for getting the trophies and Adrian for organising the schedule. And thanks to the three Victorian clubs for being represented and making the Championships a success.
Publié par Vincentcop à l'adresse 17:22